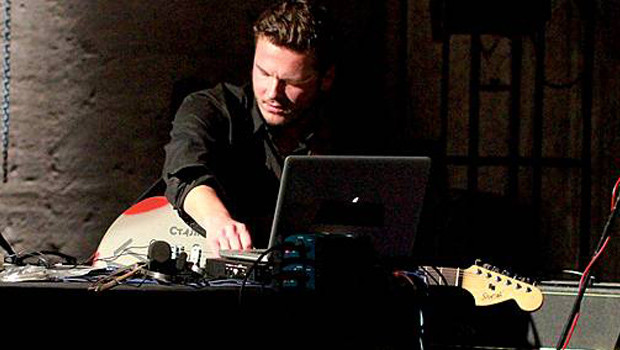 TPA’s Roger Trenwith had a brief chat with Slovakian guitarist David Kollar, one third of new horror-improv band KoMaRa, in conjunction with his review of their imminent new self-titled album, released on 30th June 2015. You can read Roger’s review of the album HERE.

How did KoMaRa come together?

I contacted Pat and sent him my last solo album The Son which received “Record of the Year” awards in several countries. Pat invited me to a Crimson ProjeKct gig and we had a short talk in the dressing room. Then we started to talk about possibilities to play. I invited my friend Paolo Raineri and in November 2014 the first tour happened. It was totally improvised, as was our studio session.

The spelling of the band name suggests a link to the King Crimson ProjeKcts family – was that intentional?

Hah, it was Pat’s idea and it sounded good to my and Paolo’s ears. We could have just used our names but as we became a proper band it was better to have a band name.

Owing to a complete curfew on hard copies or even downloads prior to the release date, I made do with an invitation-only Soundcloud stream of the album for the purposes of my review. The title of the album on Soundcloud was listed as Dirty Smelly – not the most obvious album title! Why was it chosen?

I created the song Dirty Smelly in my studio in Prešov (a city in eastern Slovakia) and Pat overdubbed it with Paolo. Our producer Adrian Benavides pushed the song to the final version. So the idea was to call it like that. But Dirty Smelly is just the name on the vinyl version. The CD and download is just KoMaRa.

Is the music entirely improvised? Are there particular tracks where the idea is mainly from one player, or is it a collective thing?

There are a few tracks I created in my studio, then the other guys overdubbed them and Adrian finished them as producer. Other songs are created just by improvisation with some overdubs.

How long did it take to record the album?

We improvised for a couple of hours, maybe longer in Faust Records Studios in Prague in November 2014. Then from December onwards we started to work on it. It was like three months to the final masters.

The cover art is quite remarkable. Tell us how that came about.

The cover was created by the amazing Adam Jones from Tool. We asked him if he had any ideas and he sent us The Creature which is on the cover now. I’m really happy that we got that cover from him. Tool is an awesome band and like Adam I’m also connected to film music. He works on big films like Predator, Terminator etc…

I notice from a live video on YouTube that like Robert Fripp, you sit down while playing. Any reason?

No, no, it’s not because of Fripp. I never copied others and didn’t want to be like them. I’m sitting because I need to use both feet to control the pedals and it’s more comfortable for me. I’m still working on my own sound and music language. Trying to push my guitar playing to another different level.

The band have already played live. Are there plans to do any more gigs to promote the album?

Yes, In July we have few gigs in Slovakia; Hevhetia label festival, Pohoda festival and a concert in my town, Prešov. Then next year in March something will happen and we are also thinking of releasing a live concert.

Our readers may not be familiar with your name. You have a very individualistic style. Who are your guitar playing inspirations?

When I was a kid – about 12 – it was Gary Moore, then I started to love Miles Davis and I was copying his trumpet solos and phrasing by ear. Later it was John Scofield, Robben Ford, and then I wanted to do it my own way. I found (Norwegian guitarist) Eivind Aarset and played some gigs with him. He helped me a lot to find my own way. He is really great in modern guitar playing.

These days I’m not listening to many guitarists. I have lots of work with films and my projects, and I work from 8:00 in the morning on my own guitar playing. I play every day 50 minute long improvised solo gig in my studio and then I’m listening to it and thinking where can I improve and do better.

Well, there you have it…thanks for your time David, and we wish KoMaRa all the best.