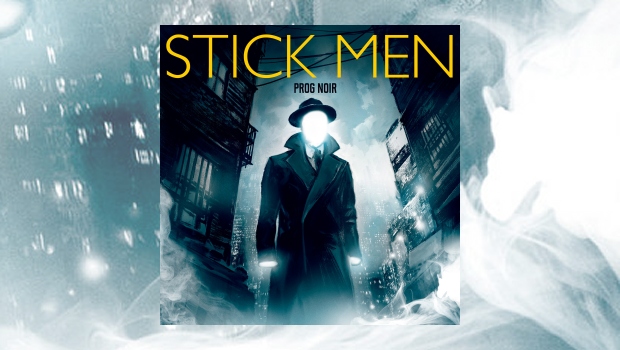 What is a Stick Man? Documentary pictures taken in the 1950s by the celebrated bloke Laurence Stephen Lowry (RBA,RA) show matchstick men with their matchstick cats and dogs making music. Bored with these omnipresent artists of that time who were simply banging rocks together but not using Sticks, people like Albert “Elvis” Costello and Gene “Hack-man” Vincent, Lowry decided that this new “Rock Music” was a cul-de-sac. He would often be found at the back of venues yelling “You stink!” at Tommy Steele. Sticks were the obvious way to go, so he decided to find the stick-like people that he had documented in his pictures, persuade them to tap strings instead of bang rocks and form a band that was also made of sticks and invent a far less smelly genre: Stick‘n’roll.

At first Lowry could only find Tony Levin and the subsequent album, Stick Man, was to become the basis for what was to come. What started as a Levin/Lowry project has now grown beyond that. Having scoured the small ads for innovative musicians with impeccable personal hygiene he found an American fellow made of sticks called Michael Bernier and later a German man made of sticks and a large American fellow who hits hollowed out trees (arguably a tree is a big stick) with sticks, it became a Levin/Bernier/Mastelotto/Lowry project. When Mr. Bernier left to boldly pursue a career holding up saplings in Central Park, NYNY, Herr Reuter joined. By now they had, reluctantly, eaten Lowry – as in the early part of the 21st Century cannibalism had yet to be banned by the music industry, especially when touring musicians couldn’t get to the Internet. Stick’n’Roll lived on… just!

This latest Stick Men release goes for a subtly accessible vibe – remember the music from the advert for that aftershave, banned by the Geneva Convention in the early 1970s? Remember the music in the advert about old, over-spiced monks drugging villagers in nightclubs (or something)? There’s a bit in there where the Stick Men properly splash it all over the place.

The album opens with “that Stick sound”. If for no other reason this album should have been a must for me. That famous sound of Mr. Levin’s compressed Stick is perfectly complemented by Herr Reuter’s Touch Guitars® and the drumming of Mr. Mastelotto, at times as powerful as that Brut, Henry Cooper really mashing up a sparring partner with ‘Enry’s ‘Ammer, reinforcing the percussive style of the tapping instruments that he accompanies. (Gawd bless ya, ‘Enery Coopah)!

Extreme, technical proficiency is to be expected from three sticky musicians of such impeccable pedigree and impressively stocked toiletry cabinets. Atonal or polytonal sounds and complex rhythms are used in many places to good effect, as are the tempo and time signature changes that we like to hear in our progressive rock. Vocals, in stark contrast to the riff-based, powerful, driven music, are curiously reminiscent of a style that would not be out of place in a Rogers and Hammerstein musical, though only two of them could actually wash that man right out of their hair. There’s some serious riffs here, as in the opening title track and also a hint of surreal humour. I loved the aforementioned cheeky nod to Carl Orff, and to Yes and Tchaikovsky.

Even as a massive fan of tapping instruments and their potential to change the direction of music, there were times when, to be honest, I could see how one might lose interest in some of the tracks. There is evidently a degree of experimentation on this album but these tracks are the least accessible for me, although they don’t stink. Some tracks, however, definitely transmit on my wavelength. Smell, if you will, Rose In The Sand. Tapping instruments can provide the mood, the melody and the percussion that we need in music. There will almost certainly be a track on here for everyone. For me, if it only had the title track and closing track then this album would be worth owning. I would give this several of those sticky album points out of ten.

Of course, rocks are still being banged together and Lowry’s vision of the new Stick’n’roll may never have become the mainstay of popular culture, but the spirit lives on in this Sticky, but fragrant album.