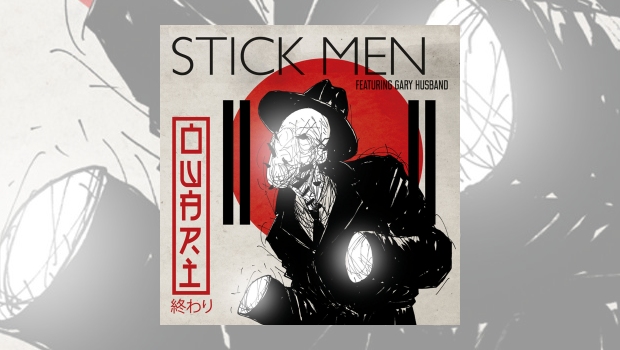 Do you get the feeling you’ve been overtaken by events beyond your control, this past year? Spare a thought for Pat Mastelotto, Markus Reuter, and Tony Levin, plus special guest Gary Husband, aka Stick Men. In mid-2019, MoonJune Records head honcho and tour promoter par excellence Leonardo Pavkovic was putting together a small but perfectly formed jaunt around the Far East for the band, scheduled to take place in early 2020. This included four nights in mainland China, virgin territory for them, as well as four nights in Japan, and a gig in Hong Kong.

The dominoes were stacked up, and travel plans made when the first of several disasters befell the itinerary. The Hong Kong show was pulled due to the ongoing political unrest in the former colony. Then The Plague descended and all four Chinese dates fell. The Japanese dates survived so itineraries where hastily redrawn. The band and crew arrived in Nagoya, Japan on 26th February 2020 from various departure points. After some rest and a day of rehearsal, they duly arrived at Blue Note Nagoya for the first gig of the by now severely truncated tour on 28th February, only to be told that this would be the one and only tour performance as the Japanese government was to close all public performance venues the following day due to the rapidly brewing Covid storm. Financial and logistical implosions notwithstanding, it was decided to record the remaining show for prosperity. After the gig, Markus Reuter and Gary Husband stayed on for a couple of days, using the time to make the fabulous improvisational document Music of Our Times, while the rest of the entourage flew to their disparately located homes.

This recording of that one night in Nagoya has an air of fraught tension brought on by the rapidly changing and increasingly worrying circumstances of the time in which it was made. This lends the album a palpable frisson, as the band storm through energised versions of their studio canon, interspersed with powerful improvisations, and of course crackling interpretations of two King Crimson tunes. The electricity generated by Larks Tongues in Aspic, Part II buzzes down a high tension line and sparks fly around your ears as it lasers into your skull. Frighteningly good!

Not that the Crim covers take away from the band originals, and the following Schattenhaft, from the rather good Prog Noir is high velocity white boy funk of a thoroughly finger-snappin’ variety, Pat’s speedy and deft rhythms being a delight. Crack in the Sky slows things down in the middle of the set for a spot of reflection, allowing the knotted muscles to relax, temporarily at least. Musical polymath Gary Husband, who, not for the first time that I am aware of, it has to be said, learned the set in a couple of days, having only played with the band in rehearsals a couple of days previously, shines on this track, and his largely textural keyboard work is a joy throughout, adding another layer to the already splendidly deep sound of the group.

The title track is a cosmic improvisation that plunges us into stellar drift, space detritus floating past, before T Lev’s sinuous bass groove drives Prog Noir into space-alien Bowie territory, his slightly tremulous croon intoning a rare vocal on the record, “its hunger for the light of day” looking for escape from “a world we call Prog Noir”. After the nine-minute atmospheric build up of Swimming In T featuring Markus’s soaring Touch Guitar we reach the set climax, Crim’s Level 5, a suitably pummelling tune with which to end.

The CD includes a quarter-hour plus bonus track, the origins of which are not clear. To my mind it sounds like the sort of thing that might have been played before the band appear on stage as an intro tape. The End of the Tour is another exploration deep into the sci-fi prog jungle, where the four-pronged musical Kosmische engine becomes as one with its surroundings.

Translating from the Japanese as “The End”, Owari is not so much a termination of this band’s mighty progress, more the end of a chapter. However long it takes for the prevailing global circumstances to abate enough to allow a semblance of normality to return, we turn the page in anticipation.