I rather like Sub89 as a venue. Whilst the public image it portrays tends to focus on its use as a thriving night club, it is nevertheless quietly acquiring a growing reputation as a notable live music venue and becoming a welcome stopping point on the tours of many new as well as already established bands. The unassuming exterior gives no indication of the expansive and open space it offers with excellent acoustics and widely accessible views of the stage.

The atmosphere is warm and welcoming as a lively and receptive audience gathers for the launch of the second Lonely Robot album, The Big Dream. For a Thursday night, the sizeable numbers are a gratifying reflection on the increasing appeal this band is beginning to exercise. Nor is it entirely unexpected given the popular success of their debut album Please Come Home, released in 2015, along with the deep and widespread respect in the prog community for front man John Mitchell.

First up are Reading based band Louder Still, who deliver a thoroughly accomplished and supremely entertaining set of pulsating, energetic and good old fashioned rock and roll. More than once I found myself drawing fondly nostalgic comparisons with Rainbow and echoes of Deep Purple. They bring an undoubtedly fresh and exuberant development to the classic hard rock sound. The enthusiasm and commitment of Craig Carlaw’s drumming is matched by the relentless intensity of George Twydell’s guitar, grounded in the driving, thrumming bass work of George Ives and lifted by the Gillan-esque vocals of Tom Rampton. Most enjoyable.

After a short break, Lonely Robot casually saunter on to the stage to a light smattering of anticipatory applause and launch straight into a feisty rendition of Airlock from Please Come Home. Immediately there is an intense sense of presence, even gravitas, and as the band continue with God vs Man and The Boy in the Radio it quickly becomes clear that a driving and determined vision is lying behind and directing the course of the music. 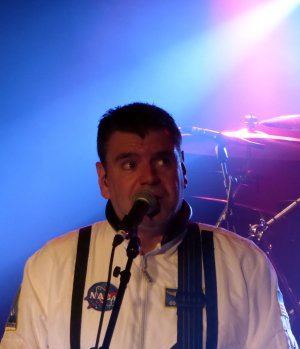 Mitchell, decked out in the spacesuit familiar from the two album covers, humorously quips they need to get the “old stuff out of the way” before they can move on to the new material. And whilst we get our first taste of the new album four songs in with In Floral Green, he quickly returns again to the first album for the bulk of the main set. It is not until the end, after an astonishing drum solo from the brilliant Craig Blundell, that we are treated to a fantastic performance of Everglow and the wonderful Sigma from The Big Dream.

Nor is this accidental. Far from getting things ‘out of the way’, one of the revelations of the evening is the sense of continuity, development and evolution that exists between the two albums. The key figure of The Astronaut acts as a core theme which is gradually being explored across different contexts and the music is an unfolding narrative of the journey being experienced. Starting the evening with an emphasis on the first album is a natural ‘setting of the scene’ for us to begin to understand what is happening in the new album.

Watching the band in full flow is an absolute pleasure and delight. Whilst Please Come Home featured a large number of guest musicians, The Big Dream sticks closely to the core members. Mitchell certainly seems a lot more settled and at ease and the music is both tighter and more creative as a result.

Steve Vantsis has a precision and insight which makes the bass penetrating and powerful. Liam Holmes brings an incisive attack to the keyboards which fills the soundscape and adds plenty of bite and depth. Mitchell, as always, is phenomenal and it is hard to name another guitarist who possesses his timing, mastery and sublime touch. Craig Blundell continues to shine quite spectacularly, an effortless whirling dervish of supreme intensity disguising a steely discipline and tight control. We are also treated to a guest appearance from Kim Seviour who brings a lovely balance and harmony against Mitchell’s gritty vocals.

The net effect is a band who are now growing together, gaining in confidence as they interplay with each other’s skills and producing music which is compelling, direct and, at times, simply mesmerising. They leave the stage to thunderous applause, a chorus of whistles and the appreciation of a breathless audience who have experienced and enjoyed the very highest levels of musical creativity and musicianship. A great evening and a wonderful way to launch the new album.

[You can read Kevan Furbank’s review of The Big Dream for TPA HERE.]