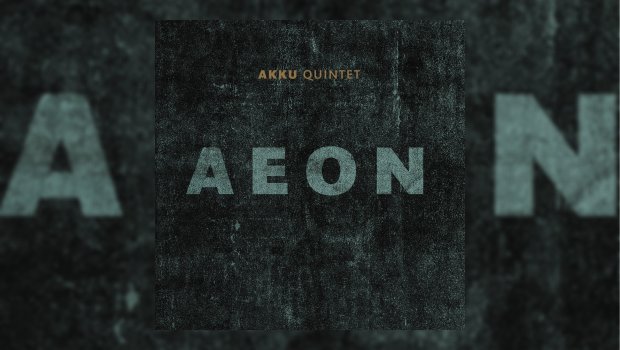 Another band following in the currently popular minimalist jazz fusion tradition, the Swiss group AKKU Quintet make music that is at one and the same time glacial and precise, yet human and emotional. The plaintive conversation between piano and guitar on Aeon Part I highlights this in addition to setting the scene for the track Aeon. Nominally split into three parts, but played as one piece of music, this beautifully constructed piece weaves its magic, the intertwined sax, guitar and piano crystalline in perfection. The gentle insistence of the piece builds in waves, and in Part III the tension, kept just below the surface propels the piece to its conclusion and the safe hearth of home. All of this is underpinned by the metronomic precision of the rhythm section, the whole thing arriving at a predestined point with an almost clichéd unhurried Swiss precision.

Unusually the drummer is the sole composer here, and Manuel Pasquinelli has continued his spacious groove from the previous album Molecules with style and grace. Polar witnesses more of guitarist Markus Ischer’s Eno/Fripp-esque sky-saw guitar as the piece unfolds in layers of icy calm, twinkling in the low but strong sunlight offered by Maja Nydegger cyclical piano figure that eventually breaks down to start again, rejoined by the ice-sheet guitar. This is a lovely piece of music, regardless of what convenient pigeonhole it may get put in.

Flying Low increases the tempo and uses repetition well to somewhat ironically create a hypnotically climbing piece, with clever and sparing use of electronic effects on the guitar and piano making for a fraught atmosphere as it zooms past your ears under the high tension lines. Markus Ischer is an impressionistic player in the European style, and his soundscapes – you can’t really call them solos – are enthralling.

The lengthy Satellite repeats the lesson that the space between the notes when used well is just as relevant as the notes themselves, the tune unfolding in its meditative stately fashion, subtly changing time signatures as it goes. We end with Waves and the longest is saved until last. The clue is in the title, as the piece, borne on Andi Schnellmann’s repeated high register bass figure, initially ebbs and flows with Maja’s piano. These waves are of the gentle, lapping variety, there is no storm here on this inland lake of contemplative vastness. The other lead instruments all get their turn in the groove, locking into the disciplined rhythmic structure, only to fall away again, and so it goes, and so it goes…

This is a triumph of composition and arrangement with which to end a fine album, and one that will bear repeated playing chez moi.

Much like Molecules, AKKU Quintet will not be rushed on Aeon and use the time well to reveal subtleties in musical patterns by way of precision playing. With Nik Bartsch and Sonar (of whom Manuel Pasquinelli is also a member) in their locality they are in very good company, and if you are partial to that kind of minimalistic compositional trait, then AKKU Quintet with its slightly fuller sonic palette will certainly get your cuckoo bouncing on its spring.