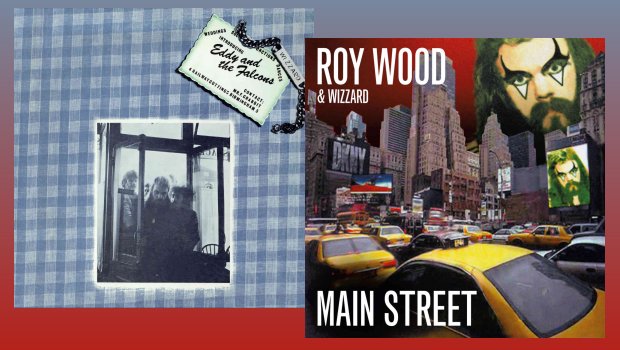 Wizzard – Introducing Eddie and the Falcons

Roy Wood had a curious attitude to fame in the 1970s, or so it seemed. The founder member of one of the ’60s best singles bands, with a thrillingly dangerous live act to boot, The Move got ever more eclectic as the decade went by, but they always knew how to bang out a tune. Witness their last and best album in my never ’umble opinion, Message From the Country. Although there were no major hits on it, it is crammed with imaginative melodies. By the time of the Electric Light Orchestra, Wood’s influence on the first album only became apparent after he left soon after its release, and Jeff Lynne turned ELO into an increasingly monotonous hit machine.

In the 1970s, Roy had a handy self-destruct button to hand each time prolonged fame beckoned. Unlike Kevin Ayers, whose fame avoidance was a combination of reticence and, well, laziness, Roy did at least venture out into the spotlight with every band he was in. Wood was the first to wear glitter on Top of the Pops with The Move, and with his penchant for muddy, stomping productions, was at least as responsible for birthing glam rock as the more quoted Bowie or Bolan.

What stopped Roy from becoming an international megastar was that he is too talented for his own good, resulting in a schizophrenic output, as mentioned in the sleeve notes, and it is hard to disagree. In between guiding his many-headed jazz-glam-rock beast Wizzard through three consecutive big hits in 1973, See My Baby Jive, Angel Fingers, and of course, the unavoidable I Wish It Could Be Christmas Every Day, came the band’s debut album which confounded their young teen fanbase, me included, with its lengthy jazz-glam freakout on side one, and a stodgy brass band neo-cassical affair on side two, and none of the singles were included. Sladest it was not. The whole thing is like a bad trip in a rainy Midlands’ town, compounded by an awful sub-Spectoresque production from Wood rendering it largely impenetrable. If ever an album needed a remix, it’s this one. That debut album killed the band’s commercial momentum as a lot of fans were still in school and couldn’t afford full price LPs, and so found it under their 1973 Xmas trees, right at the height of Wizzard’s commercial rise, which it killed stone dead!

Maybe Roy Wood realised that Wizzard Brew went too far, as 1974’s Introducing Eddie and the Falcons reverts to shorter tunes and pays homage to Roy’s formative years as a teen rock ’n’ roller, right down to the revamped teddy boy image the band adopted for the album. Nods are given in the direction of all the rock ’n’ roll icons, but the album is far more than a mere pastiche. You Got Me Runnin’ is indeed a missed opportunity for a hit single, as the liner notes say. A classic doo-wop tune with appropriate girl chorus, this would have shown the likes of Showaddywaddy how it’s done, back in 1974.

Elvis gets a going over on the supremely daft but fun I Dun Lotsa Cryin’ Over You, although Sam Philips would have put his foot down on the way too sophisticated middle eight instrumental break, and the deconstructed ending! This is the Story of My Love is the Spector bit – he can’t leave it alone! – and although the sound on Eddie… is an improvement on Wizzard Brew, it could hardly be anything else, let’s face it, it is still rather thin and reedy, with the lower frequencies largely absent, and Roy’s fine and highly versatile voice is often buried in the mix.

Roy had originally intended the album to be a double set, with the second LP being a full blown jazz-classical offering. The record label, wisely one has to say, got fed up waiting for the second LP and released Eddie… as a stand-alone. Included with the album was a poster of Roy in full glam regalia from a year earlier. The poster is reproduced in A4 size with this CD issue. The contrast between “Glam Roy” and the “Teddy Boy Roy” of Eddie… is indicative of Roy Wood’s creative maelstrom at the time. In between the psych-jazz rock of the first Wizzard album, the chart hits, and the rock ’n’ roll set reviewed here, Roy found time to release his first solo set Boulders, a rather fine set of songs, differing in style greatly from the already scattergun Wizzard sound. It sounds like he needed a stronger manager than he had, to keep him focussed on one direction at a time!

The five bonus tracks are from the contemporaneous singles, and the whole package is well put together, as you’d expect from Esoteric Recordings. Despite my misgivings about the production, it is an enjoyable listen, and has awakened my teen memories of Wizzard, not least that they were the first band I saw, in February 1974 in Kettering Granada cinema. My mate’s mum had pre-arranged a pick up time, which of course was waay too early, so we probably only saw half the show.

By the end of 1975, Wizzard had effectively split up as a working live band, or more truthfully, the expense of running a many-headed musical beast like this became too much, the individual members having drifted away to more financially secure tenures. Songs recorded in 1976 for what was going to be called Wizzo were never released at the time, hence the subsequent billing of “Roy Wood & Wizzard”. These musical vignettes were eventually let out of Roy’s musical asylum in 2000, minus the track Human Canonball, which Roy thought was sub-standard. The tune is included here as a bonus track, so you can make up your own mind on that one.

I’d not heard this album before now, so I was quite looking forward to scribbling about it, having long appreciated Roy Wood’s many musical talents. The opening song is the title track, a sophisticated piece of Beatles-influenced tuneage with a multi-instrument break at the end. The sleeve notes refer to this album as “jazz rock”, but just because a lot of the instrumental breaks are from reed and/or brass instruments, it doesn’t mean it’s jazz, and this album definitely ain’t! Main Street the track is closer to 10CC than it is to jazz rock.

Elsewhere, we have vaudeville, exquisitely orchestrated balladry, deftly arranged big band rock ’n’ roll, and a feeling that, similar to the Beatles at their peak, Roy is drawing on an English heritage going back to music hall, and mixing it with ’50s and ’60s influences from across the pond. The end result is a musical fairground of delights. The arrangement of Don’t You Feel Better would make Brian Wilson stand up and applaud!

On the appropriately named The Fire in His Guitar, Roy even gets to indulge in a psychedelically tinged guitar freakout. This all goes way beyond classification and certainly is not “jazz rock” as the liner notes have it! I consider the appropriate word to apply to this album is “sophisticated”, and of the three albums with Wizzard in the credits, Main Street is by far the most fully realised, both musically, and in terms of production. Roy’s mastery of the mixing desk has finally caught up with his many other talents, with the result that this album is the best sounding album under the Wizzard name by a country mile, and therefore the most consummate realisation of Roy’s gifts since The Move’s swansong Message From the Country.

Who knows where Wizzard might have ended up if Roy had been a tad less restless, creatively speaking?! If you only buy one Wizzard album, buy this one.