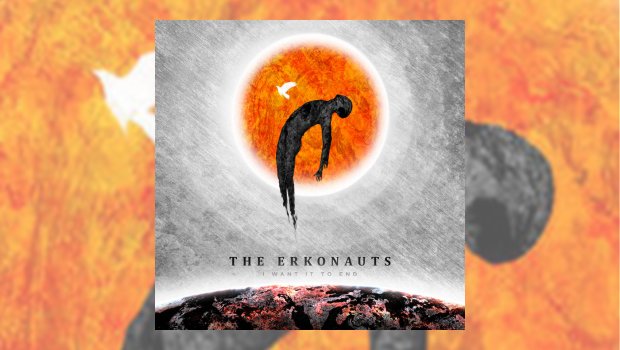 The Erkonauts – I Want It To End

I was introduced to Swiss band The Erkonauts in 2017, when their second album I Shall Forgive was recommended to me. Despite my initial confusion as to what the hell I was listening to, I was already in love. That album ended up one of my favourite releases of 2017 (I think I might have declared it top three, but I know it was definitely in my top five). Upon first listening, I decided that the closest I could come to describing the sound of the band is Reverend Horton Heat (who I like) meeting Motörhead (whom I don’t) in a head-on collision, with added progressive funk flair. There have been various bands who have flirted with blurring the prog/punk borders over the years (not least, the rather marvellous Peter Hammill and Tim Smith), but I Shall Forgive screamed out to me that it was one of the most successful mergers that I’ve heard.

I know this was my description back then, thanks to the search function on Facebook. I went on that The Erkonauts sound like traditional rock and roll/rockabilly crossed with punk, crossed again with metal, and put in a prog blender. It’s an intense and chaotic concoction that sounds like it shouldn’t work, but it does. Even though I prophesied (wrongly, it turned out) that it was not an album likely to make much of an impression in my list of favourite 2017 releases, I made the note that this wasn’t a band to write off on first listen. “[The Erkonauts] are certainly the type of band whom it would be easy to do so, but continued listening reveals just how good this album really is! Admittedly, I did like the album on first listen, but I seem to enjoy it more every time I listen to it. I need to buy their debut now…”. And I did. And it was great too. And now, in 2020, comes the third album, I Want It To End.

The album probably couldn’t be titled better, as who hasn’t wished 2020 could end? Not, unfortunately, that 2021 holds any promise to be much better. The Bandcamp page states that “stands for a need to change”. I’m not sure many can argue with that. What hasn’t changed, however is the intense pummelling barrage of The Erkonauts’ delivery, and there’s no easing yourself into the album, as the opening number (and lead single) pounds straight in with a crashing drumroll, some slapping bass, and a fast and furious verse, before the relative calm of the chorus. Though with rolls of cascading drums at insane speeds, and the absolutely phenomenal bass, I must emphasise that the calm is only relative. War Flamingoes is somewhat reminiscent of System of a Down, but only if sped up beyond Alvin and the Chipmunks speed, and racing Lemmy down the highway to hell.

The pace slows with second song, The Future Ends With You, but again this is merely relative. Imagine a bouncy and punky Gojira, and….no, you still won’t come close. There’s nothing else on this planet that sounds like The Erkonauts, and thank goodness for that. I’ve not read any reviews for the new album (yet), but at the time of the last – apart from the obvious Motörhead comparisons – the bands given as points of reference were Faith No More, Gojira, Korn, The Offspring, Primus, Red Hot Chili Peppers, SikTh, System of a Down and Tool, among others. I can’t say I agree with too many of them, too much of the time, but that gives some indication of the originality of the band. Their sound is hard to pin down, but instantly recognisable. Without wishing to detract from the other musicians in the band (and I’ve already mentioned how awesome the drumming of Vinch Cerutti is), this sound is largely down to one man: Ales Campanelli, on bass and vocals. Ales’ funky bass grooves drive the band, and his vocals accelerate over the top. And, to be fair, over the top isn’t a bad description of The Erkonauts. But not in a jump the shark sort of fashion. If you’re going to jump this shark, you’re gonna need a bigger boat.

Much of the album should be tiring, as frantic and frenetic rhythms slam aggressively and inexhaustibly against the eardrums, and yet the aural assault is undeniably satisfying and enjoyable. There’s something about the raw and tortured catharsis being screamed at us that feels healing. It’s scream it out therapy, and it’s beautiful in its ugliness. The album feels so personal and sincere, it’s hard not to be caught up in the emotions. If you’re feeling down, by the end of this album, you’ll be feeling rejuvenated. The music is mayhem, and the mayhem is medicine. It’s perhaps not a comfortable album to listen to, but it’s somehow comforting. Therapeutic in its creation, and therapeutic in its consumption.

Second single Five Orange Seeds offers a very different vibe to War Flamingoes, almost gentle and peaceful in the verses, and possibly the most melodic moments of the album. It’s quite beautiful, and gives the harder and more violent chorus that much more impact. The bridge that combines the melody from the verses with the harsh vocals of the chorus is awesome, before it falls away to just that melodic riff. The dynamics of this song are so good. I imagine, since the sound is similar to their previous albums, that people might talk about the “no frills” production, but I think that can give the wrong impression, as the band clearly considers exactly how something will sound, and the way to effect the greatest impact of those sounds. The songs are obviously so very carefully crafted, and the varying moods and textures of Five Orange Seeds offer a perfect example of this.

It Could Be Over Soon breaks the pace with a slow Spaghetti Western dirge, that shows that Ales is as comfortable playing it slow as he is with the slap-bass technical craziness of tracks like War Flamingoes. I love this song, and it’s placed perfectly. Not only are the songs carefully crafted, but the sequencing has also clearly been given a lot of thought. After another two funky and thrashy delights, there is a second reprieve in the form of Caravaggio. And if It Could Be Over Soon showed that The Erkonauts could be brooding as well as they could be bruising, then Caravaggio shows just how well they can do brooding. It’s a surprising highlight of the album, in all its mellow and gentle groove. I love how ominous it feels, and it’s almost like watching a horror film and waiting for the jump scare. There’s no such thing, of course, but a change does come and when it does, it’s magnificent. The final couple of minutes of the song are simply wonderful. I’d never have expected a song like this to be a highlight of an Erkonauts album, but there’s no doubting that it is.

The album then ends with a crash and burn The Curse of Scotland, and it’s a rousing finale. It’s the shortest track on the album, but it says all it has to say, and it’s as fitting a closing number as War Flamingoes is the opening number. The Curse of Scotland, and the album as a whole, are breathtakingly succinct. A lesser band might have made Caravaggio the closing number, but The Erkonauts is not that band. This is a perfect ending to a perfect album for an imperfect time.