The discovery years for this reviewer were in the early ’70s, when I spent each and every Saturday morning leafing through endless album covers, with the eager anticipation of uncovering that week’s musical gem. A risky selection process at that time methinks, as the vast majority of album covers were deceptively alluring. With limited resources (pocket money) and armed with the certain knowledge that each record shop visited would only allow you to enter the sacred booth to listen to one track, invariably the album opener, being wary was always the key. 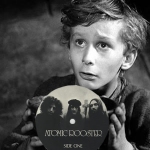 Time for a hasty retreat…

The above preamble will, I’m sure, have resonated with those of a certain age and in a roundabout way brings us to Atomic Rooster. Piqued by the two chart singles, Tomorrow Night and Devil’s Answer, the aforementioned band were on my watch list and with a quirky album cover and great opening track, one Saturday morning I left the record store with In Hearing Of, the band’s third album and my introduction. As an avid ELP fan, the fact that Carl Palmer was in the band was an added bonus! Record playing, and examining the cover in more detail revealed that he’s not on the album – what happened there? No Wikipedia or Internet then folks, although the fact that by this time I already had the first two ELP albums and seen them live twice should have been a giveaway…! Nearly five decades later such information is widespread, so I’ll spare you the well documented and rather convoluted revolving door line-up changes and concentrate this review to Esoteric’s 4CD boxset, which brings together all the band’s 1970s recordings.

Continuing Esoteric’s re-mastered reissues, this collection is presented in an attractive clamshell box with four of the five album covers represented on the four CDs – the only omission being the denim clad Made In England. The inclusion of a healthy helping of bonus material does mean however that In Hearing Of is split across discs 3 and 4. The set also includes a sixteen page illustrated booklet, comprehensive liner notes from Malcolm Dome and exclusive and insightful interviews with Nick Graham, Pete French, Steve Bolton and Chris Farlowe.

The aforementioned In Hearing Of remained my one and only Atomic Rooster album until much later when the introduction of CDs offered an opportunity to delve into the back catalogue. Album number two, for me, was the band’s fourth release Made In England which somehow didn’t catch the magic, although recognisable as Atomic Rooster, there was now a bluesier, more R’n’B slant to the music. So with all the other music being released at this time, I never felt compelled to purchase the band’s first two releases. This four disc box set from Esoteric Recordings offers the chance to put this right.

Listening to the band’s eponymous debut, their signature sound is evident from track one and despite numerous line-up changes Atomic Rooster managed to retain that instantly recognisable sound, certainly on the first three albums – although to a lesser extent on the last two ’70s releases. With Vincent Crane as the principle songwriter and the only common denominator we must attribute a great deal of this to him.

The debut album kicks off with a heady mix of riff based hard rock – Hammond organ, driving drums and topped off, on this occasion, with Nick Graham on vocals. Notable tracks here are the band’s interpretation of John Mayall’s blues classic Broken Wings, the fantastic rock-out Decline & Fall, featuring a ‘brief’ Carl Palmer drum solo, and finally, the standout track for me, the rather splendid Winter. A simple song with a delightful melody, haunting flute, courtesy of Nick Graham, and then a wonderfully jazzy workout in the middle.

Shortly after this release guitarist John Du Cann joined the band and Nick Graham departed, which was a real shame. Subsequently three of the album’s tracks were overdubbed for the planned U.S. release and this constitutes the first three bonus tracks here. The other bonus material is a demo version of VUG, which would appear on the band’s sophomore release, and a slower tempo demo version of Devil’s Answer.

Released in the same year as the debut, Death Walks Behind You sees the band push the progressive envelope further, unperturbed by the loss of two thirds of the original line-up, and with John Du Cann and initially Ric Parnell found a more invigorated, harder edged band striking out. With the mini epic Gershatzer (featuring another drum solo, this time by Paul Hammond), Death Walks Behind You is regarded by many as a classic of the progressive rock genre. The band’s second single, Tomorrow Night, gave the band their first hit and also saw the album chart in the U.K.. Certainly Atomic Rooster had hit their stride here and along with Tomorrow Night, the lively VUG, Sleeping For Years and the aforementioned Gershatzer, Death Walks Behind You was a great follow-up release.

Bonus material on Disc 2 is Play The Game, the B-side from the Tomorrow Night single, and non-album track Devil’s Answer – their highest chart success.

Riding high on the success of Devil’s Answer the band’s third album was released in the summer of 1971. As with each album the customary line-up changes ensued. With Vincent Crane inviting Peter French in as vocalist, John Du Cann and Paul Hammond were soon invited to leave. Strangely the album’s inner sleeve shows Atomic Rooster as a quartet, although the four never played together. Despite this In Hearing Of remains a very strong and cohesive album and contains some of the band’s most memorable material.

NB: Slightly later version of the band with Ric Parnell on kit.

Bonus material on Disc 3 is limited to the re-recorded version of Devil’s Answer, with Pete French taking over the main vocal.

As we move on to album number four we return to that revolving door once more, Pete French moving to Atlantic Records and joining Cactus, whilst his replacement in Atomic Rooster is former Colosseum vocalist Chris Farlowe. As mentioned earlier there’s a distinct shift in musical direction on Made In England to a more soulful, bluesy, even funky style.

Made In England is an album that has not grown on me, granted there’s vestiges of the early Rooster, but those moments are fleeting. Don’t get me wrong, there’s some fine playing on the album and it’s a great line-up, but I always struggled with the “new sound” and certainly with Mr Farlowe. His vocal delivery suited Colosseum, but not so with Atomic Rooster. Saving graces, for me, are Breathless, which features some of Vincent Crane’s finest piano playing, and the rocky All In Satan’s Name.

Things don’t improve greatly for the band’s final ’70s release, Nice ‘n’ Greasy, which as the title implies heads deeper into bluesier territory, and to be truthful the early Atomic Rooster sound has all but gone. Are there any redeeming tracks? Well the latter part of the album comes to the rescue with the nicely orchestrated Can’t Find A Reason, a powerful ballad, immediately followed by the jamming instrumental that is Ear In The Snow. The closing track, Satan’s Wheel, certainly shares its DNA with the earlier output, but only the Devil has the answer…

Bonus material includes sides A and B of the band’s last two singles with the pleasant piano/keyboard Moods being the only track of note for me.

Atomic Rooster were a band who didn’t quite go on to the dizzy heights of their contemporaries. Whether or not this was due to their keyboard dominant sound, which never quite fitted into the “progressive” niche, or their riff based signature sound which wasn’t quite heavy rock, we can only conjecture. I’m sure there are many opposing views on this subject. What isn’t up for debate is that both Esoteric Recordings and Cherry Red Records have come up trumps once again with this splendid deluxe reissue.

And the legacy continues with Steve Bolton and Pete French, along with Adrian Gautrey, Bo Walsh and Shug Millidge, reforming Atomic Rooster in 2016 and currently performing classic material from the band, reminding us of the fine legacy of music that came from Vincent Crane & Co.

**With the rather convoluted, revolving door nature of the band, along with the extensive inclusion of bonus material, the musicians listing is for guidance only.