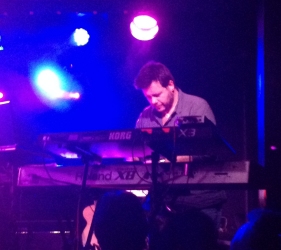 Pink Floyd style guitar work and Uriah Heep-esque keyboards are just a touch of what describes Mostly Autumn’s first half performances this Friday night. The material played pre-interval plays like a dream compilation, covering a mixture of early Mostly Autumn staples Nowhere To Hide and a keyboard-laden Never The Rainbow spotlighting Iain Jennings’ masterful skill on his Korg X3 and Roland X8.

Ex-member Heather Findlay classics follow, Evergreen sees Olivia Sparnenn and Bryan Josh take centre stage aptly crowned in green light to perform exquisite harmonies, then we get around to arguably one of the best songs of the night. Questioning Eyes – famous from Jennings and Sparnenn’s Below The Radar concludes from its humble and delicately vocalised beginnings into a monster guitar, keyboard and drum frenzy, each building on the other, encouraging a responsive foot tapping from the audience and culminating in Alex Cromarty’s passionate stick banging.

For the average fan this is already an incredible evening ticking a number of boxes of what you want from a live show, so when Bryan Josh says that the second half encompasses the brand new concept album in its entirety you realise you are in for a treat. Sure enough the album is played in its full form with no breaks. Beginning with very sinister sounding keyboards from Jennings and dimmed stage lights, the scene is set for anyone watching that a musical story is about to unfold. Unusually riff laden than previous releases but not without its softer and intricate moments, the album in this live setting is a real privilege to witness, especially as playing an album live from start to finish is not something that many present day acts carry out, lest they be an older band on an anniversary tour or festival.

Instead of the usual boring encore rituals that most acts fall victim to, Mostly Autumn did actually stay off stage for a good 5 minutes which had some fans actually wondering if they would reappear at all. The gig-goers did not go quiet by any means and were rewarded by the emergence of a band clad in tinsel and Father Christmas hats. Josh announced it was time for some “fun” and “less serious stuff.”

The never-played-live-before version of the Disney song Let It Go actually suited Sparnenn’s vocals ridiculously well and had many fans in awe. The loudest crowd participation followed as the chorus of Chris de Burgh’s A Spaceman Came Travelling was surely heard outside of Manchester. Concluding with a return to their Prog rock roots, Greg Lake’s classic I Believe In Father Christmas ended the night to a highly receptive audience.

Looking back, this was a superbly executed musical experience with each band member having their moment to take centre stage. 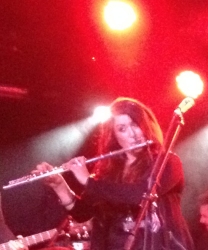 A last but not least mention goes to Anne-Marie Helder of Panic Room who provided some excellent flute-work throughout the night.