The unique venue of the Thekla on Bristol Quayside was filled for fine sets by these two very talented bands. The seemingly ubiquitous John Mitchell, also of Frost*, It Bites and Arena, brought his latest creation to Bristol to perform a particularly entertaining brand of rock, blending some expansive soundscapes with engaging and accessible songs, but the evening began with the outstanding TILT.

TILT have a curious history; originating a few years ago from Fish’s touring band, they released a promising but not widely heard EP called Million Dollar Wound in 2009, featuring a variety of different singers… and then nothing was heard until 2016 when they re-emerged with a changed line-up and released the impressive full debut album Hinterland to critical acclaim.

They took to the stage in Bristol and gradually intrigued the crowd, many of whom were unfamiliar with the material, with the atmospheric album opener Assembly. However, it was probably the impact of the rocking Hinterland, featuring some great guitar from Paul Humphries, which won over many in the crowd. It’s a hell of a song! 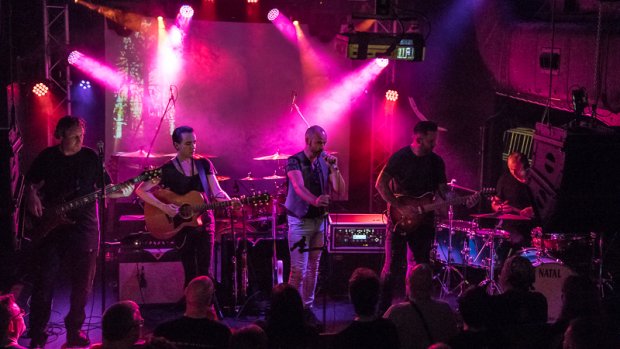 PJ Dourley’s vocals really shone on the emotional Against the Rain, which flowed into an impressive No Superman, a fine song which has understandably been reborn from Million Dollar Wound. The touching use of backdrop images of the recently deceased Chris Cornell from Soundgarden gave this song added resonance. It is clear that whilst this may be a relatively new band they are a class outfit of fine performers who have honed their skills with other acts. What is particularly noticeable is the perfect sound balance, allowing the interplay between the guitars to be clearly heard. New band member, Rich Watson, skilfully and charismatically adds his own acoustic and electric guitar elements to the mix. However, what isn’t noticeable are any keyboards on stage, but this does not seem to impair their sound at all. Drummer Dave Stewart, somewhat crammed to the side of a packed stage, skilfully triggers keyboard sounds and loops from a pad, as well as powerfully pounding the drums. PJ Dourley later explained that the absence of keyboards was simply a logistical issue due to the stage, and that usually he handles the keyboard parts on stage. TILT’s album is clearly guitar oriented so this is not a big issue at all and they play with skill and passion. The epic sounding Bloodline is a spectacular climax to the set, showcasing the whole band, particularly the thunderous bass lines of TILT’s main song writer, Steve Vantsis. As they turn to the atmospheric set closer Disassembly one has to wonder whether next time they should be headlining, such is the quality of their songs and performance. 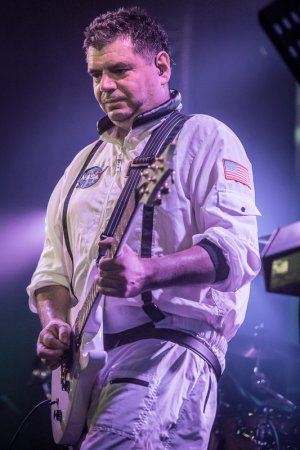 The news earlier that day had been that Lonely Robot main man, John Mitchell, had a persistent wrist injury, diagnosed in hospital that day as a broken wrist… so would he play?

Well, the show must go on, and Mitchell strode confidently onto the stage in his now trademark ‘Lonely Robot’ white NASA suit and played a great set, with no indication whatsoever that he was suffering from such an injury. The space theme is summed up immediately with the immense sounding instrumental Airlock which morphs dramatically into the throbbing rock of God Vs Man. It is clear immediately that Mitchell has surrounded himself with a talented band with Liam Holmes filling the venue with finely judged keyboards. Steve Vantsis, introduced as ‘no stranger to marine life’, is putting in his second shift of the evening on bass, and deftly deals with the contrast between driving rock and more subtle passages.

Boy in the Radio finishes the opening trio of songs from debut album Please Come Home, with Mitchell reminding us that Pete Cox of Go West sang the song on the album. Nevertheless, Mitchell handles the vocals superbly as he does all night, switching from powerful rock to more ‘pop’ oriented songs and to softer, more emotive pieces with great acumen, as shown on the first new song of the evening, In Floral Green, which is played wonderfully. As it turns out this is one of only three songs taken from the latest album The Big Dream played in Bristol, which is really the only slight disappointment of a fine evening, a minor quibble for such an excellent set.

Lonely Robot is one of the most outstanding songs from Please Come Home and is a highlight tonight, reinforcing the theme of the albums. Mitchell’s self deprecating humour is evident all evening and he ironically introduces the ‘prog’ of The Big Dream as ‘very long, unlike the queue for the ladies at a prog gig’ (although to be fair there is good representation from female fans this evening!). Craig Blundell on drums, who also plays for Steven Wilson and Frost*, gives this epic number an enormous intro before Mitchell and band launch us into a stratospheric soundscape as a centrepiece for the show. Maybe as an antidote to such expansiveness this is followed by Construct / Obstruct, a song which Mitchell likens to The Police, and hearing it live I can hear what he means, but Mitchell says he hasn’t heard from Sting’s lawyers yet! 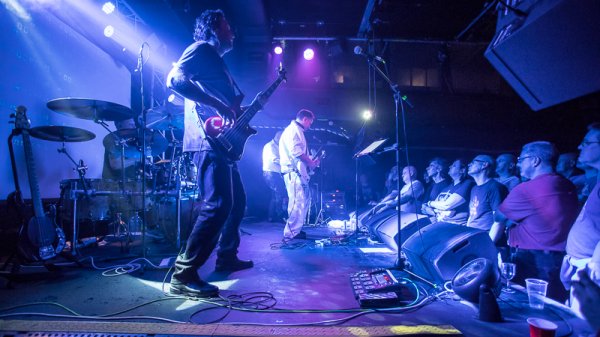 A thunderous Are We Copies? leads us on to a much more restrained and emotional finale to the main set. The contrasts in light and shade characterise the strength of the show as Mitchell and band skilfully convey both power and pathos with equal aplomb and feeling. Mitchell playfully reminds Holmes that Marillion’s Steve Hogarth played keyboards on the album version of Humans Being… so ‘no pressure’, and Mitchell sings it beautifully. He simply introduces set closer Red Balloon as ‘A song about adoption’ and Holmes plays lovely piano to support Mitchell’s touching and plaintive vocals. It’s an emotional and subtle way to finish a remarkable set. 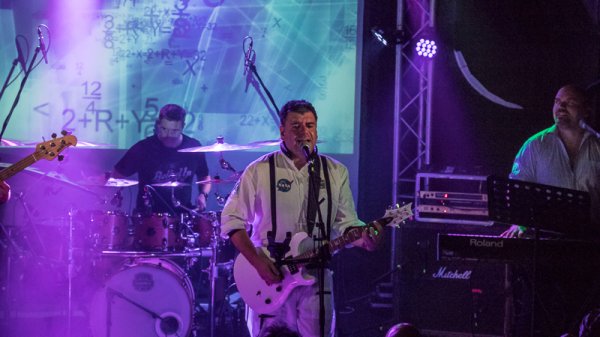 Craig Blundell returns alone for the start of the encore and mesmerises the crowd with a spectacular and varied drum solo, including synth loops, before the band return for a rousing version of Sigma from the latest album to finish off the evening with the crowd singing along joyfully.

A gig on a boat… with a bloke dressed as an astronaut… with a broken wrist?

It could have sunk into a Titanic evening, but it’s a rousing success, both bands deserving more recognition and even bigger crowds next time they tour.

If these two excellent acts don’t float your boat then we’re all sunk.

[All photos by Mike Evans and used with his kind permission.]