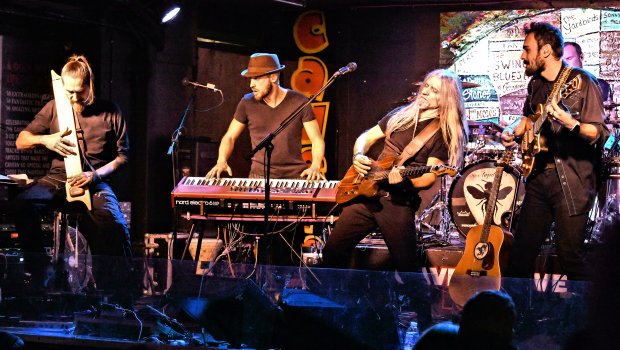 Nineteen months ago, a van carrying a band of musicians and their instruments was heading north from Southampton to Liverpool when they received an urgent message. Due to the continuing rapid spread of Covid, they were told France’s border would be closing soon, giving them less than 24 hours to get back home across the English Channel.

This was a devastating blow for the band in question. They’re all huge Beatles fans and playing the Cavern Club would have been a dream come true, the clue being that their recording studio in France is called L’Abeille Rôde.

But finally for Lazuli, the dream is realised.

2020’s aborted tour, which included numerous European as well as British dates, was intended to showcase their then new album, Le Fantastique Envol de Dieter Böhm (The Fantastic Flight of Dieter Böhm), which was inspired by their fans, one in particular. Sadly, only fortunate fans in Chepstow and Southampton got to enjoy the live version of the album.

Now, the delayed fantastic flight lands in the subterranean lounge of the Cavern Club, a smaller airy performance area with a compact stage, squashy seats and a suitably intimate atmosphere, a guard of honour provided outside by nearby statues of John Lennon and Cilla Black (your humble reviewer having had some fun explaining to two of the band members who she was).

Such are the confines of the stage, there’s no room for the vivid graphics backdrop Lazuli have created to illustrate the songs. But being surrounded by Beatles’ memorabilia and a backdrop with names of some the bands who have previously played there feels totally appropriate in the circumstances.

Their flamboyant, dreadlocked guitarist Ged Byar bade “au revoir” to the band in 2020, so multi-instrumentalist Romain Thorel introduced them to his friend and musical companion, the ever-cheerful Arnaud Beyney. Given the occasion, this was to be a particularly significant night for him. 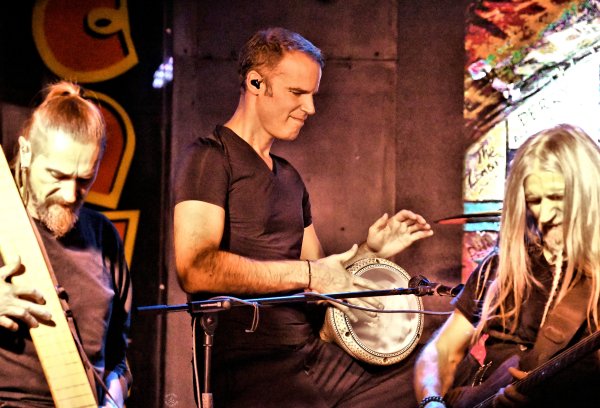 It’s a visibly emotional Dominique (Domi) Leonetti who steps up to the microphone to introduce the show in his halting English. He explains that L’Envol, which they are about to play in almost its entirety, is all about them as musicians planting a note on an island shore, which grows into a melody and then a song which they send out across the sea like a message in a bottle, hoping it will be picked up and heard on another shore.

Rest assured, we are all ready to receive their notes, melodies, and songs tonight.

The heavy, almost tribal, groove of opener Sol builds into a wash of delicious sound with distinctive Beatles overtones, Beyney unleashing the first of his many soulful guitar solos.

A haunting waltz-like rhythm and Thorel’s flowing piano arpeggios are among the highlights of Les Chansons Sont Des Bouteilles A La Mer, elevated further by Claude Leonetti’s growling Léode (the sonic, programmable box of tricks resembling a Chapman Stick that Claude created after losing the use of his left arm in a motorcycle accident). The Léode roars like a leviathan from the deep at the start of Mers Lachrymale, Domi’s intense melancholic singing underpinned by Beyney’s guitar and Thorel’s piano.

Thorel then switches to the French horn, coming to the front of the stage for Dieter Böhm.

A gently strummed guitar introduction to Un Visage Lunaire escalates into a swell of sound, again with a huge Beatles I Am The Walrus vibe. It’s on this song you really appreciate the solidity and creativity of Barnavol’s drumming as he anchors the elements of the song, while the Léode and guitars take off on more flights of brilliance.

L’Envol has a dreamier, more psychedelic quality to it, Thorel producing choppy keyboards as the instrumental lifts off into the ethers while L’Homme Volant (The Flying Man) delivers a much more laid-back lyrical feel.

Dans Les Mains de Dieter concludes with the most fluently expressive, soulful guitar solo from Beyney, his eyes half closed in concentration and communion, which is how the album ends, as the listener – and player – become one with the music.

This is not the end of the show, Domi reassures us, and the first of their “old” songs, Déraille, is about cows. Claude takes it by the horns, his Léode intro sounding like whale song rather than bovine bellowing before he runs his fingers down the fretboard and launches it into a colossal explosion of sound.

Up next is perhaps their most well-known song, Le Miroir Aux Alouettes, during which Beyney plays that rarest of Lazuli instruments, a bass guitar, to let Thorel concentrate on his lightning swift keyboard runs while Barnavol returns to marimba.

Thorel, the consummate music dude in his black fedora hat, deftly moves from keyboards to drum kit in time for the song’s magnificent rhythm shift. As he hits the first beat, Barnavol swaps marimba for derbuka, the band rocks those gorgeous Middle Eastern melody motifs, Domi playing lead guitar while dancing around – as are some of the audience! 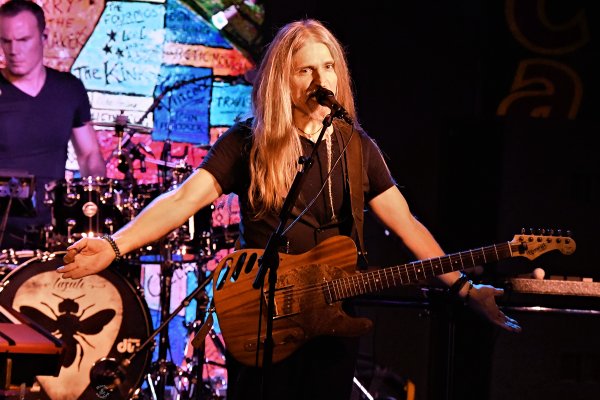 The undiluted joy this band generates is forever captured in this song, the pleasure they feel when they play together, smiling and sharing that extraordinary chemistry and closeness, making them the most exciting and enchanting live band around, not that I’m biased!

Les Sutures is a darker, more sombre song, Thorel taking the spotlight again on his brooding French horn, Barnavol upping the tempo with his precise drum rolls, giving time for Domi to bring out a snare drum on which he and Thorel duet.

At this point, we are treated to a song from the new album which was due out next month (November) but, because of issues with raw materials, will now be released in five months time (next March), Domi explains. Egoïme (Selfishness) is a jangling almost George Harrison-like song, Domi on 12-string guitar, Thorel sustaining notes on French horn and Claude weaving some Léode magic.

Domi’s been a lively, energetic presence all evening, but on Homo Sapiens, he’s in full stomp mode, long hair flying, his voice soaring ever higher.

During their set, club goers have been wandering in from the club’s main performance area. Several ask yours truly who this band is because they are incredible. That’s certainly a bonus for the band and the merch desk tonight.

The friendly banter continues onstage, including a joke about a sausage. Domi’s English has certainly improved since their last visit. He opines that it’s his wife’s birthday today and she is home alone, while Arnaud is celebrating the fifth anniversary of being a couple with his girlfriend, who is in the audience tonight.

Domi also mentions the spiralling cost of energy and thanks the audience for providing them with free heating!

He talks about how he discovered the Beatles when he was 10 when he heard A Day in the Life on his cassette player, and this is the reason tonight is so incredibly special to him, made possible by their tour manager, Nellie Pitts.

Talking of tour managers, in the audience tonight is Yatta, Fish’s production manager, who has also managed Lazuli’s tours in the past. They dedicate Les Courants Ascendants to him, the epic song which combines all the best elements of Lazuli music – French horn, soaring Léode and majestic guitars – that scale more exhilarating heights, Domi jumping around the stage in a state of ecstasy.

As the song ends, voices in the audience start singing back the main melody line which is encouraged by Domi. Their voices rise, just Thorel and Barnavol staying on stage to continue the melody and rhythm in an improvisation, embracing jazz, funk, soul and classical influences. It’s breath-taking, entertaining stuff which stuns everyone with their telepathic musical virtuosity based on years of friendship and playing together. 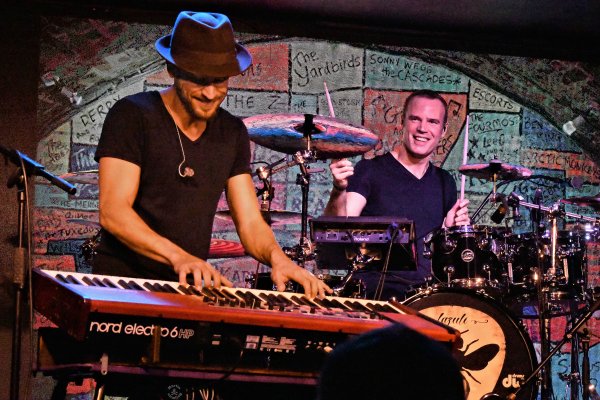 Changing the mood, J’Attends Un Printemps is a gentler, more hopeful song with beautiful piano lines, and finally Nos Ames Saoules (Our Drunken Souls) has a stomp along rhythm, the Léode going at full pelt, Domi in a frenzied dance while Beyney’s cultured guitar cuts through the beautiful maelstrom.

There can only be one way to end the show, with the traditional Nine Hands Around the Marimba, Beyney having learned his lines well and engaging in some friendly knock-about with Domi.

Fittingly, the ‘guest’ tune they play is the Beatles’ Here Comes the Sun, to which everyone sings along, and a timely reminder of the musical sunshine this band radiates every time they play. 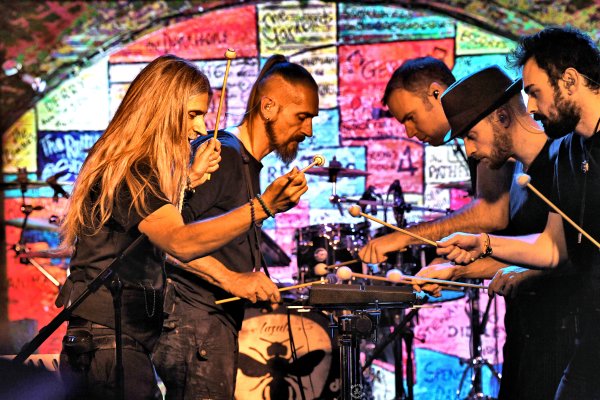 Never mind the Fab Four: Lazuli are the Fantastique Five – add merch maestro Elliot Leonetti and sound supremo Ali Laouamen who are very much part of the team, and you can call them the Sensationnel Sept (Seven).

Long may their own unique and very special French Musical Revolution continue to bring happiness and pleasure to their devoted band of British fans, but please, let’s make those audiences much bigger next time.

[All photos by Martin Reijman.]