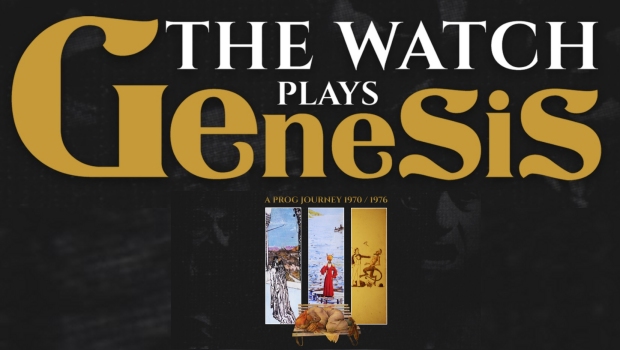 It has already been a year since Italian band The Watch visited Holland for a show. These musicians are, of course, best known as an extremely capable Genesis tribute band, with eye-catching vocalist Simone Rossetti, who does an excellent Peter Gabriel, and guitarist Giorgio Gabriel, not at all inferior to his idol Steve Hackett. Unfortunately, it is less known that The Watch, in addition to all this Genesis stuff, have also managed to build an impressive back catalogue of original material. Please, do take the time to listen to their latest concept studio album The Art of Bleeding, I assure you it’s well worth your while. But tonight the spotlight is on their rendition of the iconic work of the British legends, more specifically the live album Seconds Out from 1977. 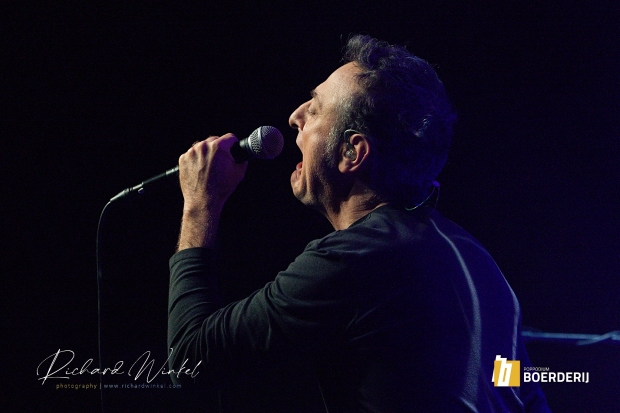 Watcher of the Skies is the strong opener of the set, and an ‘old-skool’ version of the song from Foxtrot is played. I’ve always wondered if Steve Hackett knew about the fact that The Watch was going to take Seconds Out as a theme for their new tour, after all, he did it himself earlier this year. The answer was given during the performance: Yes, he not only knew about it but wholeheartedly supports his Italian friends in their endeavour. From ‘tape’ he lets you in on this, just before the band delivers a solid version of Squonk, complete with excellent bass parts by Mattia Rossetti. Robbery Assault & Battery, also from A Trick of the Tail, is next, Valerio De Vittorio handling the tricky keyboard part with apparent ease. Carpet Crawlers is even sung with four part harmonies, quite unique for The Watch. 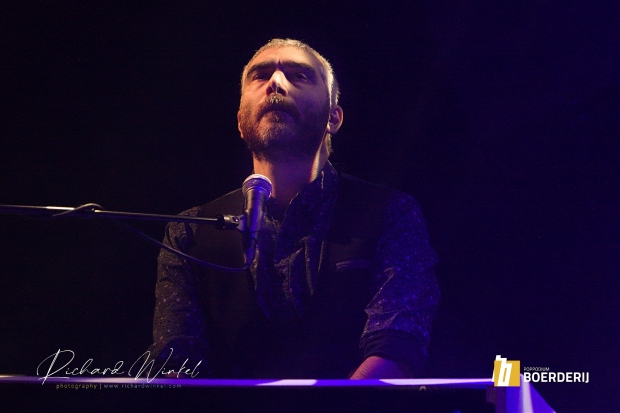 Prior to Firth of Fifth, another voice message is used, initially the wrong one, a repetition of Steve Hackett’s, but after the technician on duty realised his mistake, we hear the voice of brother John Hackett. He informs us that both the piano solo and the flute are quite complex parts in this song. De Vittorio, as always cheerfully looking into the room, does not care and plays as if he has already played it hundreds of times (probably also the truth). The flute sounds thin and beautiful, but the real highlight is when both singer and guitarist leave the stage during the instrumental part and the band continues briefly as a trio. New drummer Francesco Vaccarezza excels during this part and manages to make the audience forget that in the live version of the album the drumming part is done by two drummers instead of one – compliments! Cinema Show flows seamlessly into the moody Afterglow in The Watch’s rendition.

It’s time for a break after about an hour of playing, the band taking about twenty minutes to recharge the batteries. After the mandatory interruption, The Lamb Lies Down on Broadway is immediately started, a regular part of Genesis’ live shows at the time, as is a full and integral version of masterpiece Supper’s Ready. One can’t help wondering what an outright sensation this must have been back in 1972 – it still is today. 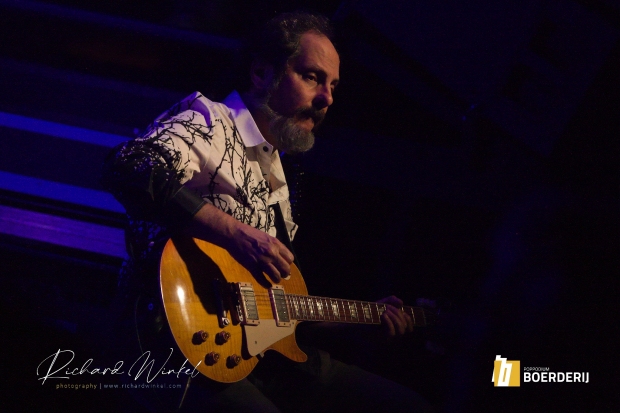 An unexpected part of the show is an ‘own’ song, Howl The Stars Down, from the band’s latest excellent studio album. ‘Own’ because it was written by ex-Hackett bandmate Nick Magnus. A beautiful song, showing just a tiny bit of what The Watch is capable of when it comes to original, non-Genesis music. As always, personal favourite Ripples is a super symphonic piece and is followed by Dance on a Volcano from the same album, funny for someone who has just returned from a holiday in Tenerife. In a live setting, the instrumental Los Endos is, as it were, attached to its predecessor; in the version by The Watch drummer Francesco Vaccarezza gets the chance to demonstrate something of his considerable capabilities in a small drum solo as a connecting factor. The band briefly leaves the stage after this last song of the regular set. The Musical Box is the well-known encore, played with dedication by the band. This is followed by stormy applause from those present, which lasts for a few minutes. 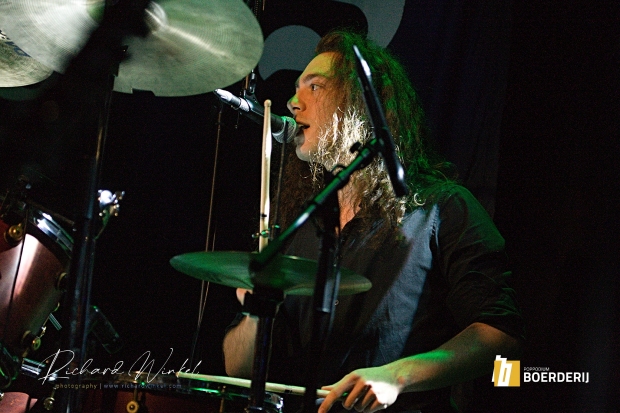 Singer/composer/leader Simone Rossetti has always had a good eye for talent and has been renewing and strengthening his quintet for years. It started with the arrival of his son on bass and more recently keyboardist De Vittorio. But his latest acquisition stole the show as far as I’m concerned; new young drummer Francesco Vaccarezza is a great asset. In the first place as a drummer, the ease with which the parts of Collins and Bruford/Thompson were played – not too shabby drummers – speaks volumes. One of the cymbal stands lost out due to his strength and clattered off the drum stage with a loud bang. With him in the fold, the opportunity arises to sing three-part harmonies, just like a real Phil Collins. Tribute to the new man, the quintet is now possibly in the strongest line-up since its inception.

Talking about vocals, it should be noted that Simone Rossetti occasionally had a hard time trying to emulate the high-pitched voice of Collins, his range fits better with that of Peter Gabriel. Another Gabriel, guitarist Giorgio, was less prominent this evening, at least in my opinion, although his parts were as pure as ever. 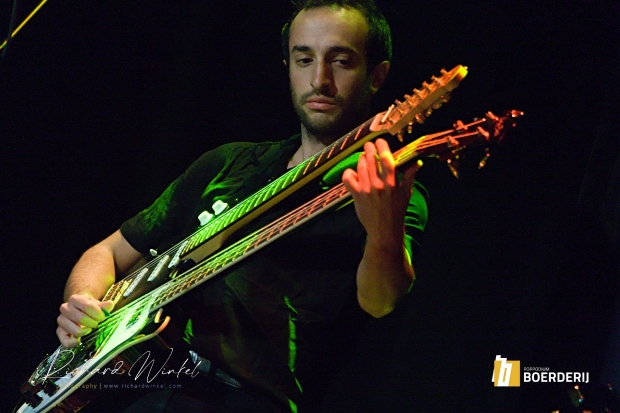 The set list is of course well known because it’s based on the original live album by Genesis from 1977. But there are a few noticeable differences: not only was the original chronological order not (completely) followed, there was also a mix of original and live songs. Of course, the flute parts don’t fit on a post-Gabriel era album while the double drum parts were bravely tackled by Vaccarezza on his own, as already mentioned. Remarkable: I Know What I Like, a stalwart during live shows, was not played this evening.

Unfortunately, the performance was marred by downright adolescent behaviour of some of those present, one of whom was on crutches, mind you. Loud talking, making of countless videos and photos and the heavy use of social media led to an emphatic application for the title ‘A..holes of the Day’. It is a pity that this kind of disrespectful behaviour, characterised abroad as ‘Dutch Disease’, is still practiced. All the more respect for the reaction of the stage manager on duty who, just before the second part of the show, made the urgent request to stop this kind of (mis)behaviour. Kudos deserved.

Nevertheless, the audience in attendance enjoyed the music of the legendary Brits, which has been rescued from oblivion (well…) in a respectful and capable manner by five Italians. Steve Hackett can be justifiably proud.

SETLIST
Watcher of the Skies
Squonk
Robbery, Assault & Battery
The Carpet Crawlers
Firth of Fifth
The Cinema Show
Afterglow
~ Interval ~
The Lamb Lies Down on Broadway
Supper’s Ready
Howl the Stars Down
Ripples
Dance on A Volcano
Los Endos
~ Encore:
The Musical Box 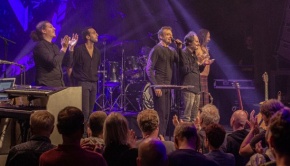 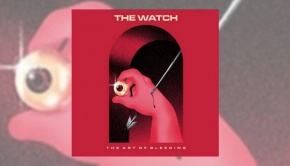 The Watch – The Art of Bleeding →