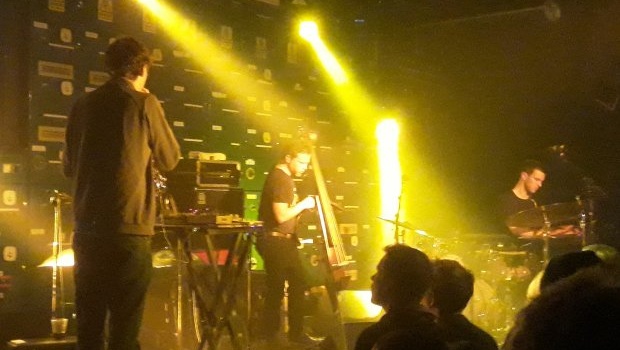 Another unexpected gig night – this is getting to be a habit – and Manchester beckons. So what’s on? Having studied the gig listings I’m drawn to Portico Quartet, a band that I’ve come across before but not actually heard. A quick trip to Bandcamp reveals that this should be something of interest, so ticket duly purchased.

Near the city centre, Gorilla is a lovely venue housed in a railway arch under Oxford Road station, plenty of space and very comfortable with decent aircon, which makes for a comfortable space, even when rammed to capacity like tonight.

Support act Phil France had just started when I arrived so I squeezed into the side by the merch desk to absorb the ensuing events. With a one-man keyboard setup at the front of the stage, Phil, who has previously worked with the Cinematic Orchestra, put on an engaging instrumental set of layered pre-programmed electronica, with triggered loops and the additional simple lines of melody or bass pulses added live over the top. The rhythms edged into dance territory here and there and the crowd grooved accordingly, responding well and giving Phil’s atmospheric set a healthy ovation at the end. It could be my cracked hearing but there seemed to be a little bit of volume induced distortion in the mix, despite my plugs, although this didn’t detract from the overall enjoyment. A nice and relaxed opening to the evening. 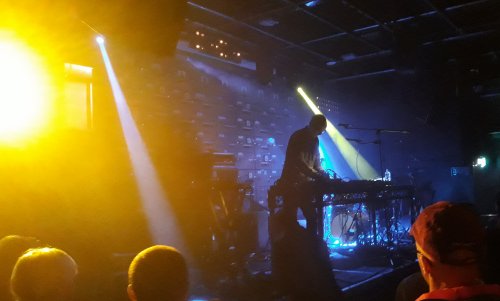 With Phil’s keyboard rig cleared away, time for the main event.

Founded in London in 2005 and nominated for a Mercury Prize in 2008, Portico Quartet‘s instrumental blend of jazz, ambient and electronic music takes in minimalist textures and utilises the Hang, a modern percussion instrument that gives the texture of tuned steel drum pans. Moving from acoustic beginnings, after the departure of founding member Nick Mulvey (for a career as a singer/songwriter) the group moved towards a wider use of electronics and looping, and after two releases on Peter Gabriel’s Real World label, the band have recently issued their fifth studio album, Memory Streams, which features heavily in the set tonight.

What becomes immediately apparent is the central function of Duncan Bellamy’s drums, repetitive patterns rising to crescendos over his frenetic rhythms, augmented by electronically treated saxophone from Jack Wyllie, the Hang and keyboards of Keir Vine and bass from Milo Fitzpatrick, either in standard guitar or electric upright forms. It’s a heady brew of Glassian minimalism, thick rhythms and hypnotic percussion with looping as a key element. 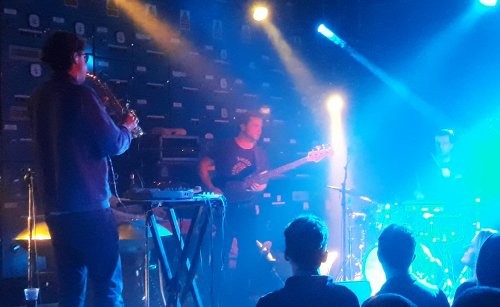 It’s ensemble music-making of the highest order, rhythms colliding and evolving in a feast of atmospheric delights, the jazz element clearly present but utilised with the other influences to service the overall experience – no unwieldy noodling here, although it would seem that the musicians enjoy an improvisational freedom during some sections, and they grab it with both hands. The quartet work beautifully together, feeding off each other’s contributions, the end result being frequently thrilling, true emotional peaks allowed to release into waves of thunderous rhythm.

Bellamy’s intuitive playing takes in synth gamelan from hand pads and additional electronic input, the ever-shifting scene playing with the rhythms, supplying fat dance beats to delight the generally young audience. The bass textures from Fitzpatick’s upright, whether bowed or plucked, together with the far-away, muffled, effects-laden sax and washes of synth and loops augmented the music beautifully, offering an otherworldly vibe.

The encore of two tracks from the self-titled 2012 album was well-deserved, and at the end the 300+ present showed their appreciation before heading off into the Mancunian mizzle, no doubt with an enhanced rhythmic spring in their step.

SETLIST
With, Beside, Against
Signals in the Dusk
Current History
Beyond Dialogue
Dissident Gardens
Gradient
Endless
Ways of Seeing
A Luminous Beam
Offset
~ Encore:
Ruins
City of Glass