Let’s get something out of the way at the outset: Nick Mason has to be the luckiest man in rock. I’ve been a huge Pink Floyd fan for years, they were the first band I really got into, but you’d never find me citing Nick for his skills behind the drum kit. Yet he’s an important and highly influential figure for me, his talents being in keeping things low-key and straightforward, a ‘less is more’ approach that allowed him much impact within the widescreen sound of later Pink Floyd with relatively simple contributions, when compared with the more technical giants of the instrument. You just cannot imagine a virtuoso technician holding the attention in the same way – it just wouldn’t work. Pink Floyd needed the more genteel approach of Mason rather than a dextrous wizardy octopus or a hairy-arsed Animal type. 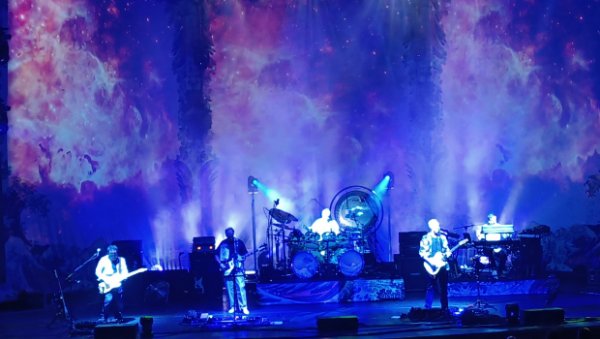 Nick’s contribution was very much the glue that held the twisting and turning Gilmour/Waters axis together for as long as it did, and after their split, a loyal and grounding foil for the Gilmour-led band. It is telling that Mason was able to remain friendly with both factions, and continue to share a stage with them both too.

Looking at the body of the band’s work, his contribution was consistent and invaluable to the whole, and his status as a living legend rightfully preserved. As singer and guitarist Gary Kemp said during this show, he is very glad that Nick was persuaded to come out from behind his Ferraris to make this band a reality – and so should we all be. Nick’s presence changes things. It becomes so much more than a very accomplished cover band. I felt myself drawn to watching the now 78 year old (78 mind!!) Mason throughout, delicately wandering around his kit, deftly using his beaters for that evocative sound on Set the Controls for the Heart of the Sun or deploying one of those effectively stumbling ‘b-dum-dum-b-dum-b-dum’ falling-down-the-stairs patterns that work so beautifully so often. No one has fallen down the stairs so elegantly. 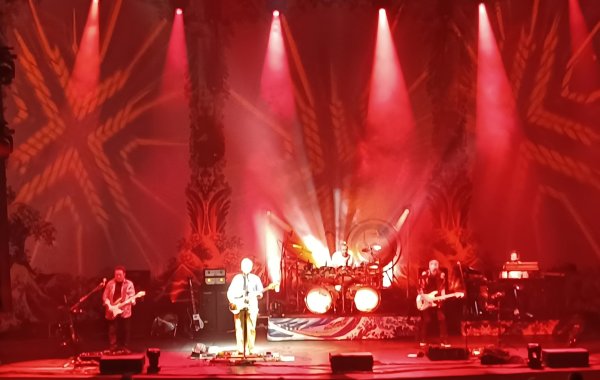 He may not be beating seven shades out of his kit but it’s still impressive to see him delivering a tour like this. Yes, he sometimes needs a cue and clearly has to build himself up for the (slightly) more intricate bits, but he remains a legend and it was an absolute joy to see him play – and at closer quarters than was possible the only other time I’ve had the opportunity, from the back of Wembley Stadium in 1987. He has the air of a retired architect allowing his hair to descend ever so slightly, which is, after all, what he could now have been, had the fates taken a different turn and the Floyd had packed it in after Syd… left.

And this show is as much about Syd Barrett as it is about Nick Mason. And Rick Wright. And Dave Gilmour. And Roger Waters. Or at least the music that they forged together in the psychedelic swirl of Swinging London and the dawn of the Space Age before the band really hit gold with the world-rogering behemoths of the ’70s. It is telling that the newest tracks featured tonight came out in 1972. This band – and this show – is a celebration of those pre-stadium days of freakouts and lysergic weirdness, initially driven by the strange workings of the Barrett mind. 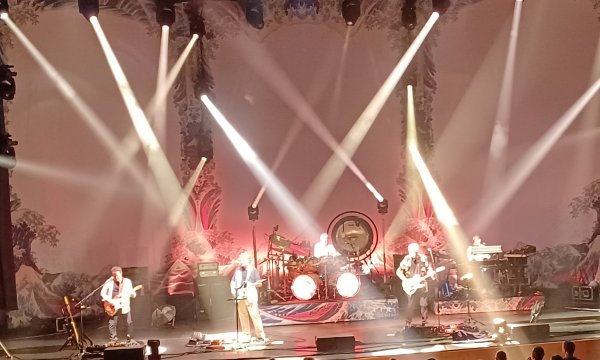 The band stress that this isn’t an attempt to replicate the times or the original recordings, it is intended to offer an experience of interpretation, supported by wonderful sound and staging, utilising enormous screens, excellent lighting and electronic takes on the olde worlde liquid lightshows of yore.

Ensconced in a very comfy seat with a first class view, my anticipation was high just looking at the stage. When the lights went down and the band wandered on it got exciting, and to see Nick taking his place and picking up his sticks was just beautiful. He must really want to be doing this as he sure as hell doesn’t need the money. Kicking off with a super-charged take on Meddle‘s snarling opener One of These Days was a master stroke, Guy Pratt peeling off the echoey basswork with aplomb, and with the lights going mental, I had tears rolling down my face, and I didn’t care. Stunning. 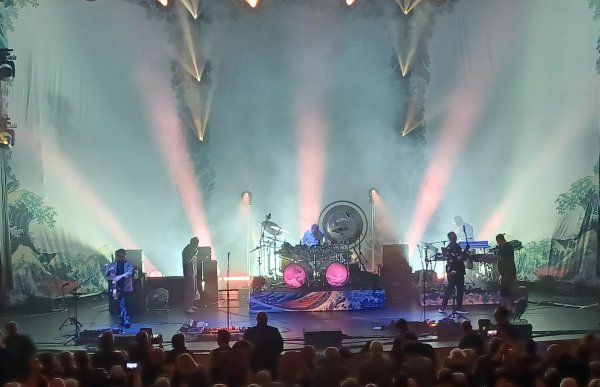 The band is top notch. Guy Pratt should be well known to Floyd fans, having featured in their shows since 1987 (and also being Rick Wright’s son-in-law). Gary Kemp was a revelation to me, having only a passing awareness of his work with Spandau Ballet. He was excellent throughout, both vocally and pulling off the guitar parts, particularly Dave Gilmour’s wonderful soloing during Echoes, a wonderful culmination to the main set. Former Blockhead Lee Harris added additional dimensions with guitar, slide and backing vocals, while one-time The Orb collaborator Dom Beken added the Wright stuff with precision.

The first set progressed with classic Barrett in Arnold Layne and Candy and a Currant Bun, Nick reminding us how a name change was necessary for the latter to avoid the banning fate received by the former due to its lewd content, and the unreleased until recently early track Vegetable Man. Throughout, Nick addressed the crowd in droll fashion, drawing applause when referencing Syd. There were double-headers from Obscured By Clouds and Atom Heart Mother, where an excerpt of the title piece was subsumed within a beautifully heartfelt take on If. Fearless saw the recorded Anfield singing augmented heartily within the hall, and a climatic double punch from A Saucerful of Secrets culminated in a fantastic Set the Controls for the Heart of the Sun to end the first half, with both Mason and Pratt giving the gong a good seeing to. 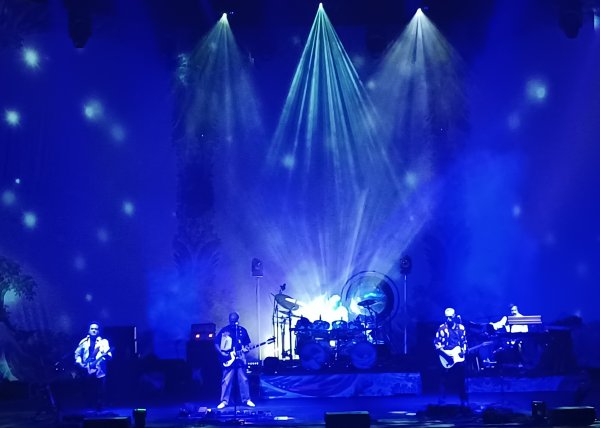 After the well-deserved interval, the spaciness continued with Interstellar Overdrive and Astronomy Domine from Floyd’s debut, Piper at the Gates of Dawn, before The Nile Song from the More soundtrack. Two more from Obscured By Clouds and another well received mention, this time for the late lamented Richard Wright, before a rousing See Emily Play, Echoes bringing the house down to close. Pratt and Kemp beautifully complemented each other vocally and all in all, you couldn’t really ask for much more.

Encoring with a sublimely slinky Lucifer Sam was a masterstroke, followed by the ethereal beauty of A Saucerful of Secrets itself, the band returning for just one more with a riotous Bike ending the show on a massive high and sending me scuttling off into the night singing a song about a mouse called Gerald. 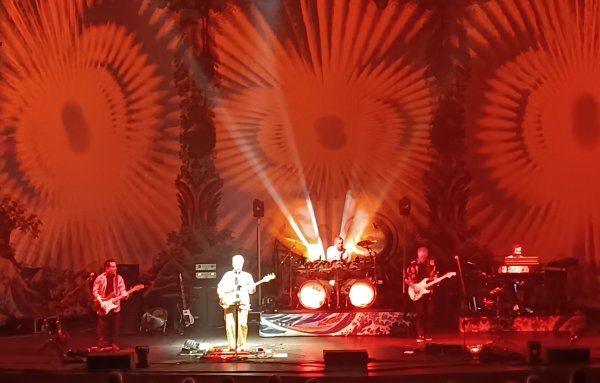 This is all about nostalgia, but brought bang up to date to make it better than it once was, successfully turning it into something of itself. It’s not the kind of show you’re going to go to if you don’t like (or are unfamiliar with) early Pink Floyd, the beautiful childlike absurdity of a lot of the Syd stuff and often fey atmospherics of some of the others likely to be anathema to a dyed-in-the-wool fan of The Wall and its ilk, but it was such a lovely experience for me and I felt all warm and fuzzy at the end, safe in the knowledge that Nick Mason is still out there somewhere being Nick Mason.

I haven’t listened to a lot of Floyd in recent years, and even less of the really early stuff, but this show brought all those memories of being 16 again and buying Relics in Woolworths – as Kemp reminded us, because it was half the price of the other Floyd albums. Happy and much more innocent days.

Thank you Nick for caring enough to do this. 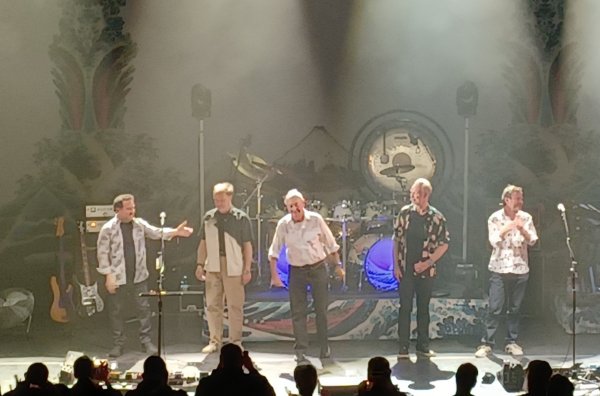