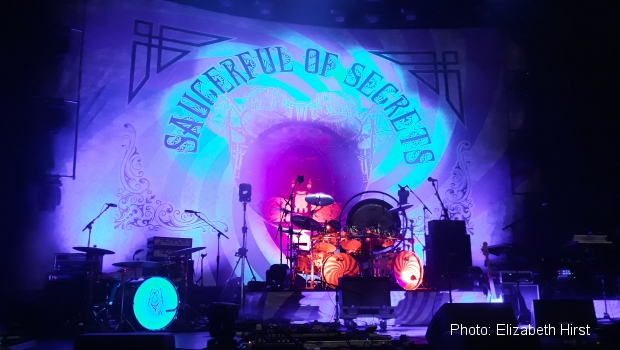 One of the more surprising recent projects to have arisen from giant bands that bestrode the planet in the ’70s is Nick Mason’s Saucerful of Secrets.  Somewhat out of the blue, the rather reticent and unassuming drummer for one of the most famous bands of all time, Pink Floyd, decided to put together a talented band and in 2018 commenced touring, playing Floyd material from the start of the band’s career in the mid- to late-’60s, prior to the gargantuan worldwide hit of Dark Side of the Moon, released in 1973. Following a successful jaunt around North America, Mason and his crew recently rolled into Cardiff for the first of five U.K. dates before embarking on an extensive European tour… so was it any good?

The short and emphatic answer is most definitely : YES!

Nick Mason and his band have cleverly put together a potent and fun mixture of psychedelic and rock material associated with the mad genius of Syd Barrett and the more progressive and experimental direction the band was moving in after his departure, before Pink Floyd really entered the ‘Rock Behemoth’ stage with Dark Side… It would have been easy to just play it safe and perform the most well-known material from that era, and there are plenty of those gems, but they have also chosen to play more obscure songs which Pink Floyd never actually played live in concert. There is even one quirky song, Vegetable Man,  which was only half written and never recorded properly by Floyd, which they have revived for this tour.

The evening began with support from a band with another Floyd connection as Roger Waters’ son (and Mason’s Godson), Harry, played keyboards for a band called McNally Waters. They played a short set of songs in the Americana style, with echoes of Little Feat and the flavour of New Orleans. It was a curious choice of support which was entertaining but not essential.

The venue was completely full as Mason and his band came on and launched into the unmistakable and exciting rhythms of Interstellar Overdrive. Lee Harris and Gary Kemp chimed out the legendary riff with Guy Pratt, previously the bass player with later Pink Floyd, laying down thunderous bass… but my eyes were on Nick Mason – after all, he was the true legend on show tonight. What were we going to witness?  After all, in other legendary bands it has been the drumming which original band members have found the hardest to sustain later in life due to sheer physicality of the instrument – Alan White is a shadow of his former self in Yes and Phil Collins will never be able to fully drum again. I need not have worried – Nick Mason sat there calmly drumming with precision and coolness, performing with an assured economy of effort and skill. What was also clear was that this was a man who was clearly just having some fun. That sense of enjoyment seemed to have infected his fellow performers who were also clearly just delighted to be playing this iconic material to a packed venue. Interstellar Overdrive morphed appropriately into a similarly cosmic Astronomy Domine, embroidered with weird feedback effects, and the response was ecstatic. Nick Mason stood up to greet the crowd and explained they were “NOT the Australian Roger Waters Band nor the Antiques Roadshow”. He then asked ‘Professor’ Lee Harris to explain when Mason would have played in Cardiff previously. Harris reminded Mason that Pink Floyd first played in Cardiff a mere 50 years previously, at the Top Rank (long since gone) in 1969, and then Sophia Gardens in 1971! Then Harris showed that his knowledge of Floyd history is matched by his excellent guitar skills as he deftly led into more Syd Barrett psychedelia with the kaleidoscopic Lucifer Sam. 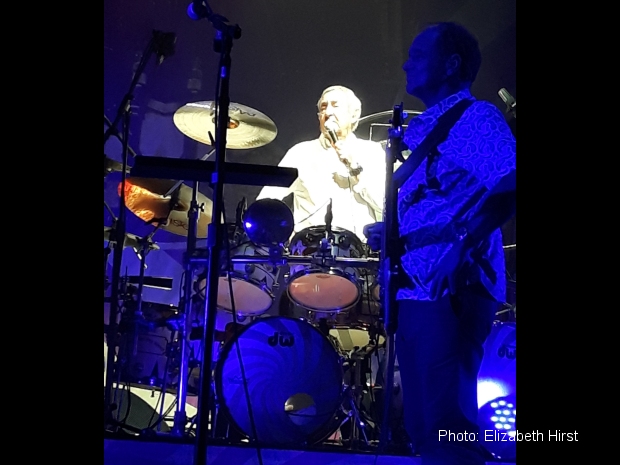 The psychedelic genius of the name ‘Syd Barrett’ ran through the evening like a stick of rock with playful and groove-laden versions of the classics Arnold Layne and See Emily Play, which featured particularly fine bass play from Guy Pratt. Mason paid tribute to Barrett, whose inimitable image was in silhouette on the colourful backdrop, after they played the frankly rather bonkers Vegetable Man, which he explained had been intended for their second album, Saucerful of Secrets, but was never properly recorded. Another Floyd band member, Richard Wright, was also rather touchingly referenced by Guy Pratt. He introduced Remember a Day as a song about the nostalgia of lost childhood, which he found poignant as the now sadly deceased Wright was the grandfather to Pratt’s son. (There’s also a slight irony that Nick Mason’s band is now playing this song as the drums for this song on the album Saucerful of Secrets were reportedly played by the producer Norman Smith!)

These tributes were paid respectfully and briefly, as the emphasis for the evening was clearly upon positively celebrating the great music created in that era. Highlights included If from Atom Heart Mother, which Gary Kemp began simply with an acoustic guitar before singing melodically, followed by Pratt on vocals (a little less melodically it has to be said!). If then transmogrified into an instrumental section from the epic Atom Heart Mother before the classic melancholic tones of If were reprised so well by Kemp in a sensitive coda. Gary Kemp is better known for his time with new romantic band Spandau Ballet, but he is clearly a talented guitarist and singer, perfectly suited to pulling off this material with aplomb. He was particularly effective on Fearless from Meddle, complete with football crowd singing effects. He also imaginatively indulged in some electronic sound effects on various numbers and had an easy charm with the crowd, although put a slight foot wrong in a Cardiff venue mentioning his boyhood Welsh holidays… in rival city Swansea!

Classic song after classic song delighted the crowd, which had a wide age range – clearly, some long-time Floyd fans were bringing along the ‘next generation’ as part of their musical education. There were some really nice touches amongst the great performances, such as the voice of legendary DJ John Peel voicing the intro to Let There Be More Light – as Mason said at the beginning, there was a very real sense of a ‘Time Machine’ transporting us back to another era. Another touching and locally inspired tribute came with the, what Pratt described as, ‘dumb-ass rock’ of Nile Song from More. Gary Kemp was lent a vintage electric guitar by the son of Micky Jones, of the great Welsh rock band Man, and he really thrashed it for this proto-heavy metal number in an exciting guitar duel with Lee Harris.

Set the Controls for the Heart of the Sun was suitably stellar in quality, with Dom Beken providing subtle, bewitching keyboards, but the star of this number was the hypnotic drumming of Mason who was at times playing with eyes closed and clearly just enjoying the groove. He was also delighted to announce that playing it without Roger Waters meant he finally got to play the gong! Lee Harris shone on the final number with slide guitar effects on One Of These Days, and of course, Mason excelled as the number exploded after the “One of these days I’m going to cut you into little pieces” vocal interlude ignited a titanic drumming performance under Harris’s sinuous, serpentine guitar solo. It was a spectacular end to the main show and the audience as one rose to their feet instantly. This had been truly special.

For a band called ‘Saucerful of Secrets’, it was perhaps inevitable that for their encore they played that song, and it was a full-on weirdly psychedelic, effects-drenched piece, with Pratt additionally on gong and cymbals. Point Me at the Sky rather appropriately ended the evening – for this was a band that had taken the crowd on an admittedly nostalgic journey into the past of a legendary band, but had done it with such joy and skill that they had indeed launched the crowd towards the heavens.

This reviewer confesses to not being massively familiar with or previously overly enthusiastic about the more psychedelic Pink Floyd music of Barrett and the albums prior to Meddle and Dark Side of the Moon, and frankly, I nearly did not bother going. However, in hindsight that would have been a big mistake – a VERY big mistake! Like the rest of the crowd, I was entranced by the kaleidoscopic and suitably psychedelic atmosphere conveyed by the music and light effects, and it really didn’t seem to matter whether the music was from 1969 or 2019 – it was timeless.  We could debate whether such shows are merely just exercises in backwards-looking nostalgia, however I would emphatically say that with songs that still sound so fresh and exciting, performed so skilfully and engagingly by a great band, including one of the legends of that generation, some things just never really go out of date. 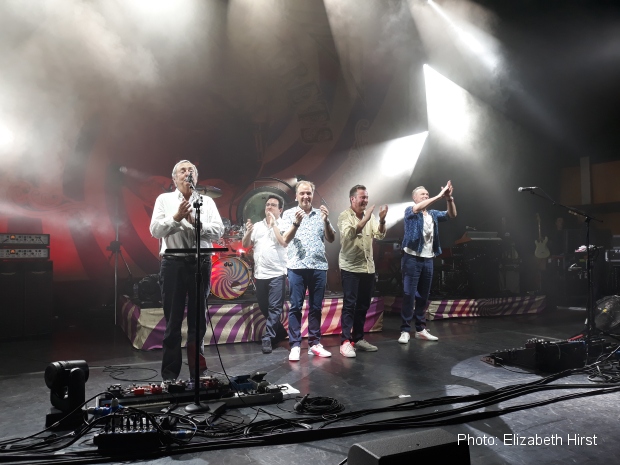 [Photos: Elizabeth Hirst (with thanks and used with permission) & Leo Trimming.]

SET LIST
Interstellar Overdrive / Astronomy Domine
Lucifer Sam
Fearless
Obscured by Clouds
When You’re In
Remember A Day
Arnold Layne
Vegetable Man
If
Atom Heart Mother / If (reprise)
The Nile Song
Green Is The Colour
Let There Be More Light
Childhood’s End
Set The Controls For The Heart Of The Sun
See Emily Play
Bike
One Of These Days
~ Encore:
A Saucerful Of Secrets
Point Me At The Sky 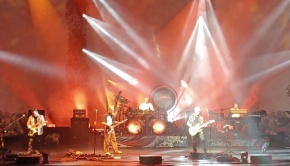