21st February 2022 was a significant date, as it was the first date of Van der Graaf Generator’s much Covid-delayed tour, and also my first venture out to a gig for over two years, and I like to think that the excitement I felt at being “back in the fray” was replicated in the crackling performance given us by the three sprightly septuagenarians spread across this generous stage in the heart of England’s second city. I say that, because the energy emanating from the front of house was palpable, and the relevance of the songs to the perpetrators’ circumstances meant that there was never a sense of going through the motions, or of renditions of older classics taking on an air of cabaret. Some contemporaries of Hammill, Banton, and Evans should take note. This is how it is done.

The setlist included three songs from the band’s latest, and probably final album, the low-key but nonetheless engaging Do Not Disturb, released back in September 2016. The first of these ended the first set, and was that album’s last track, Go, having the air of a full-stop on an extraordinary career with its lyrical adieu. 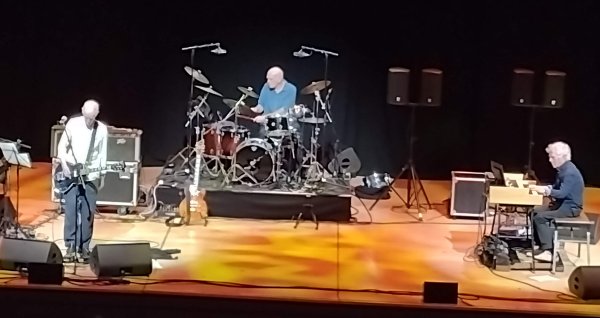 Taking place a few days before that mad fucker in the Kremlin turned the world of our continental neighbours upside down, obvious choices like Nutter Alert or Every Bloody Emperor were absent this time, but in their place was an intriguing and mostly unobvious setlist. Perhaps most surprising was an emotional A Louse is Not A Home, an early Hammill solo song, albeit backed on record at the time – a mere 48 years ago! – by Evans, Banton, and Jackson during the band’s first hiatus.

I mentioned relevance earlier, and what is a 70-something year-old guy going to sing about if not the frustrating process of aging? Present and correct in the first set were two “your slippers are in the fridge” anthems, namely Over the Hill and an angsty All That Before. The latter, with Hammill’s nervous mangling of the riff from You Really Got Me makes me smile every time.

Note perfect they were not, but part of the visceral energy of this band has always come from playing all the right notes, but not necessarily in the right order! Having said that, this trio know each other so well that any musical divergence, usually by Hammill, is easily corralled, usually by Evans, who was sweet as a nut throughout. Banton builds keyboards for a living and the thunderous noises he coaxed out of his otherwise unassuming rig made me visualise the unfeasibly massive and much tinkered with Hammonds of yore. The roadie will be grateful for the compact nature of modern electronica, I’m sure.

After a short interval, the second set shows how seamlessly the modern pieces Alfa Berlina and Room 1210 from that final album fit in amongst the epics of old. Ending with the inevitable and mighty Man-Erg, which itself was somewhat prescient, “the killer lives inside me”, indeed, and encoring with Still Life was almost perfect (what, no Killer?), and a tremendously climatic end to a great evening’s entertainment. 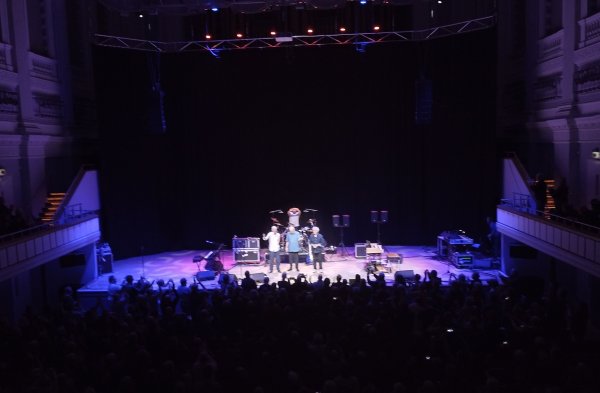 To bookend with Roger’s review, Van der Graaf Generator ended what might well be their final UK tour at the lovely Forum in Bath.

This is a band that has had nothing to prove for many years now, and since their perhaps surprising return in 2005, following a hiatus of almost three decades, they have wilfully failed to rest on their well-deserved laurels. This third phase of activity has seen five studio albums, three of them featured tonight in a set that balanced recent history with ’70s heyday.

Arriving to warm applause, the trio took their places, with Peter Hammill and Hugh Banton at their respective keyboards at right-angles to the audience, Guy Evans at the back between them. This led to a fascinating performance throughout, each watching the others for cues and nuances, particularly Evans whose eagle-eyes followed his bandmates intently as he played off their work. 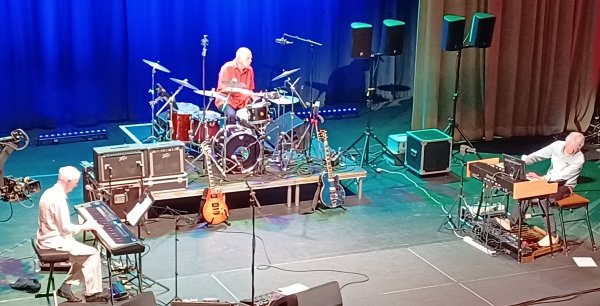 After the interlocking piano and organ intro and progression through the marvellous Interference Patterns, there were some changes in a setlist which had evolved through the tour. I was very pleased to hear Every Bloody Emperor (from 2005’s Present), a bitter song that was all the more potent due to recent events, which Hammill confirmed left them with little choice but to play it. It was immediately apparent that the trio were well drilled and Hammill in fine voice.

And Hammill’s idiosyncratic delivery isn’t the only unique voice; the band itself is without parallel in the imaginative way they blend their individual skills. Banton deploys the sophisticated elements of his instrument in stately baroque waves that ripple against the visceral edge of Evans’ organic and responsive playing, an almost punk aura coming into play as Hammill moves to electric guitar later in the set. It’s this potent combination of angsty fire with the soothing balm of melody that makes the band the monstrous force that it is. All the more stunning as it is just the three of them. 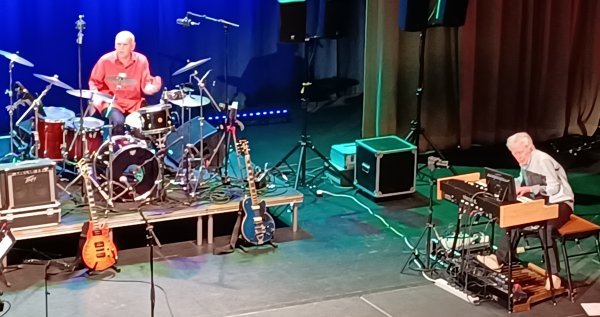 You could watch any one of them individually for the entire show and be mesmerised. Banton’s feet bounce around the bass pedals as he peels off magnificent runs or uplifting chords that fill the venue with warmth, a calming presence of precise movement. Likewise Evans’ sublime subtleties, vision and hard-hitting intensity. All the while Hammill shrieks and swoops, his vocals setting an other-worldly scene in which the music happily resides. In other circumstances, his guitar playing would no doubt be seen as almost laughably amateurish, sometimes appearing as if he had barely held the instrument before, but the visceral intensity he rings out of it works perfectly in the swirling whole of the sound the band presents.

Hammill’s A Louse is Not a Home was unexpected, but a welcome addition, and powerful readings of a duo of tracks from Still Life saw Childlike Faith in Childhood’s End and La Rossa being received like the old friends they are. I didn’t expect to get Masks, from 1976’s World Record, but here it was.

The first set ended with a beguiling and thoughtful Go, the last track from their most recent (last?) album, which also featured with Alfa Berlina and Room 1210 to underline its quality.

Over the Hill was as enticing as ever and the uproarious and eerie symphony of the ubiquitous Man-Erg closed the main set in an almost demonic finale. The more than deserved encore delighted with the oldest piece of the set, House With No Door from 1970’s H to He, Who Am the Only One, a subtly low-key end but an almost perfect come down from some of the high-octane antics that had preceded it; elegant and simply beautiful.

As the final notes ebbed away, Hammill sat still over his piano, perhaps contemplating that they might now actually be done. 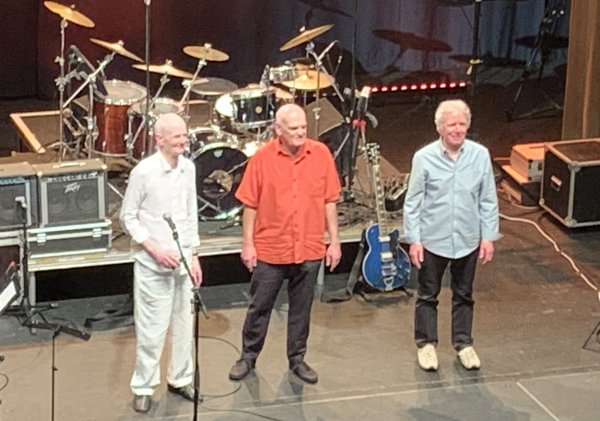 VdGG have never been a nostalgia act, keeping to their inquisitive and imaginative agenda right to the last, reinterpreting older songs and forging them anew in this trio setting. If this long delayed show is a last hurrah, then it sees the band going out on a high with a beautifully weighted set that cast the newer material within a raft of classic pieces, nothing feeling out of place. The show was filmed with a multi-camera set up so there will hopefully be a high quality record of this late period of the band’s career recorded for posterity.

I certainly hope that I get to enjoy these wonderful musicians in the future, but if not, we will never see their like again. 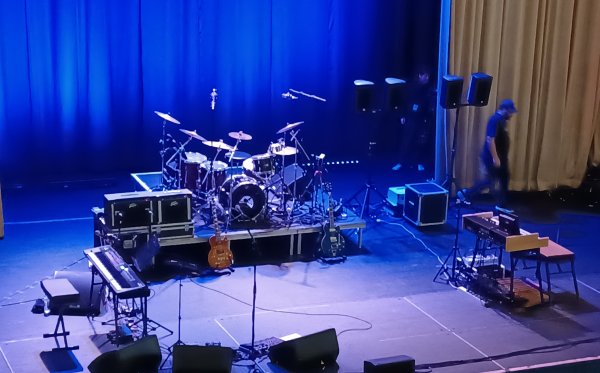