Nostalgia. Tribute Act. True enough terms, and there are those who will dismiss such bands and artists as riding on the shoulders of giants, but they keep the music alive, present it to audiences who might never have had the opportunity to see the original acts, and all said and done, generally provide an excellent evenings entertainment. Sometimes it even earns the musicians enough income to lay down new original material. 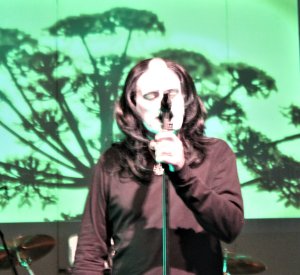 The Book are a tribute act, and a very good one too, playing the work of Genesis from inception up to and including 1977’s Wind & Wuthering. They perform with heart and soul, not a clinical reproduction but a nuanced and balanced representation of the original band during that period. No two Genesis performances were ever the same, always a tweak here or there.

Having rushed to my seat, wheezing after a dash (!) from a nearby car park with no gate to lock, I took my seat to hear Richard Macphail’s introduction. Richard was there, tour manager, driver, dogsbody in those early years, his appreciation of TBoG obvious by his presence, well, that and the urge to shift more copies of his book, My Book of Genesis, from his spare room. A very good read it is, I had my signed copy the Christmas before.

As was then is now, with a rumble the broody introduction of Watcher of the Skies opens the first of two sets. The sound isn’t bad, and much better than my introduction to Genesis in a field with several thousand people circa 1973! The drums are loud, Nigel Betteridge’s voice slightly overshadowed by them on the first song, but this rapidly improves. The batwings still hold a sense of menace that they did when Nigel was Peter. Howard Boder does a magnificent job of channelling Tony Banks on keyboards. 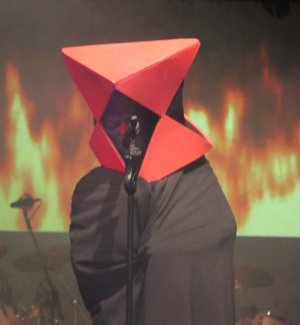 The theatre is just shy of capacity, not a bad turn out for TBoG’s first visit to Exeter; do come again. The Fountain of Salmacis is introduced in a very Gabrielesque style by Nigel Betteridge, before a combination of Boder’s keys and Bob Arnold’s 12-string virtuosity lead the song in. Bob Arnold excels on the guitar, both 12-string and lead, a diffident reflection of Mr Hackett, right down to the perch on a guitar stool. It’s a nostalgic tour de force.

The Return of the Giant Hogweed is barked out with appropriate level of bark and venom, in which the audience participates. I think I was thirteen when I finally acquired this album and the cardboard karaoke that I was in 1974 barked along, harsh hoary roar and prepubescent high in equal measure. The voice soon dropped.

Time for a vocal rest as the stage is left to our talented musicians to perform After The Ordeal, a little show case for everyone, bass by Kirk Watson like a glue between body parts, and all the while a back drop of images to delight.

Britannia takes the stage, asking in these confusing times if we could tell her where her country lied; not yet, but soon, and we will come to dance with those moonlit knights. The tale within not that far removed from our present predicament; though the memory that struck clearest for me was of thousands and thousands of Green Shield stamps for a tiny black and white portable! 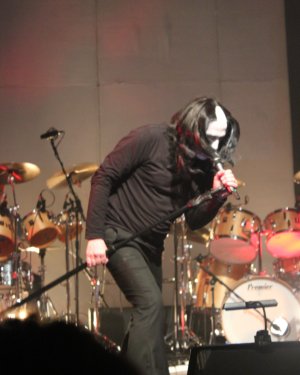 The Musical Box still tugs at my heartstrings, written for the most part by Anthony Phillips, the tale of a decapitated sibling and his ghostly passage through puberty, lust, carnal desires, until Nursey dispels the errant spirit. Our singer delivers well, from “youthful Henry to decrepit lustful old man”.

And so, set one must end with The Knife; raw energy, a good five years before when first heard, but still with a rasp the like of which was unheard until punk. Played flat out, and suitably energised, it would have given the punks of ’76 more than a run for their money (John Lyndon in one interview confessed to liking Genesis). A taste of yet to come, and first sight of drummers two.

Like father, Like son; the father Genesis, the son The Book. Squonk, the song of a slightly cross teenager opens as material from A Trick of The Tail, The Lamb, Selling England, and Foxtrot are performed. Now for the most part inhabiting the Collins persona, Nigel’s performance seems more confident, though nowt were wrong with his Gabriel. Costumes come and go, at one point three 12-strings play, and interpretations of Genesis material are delivered, never performing the same thing twice, this represents the band well as I understand that other acts may be a more clinical portrayal; give me the warmth every time.

Supper’s Ready, I never expected to see this in its entirety ever again, and a humbling dedication of it to me, little bit choked there guys, merely sought to get you the audience you deserved. A good crowd, near capacity for this, I think, the eldest of Exeter’s theatres, and probably why no pyrotechnics for this show. Shame, but no mind. 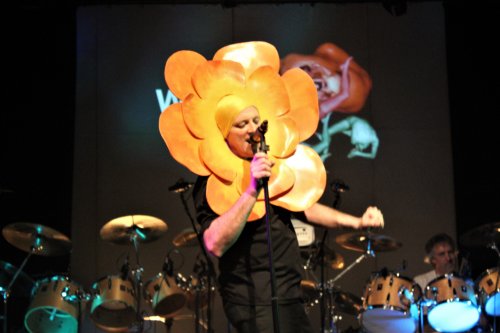 Trick revisited with Dance on a Volcano, and a great duet between Phildas Bhakta and Russ Wilson, two very talented drummers. Phildas regaled me with the story of how she came to the music of Genesis, scary as she found it as a teenager when I was already in my late 20s, but what it does establish is that music can be ageless, as I am tonight.

Los Endos closes before the token depart stage left, return and encore; I Know What I Like, with Richard Macphail joining the band on backing vocals, audience participation and the close to a wonderful evening. Standing ovation duly delivered, time to briefly share a few words with our players before we depart to avoid getting locked in car parks. Bob Arnold told me that they are working on a rendition of The Cinema Show, and I look forward to seeing and hearing that.

The tributes have their place, and tonight I witnessed one of the best. The tour continues, see their website, and I’ll see you again at the Fusion 2 Festival in Stourport on Severn.

SETLIST
Part 1:
Watcher of the Skies
The Fountain of Salmacis
The Return of the Giant Hogweed
After the Ordeal
Dancing Out with the Moonlit Knight
The Musical Box
The Knife
Part 2:
Squonk
The Carpet Crawlers
Firth of Fifth
Cage Medley
Supper’s Ready
Dance on a Volcano / Drum Duet / Los Endos
~ Encore:
I Know What I Like (In Your Wardrobe)