I have waited many, many years to see Queen. From my late teens onwards, events always seemed to conspire to prevent me making it to one of their concerts: illness, exams, parents! But then, just on the cusp as it was about to happen, Freddie died. And in the aftermath of that agonising raw upheaval and heartbreaking loss, somehow there was an aching finality to the feeling that this was the end: Queen would never exist again.

Yet here I am, over thirty years later, sat in the O2 Arena in London, a magnificent venue with superb acoustics, staring at an elaborately constructed and illuminated stage screened with a semi-circular neon display “Queen + Adam Lambert”, along with a long glossy black runway extending deep into the standing area and flanked on either side by an excitable audience with scarcely concealed anticipation and eager thirst for what is to come. And still I wonder: is it really Queen?

Any doubts I have been entertaining are ruthlessly put to the sword as the background music of curious electronica fades away and the band rip into Tear It Up along with two older songs from their catalogue, Seven Seas of Rhye and Tie Your Mother Down. Instantly the visuals are striking. The theme of the evening revolves around animated sequences of the robot from the News of the World album cover, along with a spectacular light show which is perfectly coordinated and flawlessly executed to showcase each member of the band to maximum effect.

There is little time to form first impressions. The breathless pace and energy of the opening builds an impressive and relentless momentum which effortlessly propels us through an engaging sequence of Fat Bottomed Girls, Killer Queen and Don’t Stop Me Now. The harmonies are a delight: I have never fully appreciated purely from the studio albums the tightness of the vocal arrangements, nor the considerable complexity of the orchestrations which make them such a feature of Queen’s music. The perfect mix this evening throws them into glorious relief and they are a delight to savour. 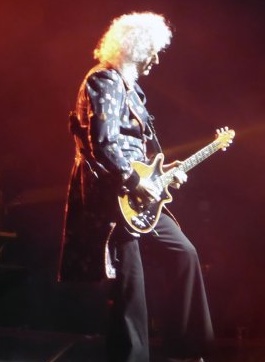 Brian May is enthralling: a compelling and commanding presence both on the stage as well as within the musical performance. Watching him as the evening unfolds, a rather sobering revelation starts to dawn. Freddie’s scintillating charisma and the sheer personal magnetism may well have captured the limelight; but on the strength of tonight’s offering, Queen have always been rooted in Brian’s unwavering musicianship which lays the foundations and acts as a catalyst for everything which happens – musically – around him.

That we can finally see this is in no small part down to Adam Lambert’s utterly magnificent and intoxicating performance. The times have changed and Lambert is not afraid to openly parade his sexuality in ways which perhaps Freddie never could. Glorious costumes, high heeled boots, a golden spangly cloak and crown, leather skirt and eye-liner are superb adornments to a stage style which enhances the songs being sung in ways which are fresh and illuminating. 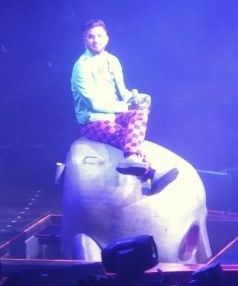 At one point he rises through the walkway stage, perched on top of a model of the robot’s head, cracking jokes about its location in relation to his arse. Bicycle Race sees him mount a flower adorned pink tricycle and ride it around the stage. And what let’s him pull all of this off with such aplomb is the fact that his singing is absolutely riveting, a towering voice with a greater register than Freddie’s but also packed with huge subtlety and deep reserves of nuance.

His range is amply demonstrated with I Want It All, packed with bombastic, anthemic bluster, the heartbreaking Who Wants To Live Forever and the measured defiance of The Show Must Go On. He is, in every way, the perfect complement to and fit with the Queen ensemble. Living with the legacy of Queen and the ever present reminders of Freddie isn’t easy, but Lambert is a superb singer and I think it is a pity he seems almost forced to be (voluntarily) self-effacing at points in the set about his place and role in the band.

He’s not Freddie; we all know he’s not Freddie. Nor is he trying to be. But whilst he handles the deferment to his predecessor so graciously, nevertheless he deserves recognition in his own right for what he brings to the possible future of Queen. He is his own man. He brings his own distinctive style, identity and nuances to the songs which is new, vibrant and exciting. Queen need this infusion of life, vitality and novelty if they are to carry on. Lambert fully deserves his rightful place at the front of the stage.

No less deserving of comment is the dual drum set up which is the powerhouse driving the engine room of tonight’s show. Roger Taylor is a calm, composed and stately figure who sets a determined and tenacious tone from start to finish. He is joined by Tyler Warren, at one point entering into a mesmerising drum duel, Taylor positioned at the front of the walkway, Warren on the main stage. It finishes with Taylor rather wistfully praising the Foo Fighters as being one of the few bands, like Queen, who work without a click track. “When you have so many superb musicians like this”, he says, “you don’t need a click tape”.

The finale is spectacular. Lambert has the crowd doing synchronised handclaps to Radio Ga Ga, and as canons fire ticker tape into the auditorium he is elevated high above the stage for a thunderous and truly memorable rendition of Bohemian Rhapsody. The encore begins with a tape of Freddie doing his trademark call and response routine with the audience before the band return for the mandatory We Will Rock You and We Are The Champions.

I am not ashamed to confess that I cried. Thirty years on I finally lived a dream I never thought would happen. It was magical; it was dramatic; it took your breath away. The show does go on: this really is Queen and one day I sincerely hope there will be a confidence on the part of everyone concerned, fans included, not to need the “+ Adam Lambert” as part of the show.

SET LIST
Tear It Up
Seven Seas of Rhye
Tie Your Mother Down
Play the Game
Fat Bottomed Girls
Killer Queen
Don’t Stop Me Now
Bicycle Race
I’m in Love With My Car
Another One Bites the Dust
Lucy
I Want It All
Love of My Life
Somebody to Love
Crazy Little Thing Called Love
Drum Battle
Under Pressure
I Want to Break Free
You Take My Breath Away
Who Wants to Live Forever
Last Horizon
Guitar Solo
The Show Must Go On
Radio Ga Ga
Bohemian Rhapsody
~ Encore:
Day-Oh (Live video clip of Freddie Mercury)
We Will Rock You
We Are the Champions
God Save the Queen