This was a bit of an odd gig in all honesty. Eugene Rogers at Progressive Ears asked if I was interested in attending this concert to celebrate the download release of Swan Song Live from Servants of Science, and upon listening to the album I determined that this was a band that held an appeal for me. I was duly contacted by lead singer Neil Beards, and as we only live about 50 miles from Chesterfield and my wife loves live music, we accepted the kind offer to attend the gig.

This was a very different type of evening as it was not just a prog gig per se. The theatre itself was easy to miss as it is sandwiched between two houses, but that didn’t deter everyone enjoying a relaxed evening of fine music from the three acts performing, namely Me and Mr. Jones, Lorna and Servants of Science.

The evening was opened by folk band Me and Mr. Jones who entertained the crowd outside the theatre whilst final preparations were concluded inside, after which they opened the show properly with some clever and intricate guitar work and strong vocals with interesting subject matter to their songs. This was followed by Nottinghamshire based dream pop outfit Lorna who had a great sound and some very classy songs. They have released several albums via Bandcamp already and a new one is scheduled for September. Their music is eclectic with great use of flute and violin which add some very pleasing sounds to the songs in a very lively and enjoyable set. Another band to look out for if you like classy pop with good lyrics. 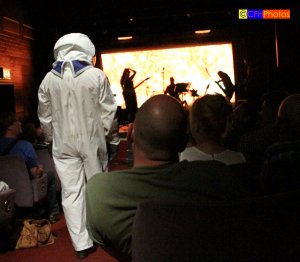 Then came Servants of Science, who were formed in 2017 in Brighton by Stuart Avis (keyboards and guitar) and Andy Bay (lead guitar). They added singer Neil Beards to the project and completed their debut album, Swan Song, the same year. With strong elements of the Pink Floyd sound and Roger Waters like vocals, this is a sure-fire winner.

This show was to be a full rendition of the Swan Song album, opening with Another Day. Neil Beards approaches the stage in a NASA space suit (imported from America at considerable expense, apparently). It’s a warm summer evening in a small and unventilated theatre with a full crowd inside – talk about sweating for your art! Dedication above and beyond, but it gave a strong theatrical tone to proceedings. The space suit was ditched shortly thereafter though as Neil moved to his acoustic guitar to sing and play. 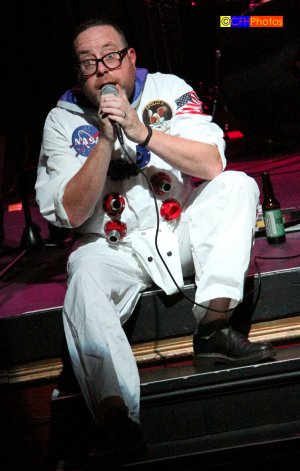 The show was very visual with great backdrops projected onto the rear wall. The band sounded especially fine and tight, Andy Bay sporting a very snazzy shirt to match his equally snazzy Strat, singer Helena DeLuca clad in an enticing black dress, and Stuart Avis in jeans and t-shirt, all propelled by the sturdy drumming of Adam McKee.

The band were seriously smoking, giving a very tight and cohesive sound that showed off the subtleties of their music very well. The crowd were equally receptive as the band played right through their debut album including the epic Burning in The Cold. The show was not overly long but was nonetheless very satisfying and they encored with a version of Comfortably Numb after Stuart Avis broke a string in an Interstellar Overdrive moment of pure Pink Floyd. Comfortably Numb was a bit ragged but played with real affection and enthusiasm and Andy Bay delivered yet another stunning solo, not quite in the Dave Gilmour range but certainly very fine indeed, that bought the evening to a fitting close.

The gig was an unqualified success for all three bands with lots of positive feedback at the end. I’m sure the prog world will eventually sit up and take notice of this very fine band before long – remember, you read it here first, I predict big things for Servants of Science in the coming months, The Swan Song is available via Bandcamp and is very good indeed.

[Photos by Clive Hewes, used with many thanks.]