The capital welcomed us to its bustling bosom on a humid but cool enough to be pleasant day. After making a raid on a couple of CD shops, and satisfying our appetites on some rather scrumptious pizza, we headed off into Soho for a night of splendid music within the sultry confines of The Borderline. 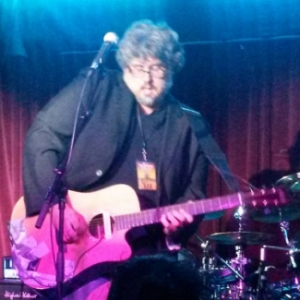 First up was King of Rushden Matt Stevens, who entertained us with his trademark guitar loops. All those mighty constructs of sound layers and rhythm came from a gaffa-taped to the max acoustic guitar, which on Matt’s bear-like frame looked far more vulnerable than it must have been, given the emotional and physical intensity wrought upon its slender frame.

With a short set that spanned his three solo albums to date, it is a wonder Matt didn’t break any strings as he squeezed out furious flurries of notes with facial expressions to match, on top of the looped rhythms and backing tracks.

As is always the case, the venue, which probably holds around 150 was only half full by the end of Matt’s set. I never understand why folk only turn up for the headliners, you never know what you might miss! 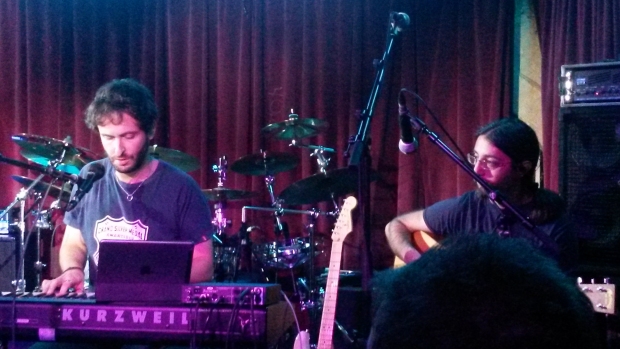 Next up was Nosound, well two of them at any rate. Giancarlo Erra, sat behind his keyboard and laptop, delivered a set of the band’s signature lovelorn melancholy, occasionally picking up a Fender Stratocaster to add the icing on the cake in the form of Gilmour-like solos. Aided by the acoustic rhythm guitar of Paolo Vigliarolo, the duo turned in an atmospheric set, and a highly appropriate scene-setter for Tim Bowness and friends.

The venue is now thankfully full. Billed as the “Frankenstein monster” as Tim put it, that is Tim Bowness & Henry Fool feat. Colin Edwin the band saunter on to the stage and launch into a triumphal version of The Warm Up Man Forever from Tim’s recent and rather good Abandoned Dancehall Dreams album. The band on stage tonight are most of the no-man live band minus Steve Bingham, with the addition on of Colin Edwin on bass guitar and reeds from Henry Fool’s Myke Clifford. 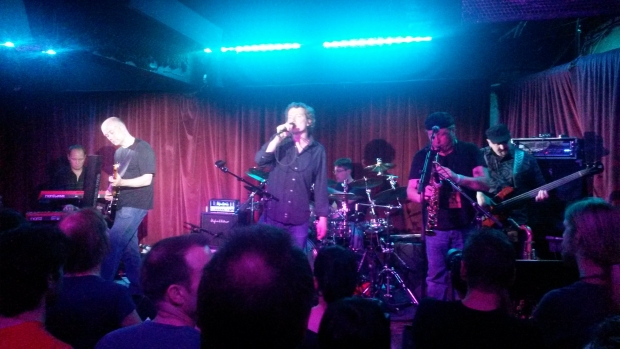 Tim Bowness, who admitted to covering his stage shyness in the past by strapping on a guitar and turning his back on the audience Miles Davis-style was not afforded that luxury tonight, being both the singer and front man, and an admirable job he did on both fronts. Stalking the small stage like a caged panther, Tim sang his songs of loneliness and regret with all the dark passion he could muster. The man is possessed of a subtly sardonic humour; introducing Housewives Hooked On Heroin with “And now for the least liked song from the least liked no-man album”, and “This song was described as having both the best title and of being the worst song of the week” back in 1996 when it was released as a single. “Thanks NME” said Tim, smiling knowingly. 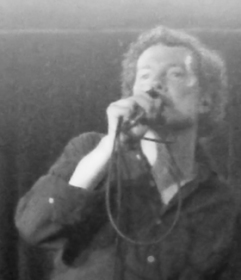 The opening lyric “Not even housewives hooked on heroin understand the awful mess I’m in” provoked nervous semi-shocked laughter at the sheer bleakness of the prose from one of a group of younger audience members, who seemed to have come in on spec. They seemed to be enjoying themselves apart from a couple in the group who spent a good five minutes having a loud conversation through one of the quieter numbers until silenced by the steely glares of more than a few of us! Let’s hope one or two converts to the cause were made.

The saga of Smiler was afforded centre stage; the tale of a woman caught in an unbroken circle of self-doubt and regret made all the more piquant with glimmers of unattainable hope. You probably couldn’t dance to it. First up was a storming version of Smiler At 50 which may rate as the best song Tim has written in my ‘umble opinion. The second part of the song where the music becomes an instrumental companion to the turmoil broiling away in Smiler’s head gives the band members, Myke in particular, the chance for a good blow. Scorching stuff it was, too! 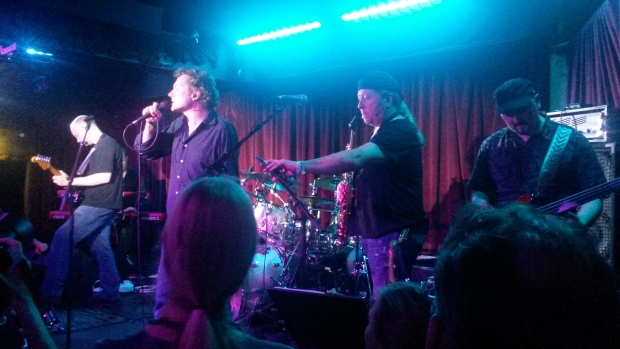 Continuing the rummaging about in the bottom drawer of Smiler’s psyche we visit a lyrically altered version of Judy On The Brink from the first Henry Fool album. This tune was adapted to become Smiler At 40, acting as a prequel to the two songs on ADD,and as Tim put it “heaping more misery” on this wretched character.

Other highlights included a fiercely intense version of no-man’s Time Travel In Texas and the sublime trip into loss that is Dancing For You, a song so finely and delicately wrought I was worried it may lose all nuance in a live setting. Even by Tim’s standards this song is a monstrously sad affair, though thankfully it survived the rock and the roll, and we loved it!

Tim has always had a good line in band introductions, and by the time he got round to that tonight he was as relaxed as I’ve seen him on a stage. You could still run more than a few lightbulbs off his palpable tension, but his cathartic songs need that edge. And so we had Michael Bearpark “Professor of Science and Guitar Pedals”, drummer Andrew Booker “An Old Carthusian and founder of the Bank of England”, and Colin “Smiler” Edwin. Unfortunately my addled synapses are not up to recalling any more!

There was always going to be an encore, and it kicked off with the lovely Poppy Q from the first Henry Fool album. By the time the last bars of the wistful and almost optimistic (steady on, there…) Songs Of Distant Summers has faded away we had all been treated to a fabulous evening of high quality musical entertainment. What must have been something of a logistical nightmare to organise went off faultlessly as far as this audient was concerned, congratulations all round!

Tim Bowness & Henry Fool featuring Colin Edwin
The Warm Up Man Forever
Time Travel In Texas
Smiler At 50
Judy On The Brink (Smiler At 40)
Almost The End Of Everything
Dancing For You
Housewives Hooked On Heroin
Mixtaped
Encore:
Poppy Q
Songs Of Distant Summers

My review of Abandoned Dancehall Dreams