As the tube station nearest to the venue was closed, we alighted five minutes up the road at Archway. Had we not, a rather fine Italian eaterie would have not been patronised by my trusty gig-going companion and yours truly. Suitably reinforced for the much anticipated evening’s entertainment, we eventually file in to the venue with the other ne’er do wells loitering about outside The Boston Music Room, which is fast becoming my favourite small London venue.

A real friendly place with surprisingly normal bar prices, and staff that treat you like a human being – Camden Underworld and its ilk take note – the room probably holds around two hundred when full, and for tonight’s show around half that number made up a reasonable sized crowd for a midweek gig.

The support was provided by Colin Edwin, who led a fifteen minute improvisation on his trusty fretless bass, the fine looking instrument being variously plucked, hit, and agitated via e-bow. Colin was joined firstly by Andrew Booker’s subtle and increasingly direct rhythms, his rim shots putting me in mind of Fracture, and later by guitarist Michael Bearpark. The trio hit a hypnotic groove that, as much down to Colin’s lack of frets than anything, was curiously Japan-like in places, and a good way to get in the mood for the main course. 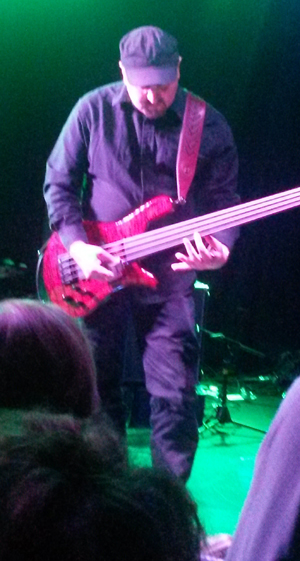 After a short break, Tim Bowness and band saunter on to the stage, and now Colin, Andrew, and Michael are joined by keyboard sculptor Stephen Bennett, and of course, Tim Bowness. Clad in blue jeans, casual jacket, and a Grateful Dead t-shirt, Tim belies his unassuming “geography teacher on a day off” look by injecting real passion into tonight’s performance, evident from the start with the rousing opening track The Great Electric Teenage Dream from his rather fine new album Stupid Things That Mean The World. Ending the song with a crouched leap from the singer, cued in by Colin, this was definitely the right number to kick off proceedings. “That was theatre”, said Tim of his minor bout of athleticism, his dry humour to the fore as ever.

Naturally focussing on his last two albums, which in the Bowness timescale arrived like two buses together after a long wait, the set was a neat encapsulation of the highly personal song world of our hero, including a few no-man favourites, and a song from Tim’s debut solo album My Hotel Year. It is hard to believe, but that strange record came out as far back as 2004. This varied cherry picking meant that the set became an electrically charged thing that developed a life of its own.

After a tumultuous and triumphant version of Time Travel In Texas shook the rafters bringing fear and loathing to N19, Tim steps up to the mike…“Following that, we will now play several slow songs about slow death”. Ha! One can well imagine Steven Wilson and Tim Bowness in no-man attempting to outdo each other with the aridity of their wit. In this envisaged scenario, Stephen Bennett brings levity with interjections of “Les Dawson piano playing” as he was credited with during the band’s previous gig in Bristol, according to Tim’s band intros! 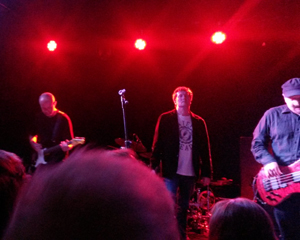 Always a highlight, Tim’s introductions are as entertaining as ever. Colin Edwin was only there because One Direction had split up, and Dr Michael Bearpark is now Professor Michael Bearpark, having gained said lofty qualification in theoretical science – quark, strangeness, and probably charm, too! Colin had already told us during the warm-up that “some bloke called Tim” would be singing for us. Andrew Booker’s intro I have forgotten, sorry Andrew!

One of the slow songs about slow death was the sublime Dancing For You, that is if highly poignant mental waltzes depicting sadness and loss quite unlike anything you’ll hear can be described as sublime. Me, I love it! 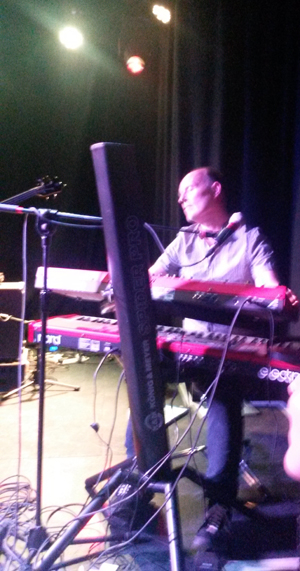 A searing version of Housewives Hooked On Heroin while having one of the most raw-nerved vocal hooklines in pop got the audience singing along, some no doubt with empathy.

The set closes with Smiler at 50, which is about as proggy as this unit get. The long instrumental coda dominated by Stephen’s swirling mellotronic synth chords and Andrew’s pounding drums is given an extra frisson of excitement when Tim leaves the stage, walks through the audience to the back of the hall and observes us alternating between glances over our shoulders with watching the remaining band members on the stage. A clever piece of stagecraft that neatly sums up the underlying tension in Tim’s highly personal and edgy songs.

After that dramatic conclusion it was only fitting that the encore should be the hymnal All The Blue Changes, whose lines “giving up on beautiful, making peace with strange” could well sum up the restless state of Tim’s muse.

As a unit this band lock together in their effortless groove like the highly skilled team that they are, and Colin Edwin, a relative newcomer to the no-man alumni, fits in like he’s been part of the furniture for years. I hope that Tim’s recent burst of creativity is maintained, with this fine band in tow for many albums to come.

Tim Bowness and band are not a rock band in the old fashioned sense, but they sure know how to rock nonetheless, as the aforementioned The Great Electric Teenage Dream and the evening’s other barnstormer, no-man’s Time Travel In Texas bears witness – oblique’n’roll, if you will. If you won’t, just try it out and see where it gets you.

Tim’s next gig is in front of 2000 people at a festival in Poland on Saturday 29th August, and his next UK date is at Band On The Wall in Manchester on 8th September. If you’re in the north of the UK you need to see this!