So here we go again, Solstice, live at A New Day Festival at the glorious Mount Ephraim Gardens in Faversham. This is becoming somewhat of a habit, one could almost call it a residency at this illustrious festival, having played three years in a row (Covid permitting…), with Andy Glass giving the appropriate thankful nod for the privilege to festival organiser Dave Rees. This time, their performance was later on the billing, so the field was full, yes, full…

The line-up today was ever so slightly different with Ebony Buckle and Jen Sanin covering the harmony vocals. I have to say, with the utmost respect to the three ladies who provided the excellent backing vocals throughout 2021, Ebony and Jen have taken the energy and harmonies to a higher level, bringing the stage alive with constant movement; infectious, one might say, reminiscent of the antics of those heady summer solstice gigs at Stonehenge in the early ’80s, and Jen even described their dancing as akin to an exorcism – a bit extreme, but one could see the analogy. Whichever way one wants to describe it, the crowd loved it, with many a punter commenting that it was their best festival performance yet. 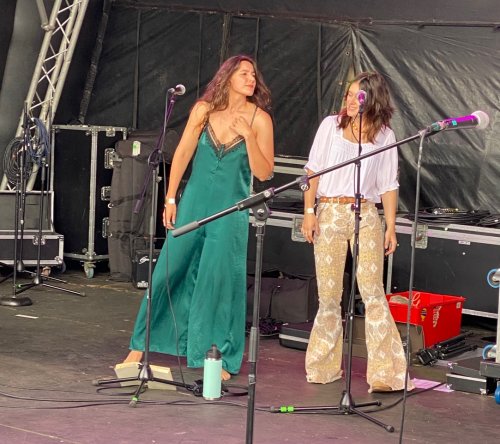 The bare-footed Jess Holland’s confidence develops with every gig. The show opened with the now familiar Shout, with the band taking their positions as the musical intro commenced; “Hello everyone, lovely to see you all here today”, as Jess welcomes us, and it was a lovely touch to see her taking the first impromptu words. Lots of prominent bass from Robin Phillips (more about that later), urgent backing vocals from Ebony and Jen, Steven McDaniel on fire with the Shout keyboard solo, and Andy Glass (guitars & vocals), Pete Hemsley (drums) and Jenny Newman (fiddle & vocals) clearly loving the role that they play. Is there a more energetic front of house singer than Jess? Never. 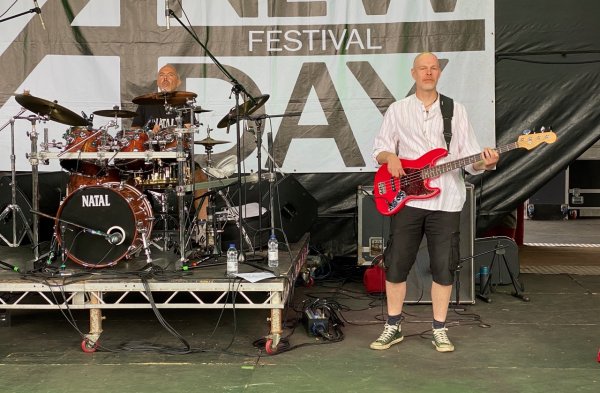 The set moved on to Siren Song, a new song that has had a few outings but yet to be consigned to an official release. There is a delightful fiddle intro by Jenny, beguiling chanting by the singers, a siren that is true to form. Common with all their performances, energy abounds, with Andy rightly taking centre stage at regular intervals. It’s a great song that has developed from studio musings and I can’t wait to hear the finished product. There were some sound issues in the field, with the keys not as prominent as they should be, difficulty with hearing the backing singers unless standing adjacent to the in-field sound desk and it was VERY bass heavy; thankfully, Robin was on point. It was noticeable that many punters were jostling for the best sounding place in the field to stand.

Andy introduced two new songs, the first being Light Up, which was very well received by the crowd. A real treat was seeing some superb acoustic guitar from Jess mid-track, and Jenny’s fiddle work demonstrated how skilled she really is. It’s a very ‘New Day’ style of song, contemporary, yet harking back to their roots of 1984’s Silent Dance and it leaves a very favourable impression of what is to come on the new album, hopefully to be released before the year is out. 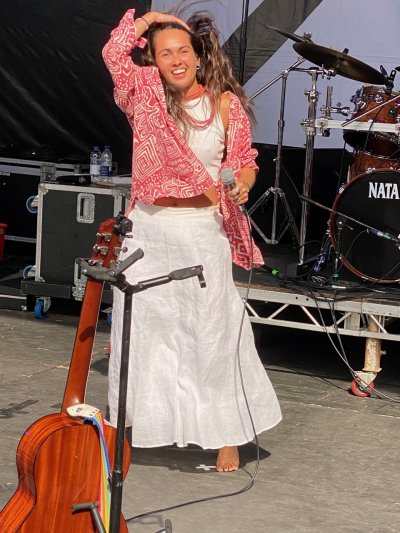 Bul Bul followed with a vocal intro from Jess and Andy playing a new instrument similar to a lap steel guitar. It’s a new sound that fits perfectly with the Solstice genre. The PA sound appeared to improve somewhat, Pete’s drums really shone and he was in command of the beat with the band gelling as a perfect whole. The tune gave way to Steven’s keyboard solo and a middle section that is signature Solstice with sweet vocals and a multi-section guitar solo to die for. The song finished with an uplifting key change in the last minute to round off what will surely be an enormous crowd pleaser in the future.

A New Day, surely the crowd favourite from the Sia album, and a ‘must have’ for this festival, rounds off the main set. It’s a beautiful song, with Andy and Jess on mutually supporting vocals, followed by Jenny’s fiddle and those almost immortal words “Stand and face the beauty of the day” and the reference to Silent Dance. Unfortunately, the PA sound did not do justice to this awesome band and Andy’s heart-rending guitar solo at the end of this track was lost in the noise, unless you were standing in the perfect sweet spot of the mid-field sound desk, with Loz Jackson (Solstice’s own sound engineer) doing his absolute best to weave his usual magic. Loz is a master of his craft and so there is no criticism of him, but it was just too loud… 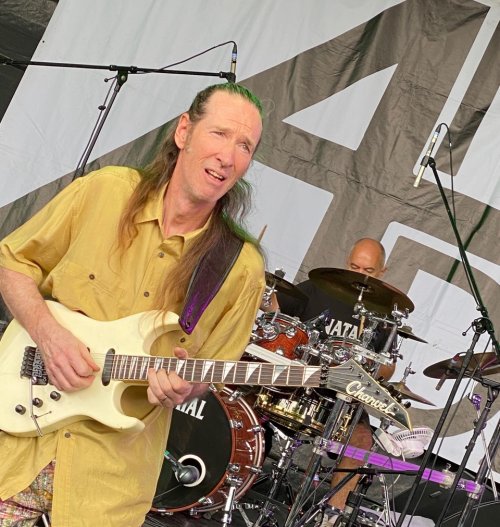 The set finished with Sacred Run as the encore, with lovely vocals from all the ladies, and I understand this is one of Jess’ favourite songs from the Solstice repertoire. Her lead vocals and chanting just get better and better, as she leaps from the stage to climb the crowd barriers to get close to her fans; it’s a supreme confidence and the band must be very proud of her.

This was another polished performance from Solstice. They are firmly into their groove and are attracting more and more followers. Their new album before the end of 2022 promises to be yet another treat for fans of Prog Folk and one can only hope that their run at A New Day Festival can continue.