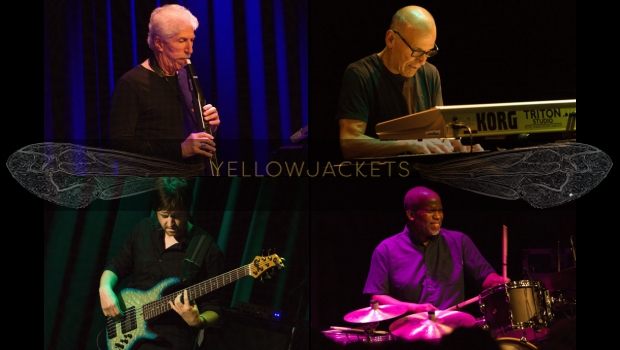 Yellowjackets guarantees top class fusion. The Americans, who have been active since the late-1970s, have built up an impressive oeuvre and track record when it comes to live performances. Unfortunately, the show, planned for two years ago, could not take place, for obvious reasons, but that changed at last and on a cold evening in April the band finally played in the Netherlands, at the Poppodium Boerderij in Zoetermeer.

The support act this evening is Wojtek Justyna-TreeOh! Quite a mouthful, but it turns out to be energetic funk/jazz of the highest order. A pleasant surprise, this ‘United Nations’ of fusion features a Polish guitarist, a German drummer, an Austrian bassist and a Portuguese percussionist. This sounds quite harmoniously, I must say. The Polish guitarist and his quartet, wearing a yellow beret, surprised those present with a short but intense set. His guitar playing is no doubt influenced by Carlos Santana, Larry Carlton, Allan Holdsworth and Eric Johnson, to name but a few. A surprising mix of styles and sounds, keep an eye on this ensemble. A shame about the complicated name, though Wojtek gave a useful tip (TreeOh!). In any case, the audience reacted enthusiastically and rewarded the musicians with huge applause.

The stage has to be converted for the US quartet, as a result the musicians of Yellowjackets do not take the stage until around half-past nine. 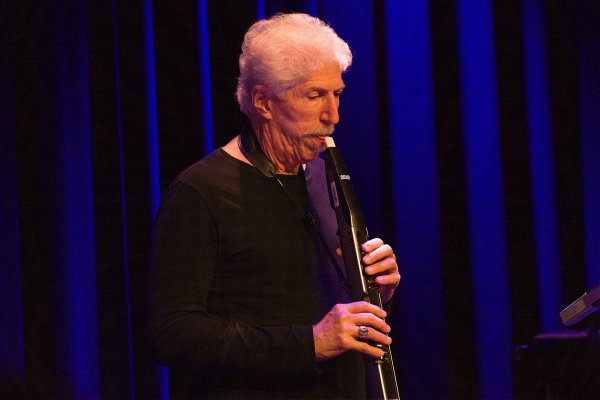 Man Facing North is the set opener, followed by Inevitable Outcome, for which Bob Mintzer uncovers his EWI, an electronic MIDI wind instrument. Both songs get a big round of applause from the audience. Three new songs from a yet to be released album follow: Early, a composition by bassist Dane Alderson, Intrigue (composer unknown) and Samaritan, which bears drummer Will Kennedy’s signature. Tenacity from 2011’s Timeline is followed by Dewey (For Miles), with another solo on the MIDI instrument. Fortunately, Mintzer also manages to find the keys and mouthpiece of his tenor sax, which he does on Greenhouse, from the 1991 album of the same name, and Even Song.

The well-known Claire’s Song, with swinging piano intro and interplay between bass and EWI, is the last song of the regular set. As an encore, unsurprisingly, the always swinging and gospel-tinged Revelation is selected, which dates back to 1986, Mintzer’s electronic instrument completely coming into its own.

Ringmaster Mintzer sums it up, somewhere halfway through the show: the band was formed 41 years ago, has released 22 albums and received 15 Grammy nominations, of which two were won. The veterans are now gray (Mintzer) and bald (Ferrante) respectively, but it didn’t seem to bother them at all. In that regard, the song Tenacity seems very appropriate for the band: sticking to their own musical vision is typical for these musicians. 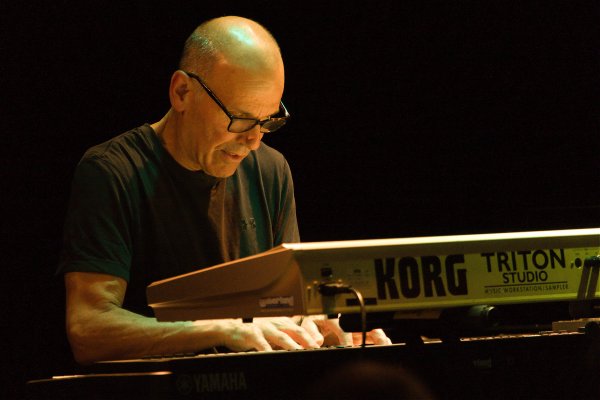 The grin never really leaves Russell Ferrante’s face. Just 70, not even an ounce of fat on his body, sublime piano playing, especially the improvisations are a joy to watch and listen to. The more he gets into playing, the bigger the grin it seems. The co-founder of Yellowjackets looks particularly in his element, finally being able to perform again.

Bob Mintzer, on the other hand, looks like an old man, while at 69 he is a year younger than his companion. Mintzer moves slowly, almost cautiously. He takes care of all the introductions, as always. Even if not all the songs are announced or introduced by him, you have to guess for yourself, or just know the band’s repertoire really well. He still raises the roof, especially on his trusty old Eastman tenor saxophone. He also uses the EWI on a number of occasions. I’m not a particular fan of this instrument, to be honest, the brass looks and sounds much better, but that’s just one man’s opinion. 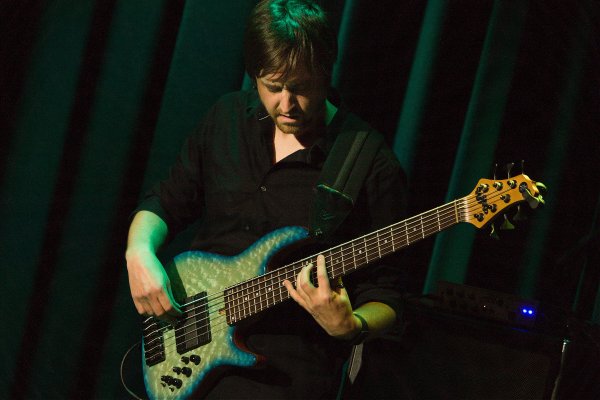 Dane Anderson has (only) been a member of the quartet since 2015, the young Australian has no trouble filling the large footsteps of predecessor Jimmy Haslip. Almost the entire performance he plays his six-string bass guitar, as if in a trance, playing it many times as a solo instrument.

But the real star of the evening for me is Will Kennedy; ‘William’ as Mintzer invariably calls him. I could hardly take my eyes off him, sitting behind his extremely low drum set up. Apparently someone once forbade him to set up his Pearl brand pots and pans more than 1 meter high. What a super drummer this man, getting on in age a bit, the gray hair is showing through, but he hasn’t lost any of his strength or sense of rhythm. 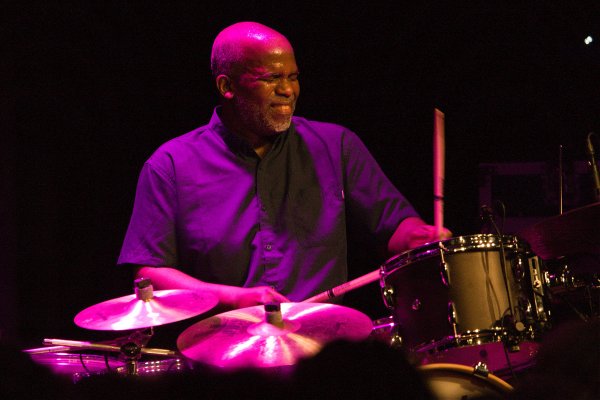 As usual there is, in true jazz spirit, much soloing and improvisation, the tracks merely serve as a framework. Despite all this display of virtuosity, the times when Ferrante’s keys and Mintzer’s saxophone play melodic lines in unison are my favourite moments.

Time and time again it strikes me how super excited the audience reacts to the Yellowjackets. The real connoisseurs like to get out of their comfy chair and from behind their favourite drinks to come and see the legendary band play live. Numerous standing ovations after yet another magnificent solo speaks volumes. Nevertheless, the gig wasn’t sold out, this was a show that had been planned two years ago, which now unfortunately had to take place on a Thursday night. That surely would have made a difference in terms of ticket sales. Sound and light were great again this evening, especially the subdued lighting deserves tribute: De Boerderij looked more like a jazz club than a rock theatre. The show ends around half past eleven, the band continues their tour with a number of gigs in Germany, among others, after which they return to their native country for another series of shows.

[Live photos by Richard Winkel of Poppodium Boerderij, used with many thanks.]