There’s nothing quite like a discussion about tribute bands – a concept that to all intents is a very modern phenomenon – it can get very prickly. The original band can still be on the scene but there is now a cheaper alternative for the soup in the basket circuit.

The best though are generally copying a now defunct outfit to re-live those halcyon days of yore, the very successful Bootleg Beatles come to mind.

The Musical Box are another. Taking their name from the opening track from Genesis’s Nursery Cryme album, five French Canadians formed this band in 1993 Quebec when bassist Sébestian Lamothe recruited like minded fans via local newspapers. Fast forward to 2018 and they are playing to world wide enthusiastic audiences as “A Genesis Extravaganza” which happens to coincide with what would have been a fiftieth anniversary if our heroes were still playing together.

Split into three acts, the first third is a compilation of instrumental parts from A Trick Of The Tail and Wind & Wuthering. The rousing …In That Quiet Earth shows us that Denis Gagné not only plays the Gabriel part but is also a multi-instrumentalist who on this piece plays that distinctive bass line. Elsewhere he crops up on second keyboards, percussion, and anything else that is needed to bring an original authenticity to the recordings that our memories are comparing this with. Los Endos brought the opening section to an end and initially there is a disjointed unease with the choice of listing.

Act 2 is called “Broadway Melodies” and is a selection from The Lamb Lies Down on Broadway album. Denis Gagné now dons a leather bomber jacket to become Rael. This group is the only Genesis copy cat that has been endorsed by the originals – Tony Banks even invited them to The Farm to study multi-track tapes – and the fact that on that night the merchandising stand was dominated by former Genesis tour manager Richard Macphail signing copies of his book underwrites this, and this second section had back projections of the slides used on that last Gabriel fronted tour. In The Cage was a highlight as the bass guitar pulse got clapped along with whilst the organ flourishes were cloned to perfection. Back In New York City‘s quirky rhythms are captured well but the slow Carpet Crawlers ends this part of the performance, letting the wind out of what has been a storming sail so far… 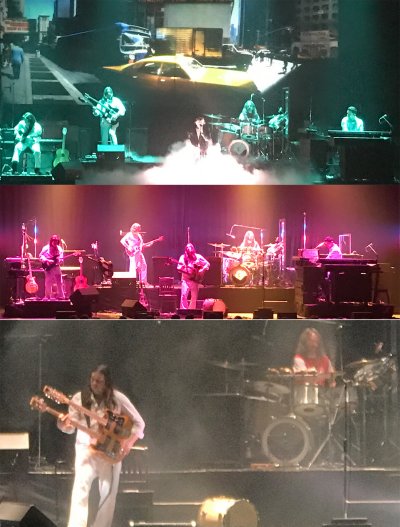 Post intermission and the dawn of the £6.00 pint ( 😲 ), Act 3, Before The Ordeal, starts with a short rendition of A Place To Call My Own which segues into Time Table. The audio mix appears to have improved, there is more spacial awareness and the drums are louder.

The price of admission is totally explained now as a superb Can Utility, After The Ordeal (a live first), and a Seconds Out worthy The Cinema Show had a gentleman shout out “THIS COULD BE GENESIS!”, as the familiar keyboard solo and funky 12-string chops coda out the interpretation of the Romeo and Juliet tragedy. Fair play, this was the pinnacle of this concert but expecting the Collins-era ending, it then morphed into the Aisles bit from Selling England. Oh Well.

Looking For Someone and Stagnation were just great whilst the surprise Dance On A Volcano encore and a faithful twin brother of The Musical Box finish what had ultimately been a very satisfying evening.

The sell out crowd of 50-somethings certainly found a tremendous gusto as the band bowed before them and slides of the proper band were displayed above them.

So is this “Tribute Band” worth spending your hard earned on? The stage was packed with equipment in order to reproduce what was in everyone’s head, even the bass pedal tone was modified to fit into each era. The playing was first class, the drummer was Collins-esque, and by the final section soul had crept into Gabriel’s doppelgänger… so yes it is.

The obvious comparison would be with Steve Hackett’s ‘Revisited’ versions with (let’s face it) only one original member left in that band and these ‘Quebeci’ troubadours have a flute… Neither are progressive in the sense of moving forward and it may rile critics to know that such a famous and large venue can sell out for a band playing someone else’s music, but look at the smiling faces, the warmth, and the tears. This is human nature proving that nostalgia can be what it used to be and, by the way, are not orchestras tribute bands for old composers?

SETLIST
Act:1 The Wind’s Tail
In That Quiet Earth
Robbery (solo ARP)
Mad Man Moon (Instrumental)
All In A Mouses Night (solo out)
Blood On The Rooftops
One For The Vine (Instrumental)
Entangled (Instrumental)
Los Endos
Act:2 Broadway Melodies
The Lamb Lies Down On Broadway
Fly On A Windshield/Broadway Melody
In The Cage
Grand Parade Of Lifeless Packaging
Back In New York City
Hairless Heart
Counting Out Time
The Carpet Crawlers
~ Intermision ~
Act:3 Before The Ordeal
A Place To Call My Own
Time Table
7 Stones/Fountain of Salmacis
Can Utility
After The Ordeal
Cinema Show – Aisle
Looking For Someone/Stagnation
Rappel
Dance On A Volcano
The Musical Box