The mighty Newcastle City Hall, once the domain for all measure of bands and a regular hunting ground for the avid concert goer, especially this one. Sadly, in more recent times the venue has been confined to variety shows, comedians and of course the tribute act. Now I’m not really one for tribute acts and being a prog fan, by nature, it would seriously limit me to a very narrow band of concerts indeed, however the purpose of this review is not to lambaste such shows, because, as the saying goes, ‘you pays yer money and takes yer chance’.

This is the third time, in a little over a decade, that I’ve taken my chance on Canadian Genesis tribute act, The Musical Box. I was mightily impressed with them the first time around with their faithful renditions of the early Genesis catalogue and in particular Selling England By The Pound.  A few years passed until I caught them again, on that occasion for The Lamb Lies Down On Broadway tour, and now Selling England… once again.

There are a number of excellent Genesis tributes touring currently, including the splendid U.K. based ReGenesis, however what sets The Musical Box aside from other shows is their keen eye for detail and the as faithful as possible reconstructions of said shows. Not just musically, but visually too, including replicas of the instrumentation, costumes, original stage sets and licensed slides. So in essence this is about as close as you are going to get to the original performances. 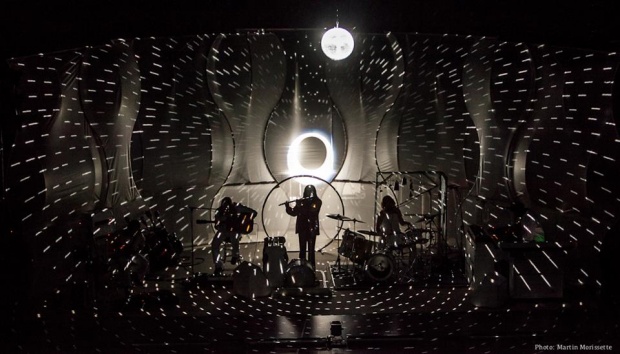 Vocalist Denis Gagné has certainly done his research and not only looks the part, but sounds it too. He also undertook Mr Gabriel’s somewhat bizarre introductory monologues, which was a nice touch. The other original member, musical director Sébastien Lamothe, takes on the difficult parts of Mike Rutherford, albeit left-handedly, whilst Guillaume Rivard, François Gagnon and Marc Laflamme take on the roles of Tony Banks, Steve Hackett and Phil Collins respectively.

I’m not going to comment on the songs themselves, as a glance at the set-list below will let you know all you need to know. Sadly the sound quality (upstairs) was pretty poor with the drums over loud, the guitars somewhat submerged in the mix and Denis Gagné vocals almost inaudible in the heavier sections. A shame – although the benevolent might suggest this was yet another authentic touch… ( 😉 )

As with previous concerts, it did take the band a few tracks before fully engaging with the audience, not sure why that is, as the audience were certainly with the band from the first few bars of Watcher of the Skies. Although not all and, although not particularly relevant, it did raise a smile. There were two couples sat in front of us who seemed somewhat overly animated during the early part of the concert, finally both ladies left shortly after the introduction to I Know What I Like – never to return. An aversion to lawn mowers perhaps? Or more likely finally being told that there were unlikely to be versions of Turn It On Again, Invisible Touch and I Can’t Dance…

The City Hall is still my venue of choice, however a couple of things worthy of mention. Firstly, the purchasing of the tickets. When I looked to buy, there were very few seats available (circa 12) and mainly towards the rear of the venue. Although not dissatisfied with the seats we eventually got, I was therefore expecting the concert to be sold-out! In reality two thirds of the balcony was empty. Why? And sadly – no photos of the evening as this was prohibited. Again, why?

Minor gripes aside this was an enjoyable evening and for those who perhaps missed the early Genesis period, then one of The Musical Box’s shows will certainly let you know what all the fuss was about.