From Reading, Tail Feather are a progressive psychedelic rock band with harmony vocals. They are rather good.

The ticket for this show at the Louisiana came bundled with a download of their Mother Nature EP, so let’s have a listen to that first…

Four tracks make up this EP. Alright, alright has a sound straight from San Francisco, psychedelic and yet rooted in the traditions of the late sixties. The vocals are not dissimilar to Jim Morrison and there’s great musicianship throughout from bass to distorted guitars. CarNation is Doors-like, but with a harder contemporary edge. The harmonies are nice and more of a hook than on the first track. It’s like a song out of time, but more towards indie rock than progressive. The centrepiece is Mother Nature, a strong song that holds close to their psychedelic blues style. They open with this in their live performance. Finally, Rain Dance closes the EP, a great little tune that benefits from listening to it loud.

Now to the live show, and as Tail Feather start their short set, the immediate response is how much more they are live than on their EP; twin guitars vie for space with a well-balanced bass sound, tight drumming, slick keyboards, and accompanying bongos. They are tight, there is an obvious onstage camaraderie and Mother Nature clocks in slightly longer than on the EP. If they suffer from anything at all, it is the low-ceilinged nature of the upstairs room of the Louisiana, which seems to lessen the dynamic of their sound. 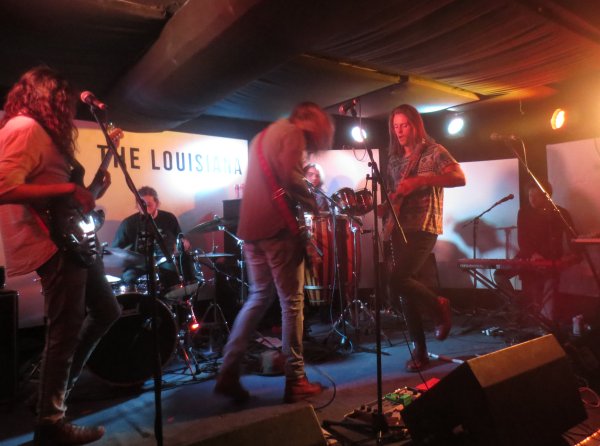 The conga drums and sax, played by Andy, enhance the Tail Feather sound, lifting it above the everyman prog that many British groups seem to favour. Spellbinder and CarNation shows the growing confidence in front of the small audience; a little early Floyd in the guitars, a touch of Hendrix and others that the 10-year-old me wasn’t as aware of as I am now. With so much rock history it is difficult for a band to find its own identity, but Tail Feather are getting there.

Three more tracks and feet have been found, the sax and keyboards demonstrating the depth and warmth they add to the music of this band. The guitars and drums are really good, but in terms of creating that sought after identity, these elements may be the place to move forward. I like what I hear and the toes do tap. There is even a hint of sway as their sound fills the upstairs room. Their strength is in the musicianship, close harmonies working well giving a slight Californian vibe, and even within the confines of the Louisiana their sound is warm, and involving.

Space Travel is excellent, and I find myself wishing that it was on the EP. I find this by far to be the strongest piece from the whole set. I have enjoyed it all, but this does stand out. Simon informs me in an after set chat that it has been a single for them. The short but enjoyable set closes with Rain Dance. 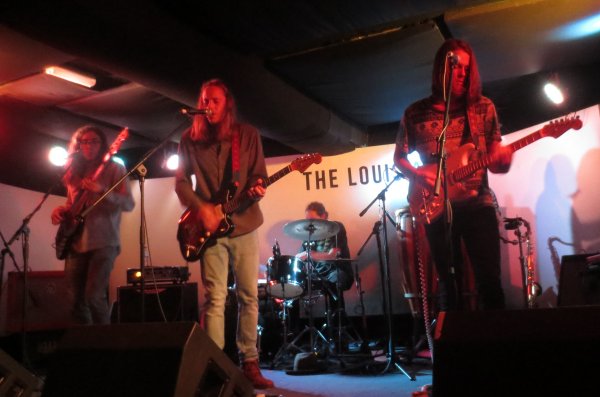 Tail Feather have something here, technically very good, but sometimes lacking that ‘extra’ that puts them above the others out there. They currently self-produce and do a very good job, but I would suggest that in the search for that distinct TF sound they work with a producer for a while, someone who will hear things that they do not. If it is within the realms of possibility, then they should retain their sax and conga player. He gives them a little of that edge they need to find.

Do I recommend that you look out for them, book them, or just give them a good listen? Wholeheartedly yes. Would I like to hear more as they develop? Yes. Give them a go, I think there is more to come.