Having often railed against the ever expanding nostalgia industry…quick, exploit the silver surfers while their ears still function…the unfettered greed of which now climbs up another notch with that astonishingly expensive and superfluous £378 Pink Floyd box that will soon be gathering dust on the bowed shelves of those with more wallet than sense, I’ll now unashamedly take up the role of hypocrite as I slowly melt in the involuntary sauna otherwise known as the O2 Kentish Town Forum for a celebration of a 40 year-old album. At least the ticket was under £30! That album is Agents Of Fortune, the international breakthrough platter for New York once-occultist biker rockers Blue Öyster Cult, now being toured by Eric Bloom, Buck Dharma, and an occasionally appearing Albert Bouchard – three fifths of the original line up, a higher proportion than many other bands of the same era still functioning in an industry fixated on the youthful years of the Baby Boomers. 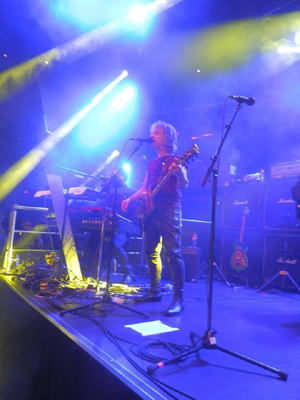 From our first come, first served seats up in the balcony the slightly understated beginning of the more relevant than ever side one, track one This Ain’t The Summer of Love, quickly fed off the energy of the packed and sweaty crowd and took off to the rafters where the gig then remained, in a two hour-plus evening of two sets divided by a mere fifteen minute break. From our lofty position we could see the tousle haired Albert Bouchard behind Richie Castellano’s amp stack, contributing percussion and harmony vocals. Albert emerged into the spotlight for his song The Revenge Of Vera Gemini, penned with Patti Smith, whose recorded spoken-word intro echoed spookily across the venue. The highly entertaining Bouchard in his rock star threads replete with obligatory leather trousers remained on stage for the rest of the Agents Of Fortune set, and in the second half re-emerged on stage for the “5 Guitars” face off at the end of ME 262, where he remained until the end. Occasionally missing his cues and having to be directed by a gesticulating Eric Bloom, or physically pointed in the right direction by a roadie, Bouchard lent the evening the required shot of good old rock’n’roll chaos to counter the well-honed slickness of the rest of the band.

The instantly recognisable intro to (Don’t Fear) The Reaper lifted the roof off the venue, and no doubt it would have helped if it was literally rather than metaphorically, as the increasingly jungle-like atmosphere continued to rise up the thermometer to reach steamily fetid levels in the second half. When asked why there was no aircon, a staff member shrugged and said “It’s an old cinema, innit?”, as if that somehow precludes the addition of some basic comfort. More like “It’s all abaht the bottom line, innit?”, methinks. 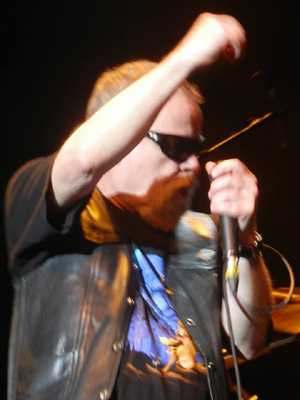 Agents Of Fortune is a classic rock album from a classic era and its 45 or so minutes flew by as the band delivered it with style and pizzazz. After a much needed break in which a tiny £4 bottle of water was quaffed in mere seconds…I actually debated getting a second to pour over my head…we returned to find our original seats taken so we retreated to the standing gallery right at the top of the venue, where the laws of physics determined that the heat and humidity levels reached new boilerhouse levels. All I can say is I was glad the gig did not take place the week beforehand when the outside temperature was a good ten degrees centigrade warmer! Some poor bloke fainted in the heat, a stifling environment where merely shuffling from one foot to the other let loose a river down my back. This getting old lark is all fun, eh? Anyway, the band played on, opening the “Hits” set with a tasty rendition of Dominance and Submission, a classic rifferama of a tune, and one of many early lyrics penned for the band by the very recently sadly departed Sandy Pearlman.

The second set contained the heavier material, drawn mostly from the pre-Agents Of Fortune years, and the driving beast of a rhythm section shone through on these more basic rockers. Bassist Kasim Sulton, best known for his tenure in Utopia, lays down a solid yet melodic rhythm to drummer Jules Radino’s uncluttered and powerful tub thumping. Lead guitarist Buck Dharma has lost none of his dexterity, and remains an underrated plank spanker of some class. Steering it all is Eric Bloom, ably abetted by the younger blood of Richie Castellano, who frequently swapped roles with Bloom, on keyboards or guitar. 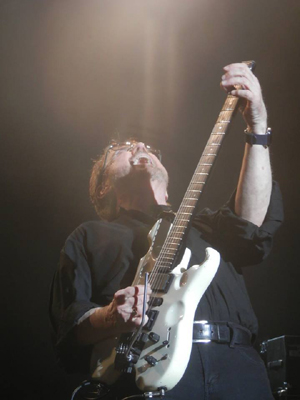 As the last album I bought by the band was 1978’s Spectres, after which they became huge and for me lost a lot of their mysterious appeal, there were a few songs I didn’t recognise, although Burnin’ For You was familiar enough. In the long snaking queue outside the venue before the gig I had been chatting to the couple directly in front of us, and said I hoped they would play Then Came The Last Days of May, and I was quite chuffed when it started, but for some reason they used it as a showboating exercise, turning the chilling metallic atmospherics of the song, previously best projected on the brilliant On Your Feet Or On Your Knees live album, into a six-string version of Duelling Banjos, completely shattering the black mirror of the original into a thousand shards, and then melting it off with a flamethrower for good measure. However, from there on in to the end of the set, Cultness was restored, and a barnstorming Born To Be Wild, with Bouchard on a wheeled-on second drum kit that he had to be shepherded to by a roadie, having wandered off in completely the wrong direction at the end of the previous number, ended proceedings with streamers shot over the chandeliers and exploding glitter bombs.

The desire to catch an earlier train merely 50% full of drunk people thereby avoiding the sticky messiness of the trains that leave after the witching hour, coupled with a desire to escape the hothouse atmosphere meant we missed the encore, during which I’m told Eric Bloom dedicated the gig and the tour to their former lyricist/producer/Svengali Sandy Pearlman, and to keyboard player Alan Lanier, a key part of the line-up who sadly left us in 2013, and also to recently departed ex-roadie and uber-fan Sam Judd.

Overall it was a highly enjoyable night, despite sweating out half my body weight!