So the burnin’ question on your lips must be, “Do we need another BÖC live album?” That was my first thought too, and the answer is “Yes, probably!”

I guess the first thing to say is the obvious really, but this release is only of interest to fans, rather than the casual listener. That said, there is much to enjoy here for fans of classic rock. The band’s catalogue really does contain myriad gems, including many relatively unknown songs, and this live set includes some of the less well-known ones alongside the must-play classics. For a gonzoid American metal band, they always had a degree of subtlety and an intelligence that set them apart, and a sense of humour that made their music far more acceptable than some of their contemporaries.

So let’s look at the plus side of our ledger and see why a fan might want to partake of this album. Well, the performance is top-notch. The band are well drilled and play what is required with panache. Stalwart stars Eric Bloom and Buck Dharma recruited great musicians for this incarnation of the band; Jules Radino on drums, Richie Castellano on guitar and keyboards, and Kasim Sulton on bass. They had been together long enough to become a tight unit by the time of this recording, and so the performance is spot on technically.

Of more interest to fans will be the setlist, which contains some nice surprises that make this album quite desirable for someone like me. These diamonds include a couple of songs from Spectres, the under-rated follow up to the breakthrough Agents of Fortune, namely Golden Age of Leather, and the sublime I Love the Night. I’ve always loved Golden Age of Leather, and its undercurrent of the camaraderie of the biker fraternity and the ‘death or glory’ attitude. It’s full of wonderful imagery, and I’m surprised they don’t play it more often. I Love the Night is a beautiful and atmospheric song from Roeser, every bit as good as Reaper in my book. We also get an unusual choice from Secret Treaties in Career of Evil, a typically dark BÖC rocker. The Vigil was the best song from the rather disappointing Mirrors, and is another very welcome inclusion with its slightly proggy structure and interesting twists. Perhaps most surprising is Shooting Shark which I never much rated, to be honest, but which is transformed here into a superb showcase, with Kasim Sulton excelling with his funky silky bassline driving the piece, and Roeser’s fluid lead guitar.

It must be said that Donald ’Buck Dharma’ Roeser must have needed hosing down after this show, so hot is his playing throughout the set. There is no better example than on the breathtakingly epic version of Then Came the Last Days of May, with an extended guitar work out mid-song which builds and builds relentlessly. If there was going to be a man of the match, it’s Roeser. However, Eric Bloom is a focal point out front, and he still puts in a commanding performance as main singer and frontman. He hams it up as well as ever on such favourites as Godzilla, Black Blade and Cities on Flame, and it’s hard to imagine the band carrying on without him quite frankly.

So there’s some reasons to want to hear this album, but there are a couple of drawbacks. The quality of the recording is fine and clear on the whole, although some parts sound a bit muffled, and the opener OD’d on Life Itself had me a little worried, and isn’t the best sound-wise. This issue crops up again here and there, but it’s not a major problem.

I’d also have to say that some of the versions of the older songs simply don’t have the raw excitement of the previous versions on their first live album, On Your Feet or On Your Knees, and such songs as ME262, Hot Rails to Hell and Buck’s Boogie suffer a bit from this. Finally on the negatives, Godzilla is too long! There’s nothing awful about the bass solo, drum solo and noodling from Roeser, it just goes on a bit! Mind you, when his noodling finally breaks into the intro to (Don’t Fear) The Reaper, the crowd go wild and all is forgiven.

So for me, on balance, this is a worthwhile and enjoyable recording of a superb and legendary band. Not their best, or the definitive line-up, but still a darn sight better than many bands can manage, and having seen them live a couple of times in recent years, I know they can still cut it live. So if you’re a big fan, check it out. The less committed might be content with their dog-eared copies of On Your Feet and Some Enchanted Evening, but they’ll be missing out on some gems. 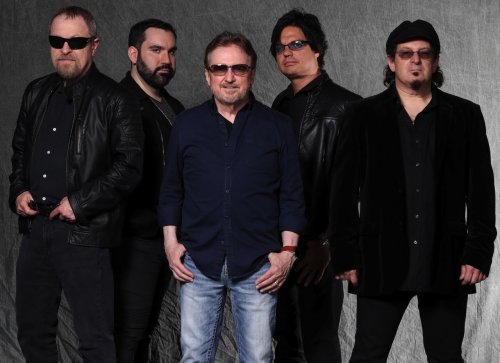