Tangerine Dream dazzled a packed Exeter Phoenix crowd on St. Patrick’s Day with a pulsing, mesmerising show. Originating in 1967 in Germany, Tangerine Dream came to prominence in the ’70s with a series of seminal electronic albums, including such classics as Atem (1973), Phaedra (1974), Rubycon (1975), Stratosfear (1976) and Force Majeure (1979), amongst others. Those albums were largely made by the most famous Edgar Froese / Peter Baumann / Chris Franke line-up. Sadly, the band’s leader and main man Edgar Froese died in 2015, but before he passed away he chose a successor to carry on the legacy of the band, Thorsten Quaeschning. The latest incarnation of the band is completed by Hoshiko Yamane, a member since 2011, and recent recruit Paul Frick. 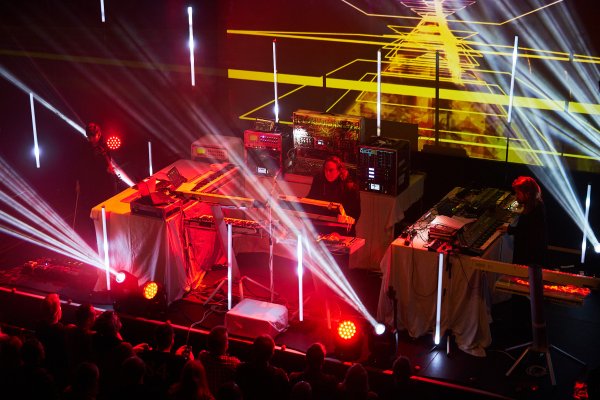 Tangerine Dream have continued to release albums throughout their career, including their latest 2022 album Raum (meaning ‘Space’). There still remains a connection to their earlier era as some of the music on the album was from Edgar Froese himself. Raum, somewhat remarkably, made it to Number 1 in the UK Dance charts earlier this month, which indicates the clear influence these pioneers have had on electronic dance music. From the new album, Continuum (which clearly has dance feel to it), You’re Always on Time and the epic title track Raum were all performed with hypnotic effect. There seems little point dissecting the setlist as the whole show flowed along almost seamlessly for two-and-a-half hours, with pieces merging into each other with trance-like impact. 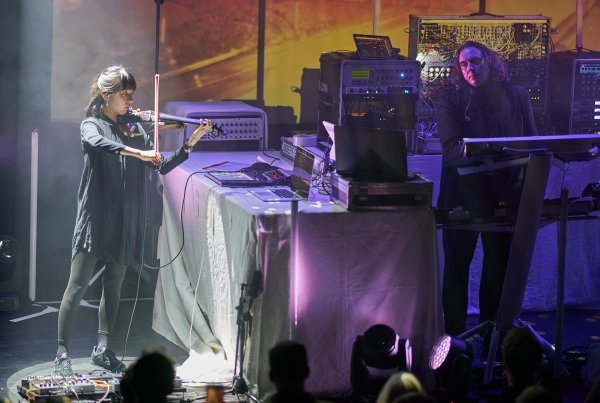 Tangerine Dream bookended their main set with two extended pieces from the classic ’70s era, Stratosfear and Phaedra, one of the first ever albums to use a sequencer. Commanding centre stage, surrounded by his phalanxes of keyboards and sequencers, Quaeschning was clearly leading proceedings like a modern day conductor with young Paul Frick equally busy on his own banks of equipment, and Hoshiko Yamane stage left. Yamane often drew the eye as she was the most physically active on stage, conjuring eerie and bewitching sounds from her electric violin. Visually, Tangerine Dream hypnotised the audience with fascinating lighting effects with an array of dazzling colours and at times intriguing projection images. In truth, the three performers are largely rather static so the lighting and video images are essential in helping to keep the crowd engaged. The combined effect of the waves of pulsating and ambient waves of sound with the imaginative use of flexible light displays is rather mesmeric.

This reviewer is not greatly familiar with the Tangerine Dream discography, but this did not matter one iota, as the show was startling in its intensity and beguiling to the senses. It was pleasing to hear two pieces drawn from rather different film soundtracks – firstly, the intense and dark Betrayal, the theme to William (The Exorcist) Friedkin’s 1977 cult film Sorcerer, based on the classic 1953 French film Wages of Fear. In contrast, the rather brighter and lighter Love on a Real Train was originally on the soundtrack of the 1983 Tom Cruise teen comedy Risky Business. 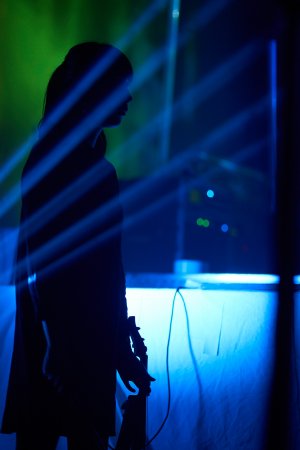 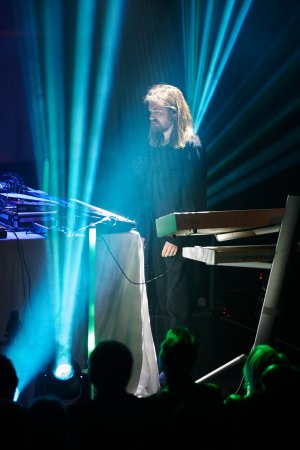 The evening finished in wonderful style with a completely new piece improvised on the night – Session 88 BPM / Am – in which Tangerine Dream extemporised around a chosen BPM rate. This was a gorgeously extended piece, led off by Yamane’s plaintive electric violin sounds, through which Quaeschning and Frick interweave sounds to magical effect. As it was St. Patrick’s Day, Quaeschning somehow also managed to mix in subtle samples of the unmistakable voice of The Pogues’ Shane MacGowan… now there’s something I did not ever imagine, Tangerine Dream and The Pogues together in a song!! Trust me, it worked brilliantly, and the packed crowd absolutely loved it.

This outstanding gig was an intoxicating mixture of at times trance-like rave with other sections feeling more reverently like a classical orchestral performance… just with electronic instruments. 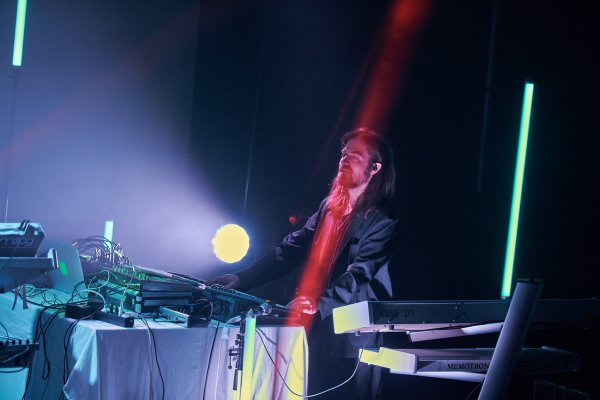 Before the gig I bumped into a friend in the bar and we discussed the phenomenon of bands continuing after their founding or ‘classic’ members are no longer active. We speculated which rock band might be the first to reach 100 years age?! Some Jazz bands, such as the Count Basie Orchestra, formed in 1935, are still going strong these days, long after the demise of their founder. On the other hand, some bands are so intrinsically tied up with the sound of their main vocalist it’s impossible to imagine those bands being able to continue with any degree of seriousness. Nevertheless, perhaps instrumental artists, such as Tangerine Dream, could more readily pass on the legacy, and could conceivably continue with a great deal of credibility.

On the strength of this great performance, and the strength of their new album, there does appear to be plenty of life left in Tangerine Dream for years to come. When they next tour, if they perform anywhere near you, do not hesitate in going along for a great evening – don’t even Dream of missing it! 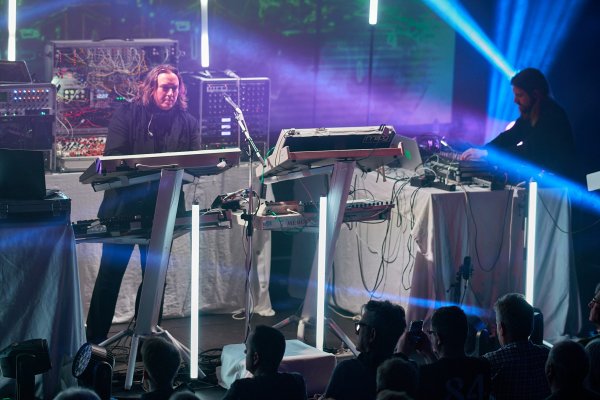 [The Progressive Aspect would like to thank Paul Giblin, who promoted this event on behalf of Exeter Phonic FM, for his help in gaining advantageous access to view this performance, and Pete Clemmons of Coventry Music Scene for his background information.]