Well, for a start the band would need to be on their ‘A’ game. The crowd has to be fully in tune with what the band are doing, supportive and properly up for it. The sound has to be excellent – that’s a given – but the material played also needs to have the capacity to draw you in and take you away to unexpected places. Oh, and it helps if the venue is unusual, slightly eccentric yet comfortable – like a well kitted out boat, for example.

Bingo! If this wasn’t the perfect gig then it was so tantalisingly close that it makes no difference.

Walking into the bowels of the Good Ship Thekla – for the first time in farrrrrr too long! – there was a definite buzz in the air, a significant crew of expectant pixies (both young and old) in attendance, drawn to this place in anticipation of phantasmagorical events… 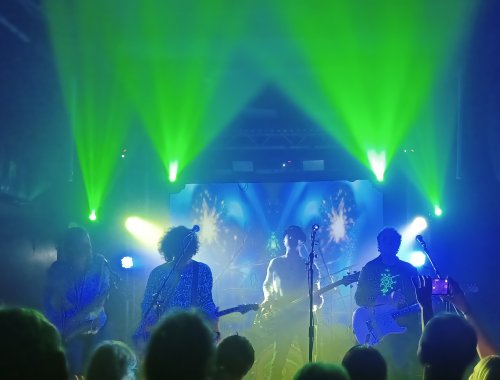 As charismatic frontman extraordinaire Kavus Torabi noted later on, amid the swirling sounds and whirling audients, this was all about being right here, right now; these people in this place listening to this funny music, in this very moment. Immediately from the opening notes, it became evident that this was going to be special. No support and a 7:30 start allowed the band to fully relax into doing their utmost to put on the best show they jolly well could – and they jolly well did! Opening with the full 20-minutes of Forever Reocurring, the opening journey into the deepest reaches of the cosmos from latest studio album The Universe Also Collapses, the scene was beautifully set, warming us gleeful space cadets into the dynamic zone we would be inhabiting for the next two-and-a-half hours.

This band has become a truly formidable unit, casting off any vestige of doubt resulting from the loss of founding father Daevid Allen and forging a path of their own, with the backing of the vast majority of the original Gong fanbase, and in fact pulling off that most difficult trick of gathering younger folk to worship at the alter, as if this were a ‘new’ band, many seemingly unaware of their long and often bizarre history. And that history was well displayed in a set peppered with classic tracks from the ’71 to ’74 period, drawing yelps of approval as the revered Camembert Electrique, Angel’s Egg and You albums all featured. Standing shoulder to shoulder with old favourites, the new material pulled no punches and measured up very well. 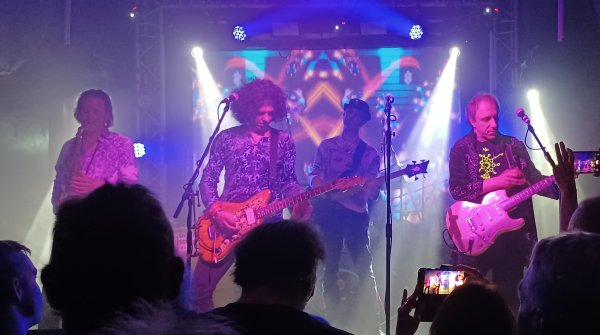 The audience was completely on message and all too happy to be cast adrift in the endless seas of space and time, Kavus urging us to use our combined energy to levitate the boat and turn it into a rocket ship, or sink it, or both, either option a conceivable reality. The sublime use of lights and projections coupled with a clear sound at a beautifully pitched volume made for a mesmerising and completely engaging experience – and an experience it indeed was. Having taken along my daughter and her partner, without much build up to what they might expect, I think it’s fair to say that they didn’t expect what they got!

This band is on fire at the moment, with top performances from all concerned. Special mention must go to Cheb Nettles who was simply stellar, pounding his kit and pulling off some quite outrageous fills with panache. Playing in a mask no doubt made it more wearing and he must have been a sweaty mass by the end of the set, but what a shift he put in, the powerhouse driving the rocket motors of this fabulously well-oiled machine into the stratosphere and beyond.

Kavus Torabi was made for his role as the wild-eyed master of ceremonies; a fantastic focal point and in fine voice, peeling off knotty guitar parts as if beamed in from another dimension. The serene presence of Dave Sturt and his immaculate fretless bass nailed down a slidy bottom end, while Fabio Golfetti’s pristine glissando and Ian East’s free-form sax added fascinating depth to the pumping wall of trance sound. Each extraordinary in their own ways, and each worthy of your full attention, as a group they are beyond compare – and clearly loving it, Kavus confirming that from the band’s perspective this was the best show of the tour so far. 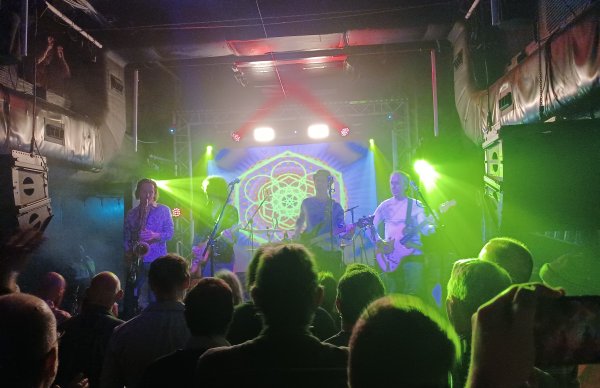 As the band leave the stage for a well-earned breather, Kavus informs us that we are about to receive “a message from our sponsors…”, the screen filling with a montage of images of band members past and present, the focus moving to Daevid Allen with spoken words from the great man himself. A nice touch and done with love and great respect; Allen will always be at the heart of all things Gong and I’m sure that wherever his spirit now resides he’s beaming with pride at what his proteges continue to achieve.

From an audience perspective, it was transcendental, with a full-on groove and much dancing throughout. Voices were raised in glorious unison for Rejoice!, and during Kavus’ heartfelt invocation that “Music is Magic” I felt tears rolling down my face. Music is the nearest I’ll ever get to religion, and the spiritual dimension shone through very brightly tonight.

As Kavus surveyed the blissed-out crowd at his feet, he remarked that this was exactly the reason why he joined a band in the first place. And this is also the reason why I will continue to attend and fully enjoy evenings like this for as long as humanly possible.

For those few hours the cares of the fucked up world outside faded from our thoughts, and upon emerging out of our cocoon of uplifting vibes onto the quayside, the world felt a better place. A completely life affirming show. 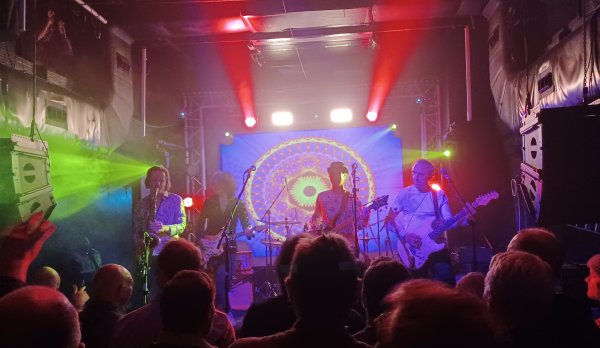