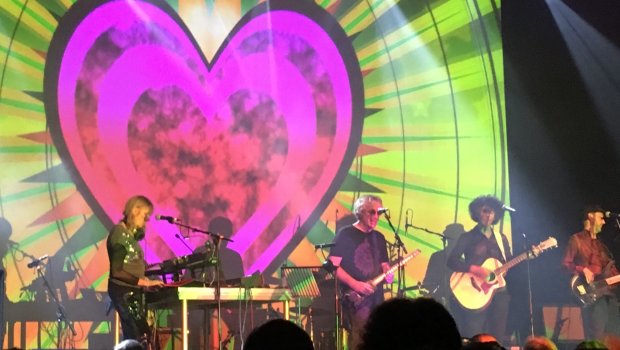 Nine and a half hours… Nine and a Half BLOODY Hours to get there!

Yep, such is my dedication to reviewing and gigging I spent an utterly Hellish day on Britain’s overcrowded and under-invested road network between Devon and Manchester in absolutely dreadful weather conditions… after all, it is an English Summer… to see the legendary Steve Hillage. Alright, there may have been the small matter of picking my son up from University, but it was still a bloody awful journey. Did I mention the journey? It was BLOODY AWFUL!

I’m not even that familiar with Steve Hillage, to be quite honest. Of course, I had heard of him vaguely, but until very recently I hadn’t really explored his music. My son was at a post-exam party so I bought a Hillage ticket out of curiosity to avoid a depressing night alone in a Travelodge bedroom. Frankly, after a truly gruelling drive, which took more time than it takes to fly across the Atlantic Ocean, the idea of just lying on a hotel bed doing sod all did suddenly seem rather more attractive, but I heroically dragged my sorry arse out to the gig hoping it would feel worth it.

I got there shortly before Mr. Hillage commenced and I was more or less sober, which is more than could be said for a good proportion of the rather ‘refreshed’ audience. I was a little ‘spaced out’ with ‘Post-Motorway Stress Disorder’ but I was clearly not on quite the same planet as many in the audience. I did wonder whether it was going to be one of those days – would I stand there wondering what the f… I was doing there, sober amongst a tribe of the inebriated and/or potheads? 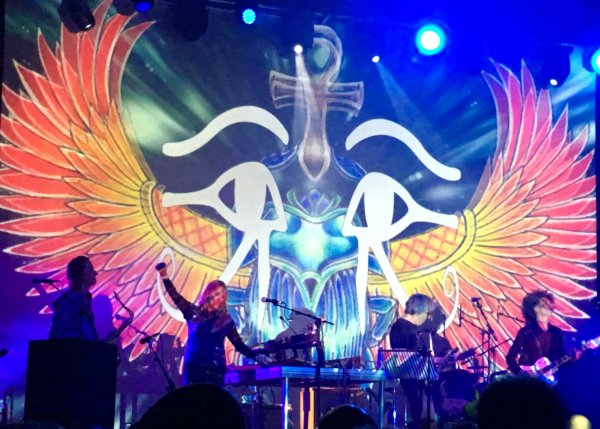 I need not have worried. Steve Hillage and his band, basically the magnificent Gong plus ‘Mrs Hillage’ (Miquette Giraudy) on keyboards, were totally fabulous. I will not pretend to know all the song titles, but some pre-gig research and acquisitions meant I was at least vaguely familiar with offerings drawn from the ’70s era Fish Rising, ‘L’, Motivation Radio and Green albums… but what was startling was that live in concert those songs all sounded so, SO much better! Steve Hillage seemed delighted with the reaction of a packed venue and early in the set he ignited proceedings with a blissfully psychedelic version of It’s All Too Much by The Beatles. The back projections were mind-blowing and matched perfectly to the transcendental music. Gong were totally in the groove and a little part of Manchester left behind all the incessant bloody rain and hopelessly congested f…ing traffic and Brexit Bollocks and Trump Nonsense and global warming worries and inane talentless Love Island crap and it went into orbit as we all sang “It’s All Too Much…” – it truly is sometimes.

Salmon did swim across the stage and we all boarded Ether Ships as Gong confidently and intuitively backed Hillage’s flights of fantasy. The gloriously vivid back projections helped transport us to Lunar Musick and Solar Musick realms as Hillage conjured a bewildering array of sounds and textures from his magical guitar. The atmosphere was throbbing with positivity in tune with the far-out Heart symbols etched upon our retinas, and joy was released with the unmistakable opening bars of Hurdy Gurdy Man chiming out across the venue for the main set to reach an ecstatic crescendo. 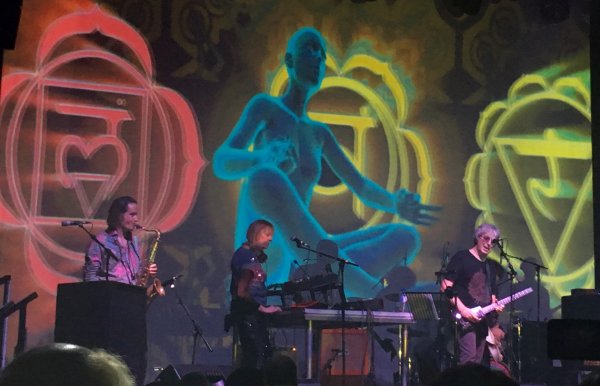 Steve and his band returned for the encore with a stomping version of Light in the Sky as ‘Mrs Hillage’ mischievously got the whole crowd to sing her comical lines: “Oh Me, Oh My, There’s a Light in the Sky.”

Singing is not a major facet in a Steve Hillage gig – he’s clearly a guitarist who sings a bit, but boy can he play guitar… and when you’ve got most of the crowd singing it really doesn’t matter. The vocals fitted the blissed out, celebratory atmosphere of the gig, and the crowd bellowed out that song with eccentric gusto.

Riffs of the Great Om variety resonated around the walls, and I think we may all have temporarily ascended onto another Astral Plain – it certainly did not feel like a rain-sodden Manchester. The psychedelic party finally faded away with… well, Buddy Holly’s Not Fade Away which concluded the experience joyously… but rather too quickly. We all had to descend back to normality as we stepped out into the relentless rain. I got utterly soaked as I somehow floated back to the hotel, but I simply did not care… what rain? What BLOODY Nine and a Half Hour drive!?!!

It’s been a decade since Steve Hillage last played his classic ‘70s material live – so news of three dates in Cambridge, Manchester and London this June caused a bit of a stir. Even better, his backing band was the current incarnation of Gong, fresh from releasing an album and performing a series of shows that have had pothead pixies dancing round their teapots in joy. Surely, this was a truly cosmic pairing.

Was Hillage ever going to live up to our excited expectations? He is, of course, a Prog God and it was an absolute delight to see him on stage again, but time has wearied us all and the years condemned. It would be foolish to expect him to still be in his prime while the rest of us are fatter, slower, greyer and prone to unexpected leakage. So his return at the age of 67 exposed some weaknesses as well as strengths. Let’s begin with the positives…

For a start, he can still play the guitar like a dervish, pulling out all the riffs and solos that we remember from the records. Sometimes his fingers flew around the fretboard like hummingbirds circling a plentiful source of sweet nectar – at others he dug deep into our bodies and vibrated our spleens with just one or two well-chosen notes from his Steinberger GL2T guitar. 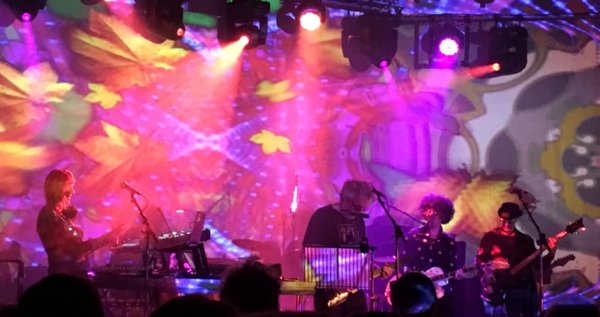 Most of the time his backing band of Kavus Torabi, Fabio Golfetti, Dave Sturt, Ian East and Cheb Nettles provided solid musical support. Nettles, in particular, was a powerhouse on the drums, navigating the challenging time signatures with ease and keeping up the energy levels. Sturt was a rock on bass, Kavus matched Hillage note for note with harmonic riffs, Fabio provided cosmic glissando and East’s saxophone contributions were tasteful and discreet. And, of course, there was Miquette Giraudy on synthesizer and space whispering.

We also got to hear the first live outing for Sea Nature and Ether Ships, the opening tracks on Hillage’s 1978 album Green, plus the Lunar and Solar Musick Suites, so both the sun and the moon went away satisfied.

But… Hillage’s voice. Now, it’s fair to say that he was never known for his singing, which even 40 years ago could most charitably be described as ‘enthusiastic’. However, it appears the years have condemned his vocal cords and at Cambridge Junction he hit the right notes about as frequently as Northern railway hit their punctuality targets. Kavus, Sturt and Fabio tried their best to help him but, unfortunately, they are no Pavarottis themselves.

Sometimes, Hillage pretty much gave up singing and just spoke the words, which made Motivation sound a bit like a musical TED talk. Trouble is, the vocals were too loud and in your face – had they been a little more buried in the mix they may not have felt like nails scraping down a blackboard. Thankfully, most of the audience decided to be charitable and opted for Zen-like acceptance – one I spoke to afterwards shrugged and said: “Well, you don’t go to a Hillage gig for his voice.”

There were also times when things felt a little ragged, a bit under-rehearsed. There was a dodgy moment of rhythmic confusion in Talking To The Sun, and between them Hillage and Kavus managed to quite royally bollox up the intro to Palm Trees (Love Guitar). I also noticed that Fabio occasionally appeared to have a worried look on his face as if he wasn’t entirely sure what was going to happen next. 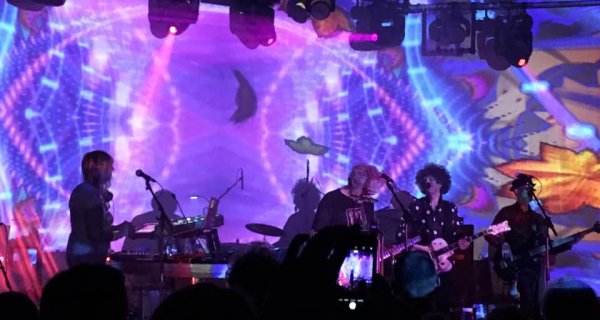 For all that, in the end it didn’t matter, none of it. Because when they came out for the first encore suddenly everything went up a gear. Light In The Sky was tight, greasy and stompy, the vocals were fine and everyone on stage seemed to get right into the groove. Then they stormed into the Master Builder version of The Great Om Riff and suddenly they were blowing the roof off the Junction and sending it into orbit around the Planet Gong. This is a tune the Gong guys clearly know so well and get such a kick out of performing that they were transmitting waves of joy to the audience. It was uplifting and powerful and beautiful and out of this world and so Gong.

To conclude: No-one can play guitar like Hillage and it was a privilege to see him. There’s not much he can do about his voice except pull back on the volume a bit and let it lose itself in the mix, we all know the words anyway. As far as the odd glitches are concerned, I’m sure that was a case of first night nerves and things will get (or did get, depending on when you are reading this) a bit more together on subsequent nights.

Sometimes the old has to give way to the new. There’s a young, vibrant Gong band ready to take over, let’s give them the same love we gave Steve Hillage.