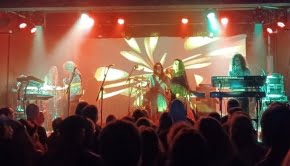 Thekla, Bristol Wednesday, 23rd March 2022 What would a perfect gig look like? Well, for a start the band would... Read More →

There’s something rather special about the fact that Gong still endure after the death of Daevid Allen, and the line-up... Read More →

It was 15 years ago, in November 2006, when the entire Gong family came together for a weekend of wonderful... Read More →

Shepherd’s Bush Empire, London 26th & 27th October, 2019 After a few years in the beautiful location of the LLeyn... Read More →

Released as part of this alternative rock band and musical institution’s 50th anniversary, Universal/Virgin send us this large box of... Read More →