After seeing Gong turn the Good Ship Thekla into a space vessel back in March, loosing its moorings to take us grinningly happy throng to the stars, the thought of a double-header with a rejuvenated full band Ozric Tentacles is an almost perfect combination, so here we are at the lovely Trinity in Bristol, strapped in and ready to go.

On this extensive trek the bands are splitting the headlining duties, Ozrics finishing the evening for the first eight or so dates, the baton being passed to Gong for the second half of the run. As this is still the first week of the tour the sold-out hall is treated to a full Gong set to warm the cockles on a cold night.

Gong have defied the odds to be better than ever before, and have clearly drawn in acolytes from outside the hippy realm, judging by the varied ages in attendance: many were clearly there during the band’s original era, while a good number were likely still in nappies at the turn of the Millennium. It’s a neat trick if you can pull it off and the current five-piece band have clearly managed to appeal to younger folk, making this very much not a nostalgia-fest for aging space cadets. 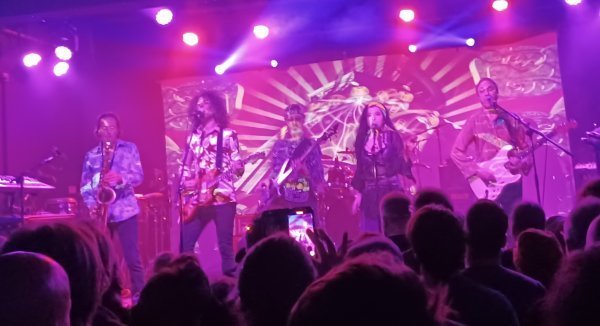 Kavus Torabi embodies what Gong are all about and leads from the front like a man who knows he’s not only fighting the good fight but winning hands down and against all odds, and that confidence spills over into a setlist which is almost completely composed of material from the post-Daevid Allen albums Rejoice! I’m Dead! and The Universe Also Collapses. There’s also some yet to be released new material in the form of the not tiny at all Tiny Galaxies, with only the classic Master Builder (from 1974’s You album) harking back to past glories, elevated by the presence of the Ozrics’ Saskia Maxwell, joining the band on stage to contribute vocals and flowing dance. And nobody cared a jot about the lack of other olden gems. This band have completely claimed the right to be whatever Gong they want to be, and from the extended introductory soundscapes and gliss of opener Forever Reoccurring they played an absolute blinder. 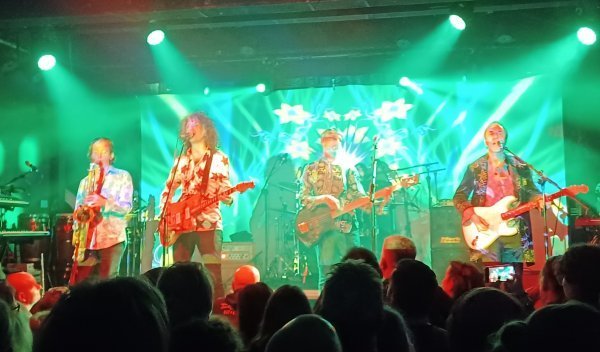 Accompanied by a startlingly impressive lights and screen show – which matched the clarity of the sound – and with Kavus as a suitably wild-eyed shaman, the band hammered through a set that didn’t let up for a moment, leaving many – myself included – with shit-eating grins that lasted all the way home. Absolutely marvellous, every member played their hearts out, with special mention to the always astounding Cheb Nettles behind the kit and the metronomic pulse of the band that is Dave Sturt’s fretless bass.

The crowd grooved on as the band scampered through their set, grabbing us by the throats with a velvety glove and giving us a lovely wet smack on the lips.

Just go and see them, yeah?

Phew, how can you top that?!

Well you don’t have to; just do something different equally as well.

It has been a while since the full Ozric Tentacles band experience toured the country, but this trip seems to be giving the legendary Ed Wynne and his troupe of merry funsters a new lease of life. With Ed’s son Silas on synths, former wife Brandi is back on bass, and this is what really lifts the sound above that which Ed and Silas had managed as the stripped down Ozric Tentacles Electronic of recent years, impressive as that was. A change of drummer a week or so before the tour must have led to a squeaky-bum moment, but Tim Wallander is spot-on all evening, nailing the parts as if he’d been playing them for years. The percussionist at the back was a little superfluous, his contribution only creeping through now and then to my ears, but this is a fine band in good form, and the quality of the back catalogue available to them speaks for itself. 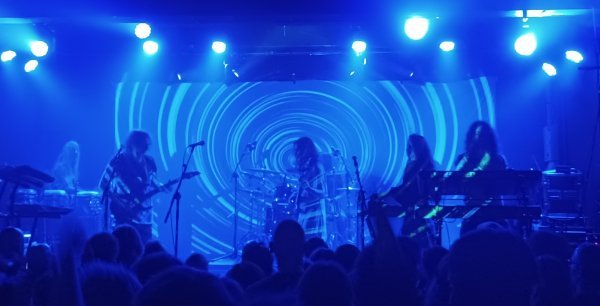 The sound was a little thin to start but this was rectified after a few numbers and the band benefitted from the visual spectacle as much as Gong had before them. As an audio-visual spectacle, it’s hard to beat it in a small venue, and it fits the driving pulse of the music – courtesy in large part of Brandi’s dextrous throb. Ed can step back a little in the full-band sound, but his guitar frequently hits the mark as only he can, and he remains the national treasure that the nation doesn’t know it has.

There were pieces from ages past and plenty of familiarity within a set the like of which only Ozrics can deliver, replete with whirling dancing from Saskia Maxwell, who also contributed sliding Eastern flute before joining Silas behind the synths. Ed was clearly in good spirits and enjoying playing to a packed house, frequently addressing the audience, as did Brandi who just couldn’t stop smiling all the way through the set.

As uplifting as ever, Ozrics did their thing in their inimitable fashion and the place went bananas en masse, young and old together in a grooving throng of luvved up loveliness. It’s an intoxicating spectacle and hopefully this tour will be the first of many in the future for the full band.

They could do no wrong but didn’t even attempt to be anything but the powerful swirly beast that they’ve always been, worthy headliners on the night, which is quite the statement after what we got from Gong.

The perfect double-header indeed. If you’ve ever had a penchant for either of these bands you need to see this tour.