It’s been 50 years since Daevid Allen started the psychedelic behemoth that is Gong, and as the band head into their 50th year, with a wonderful new album The Universe Also Collapses, and a revitalised line-up, the band shows no sign of stopping the momentum they’ve regained over the last three years.

Despite Allen’s death, there’s no stopping 21st Century Gong, with Kavus Torabi (Knifeworld/The Utopia Strong) being handpicked as Allen’s replacement, and, as we all know, Allen had great taste in guitarists.

I was really looking forward to this gig, as Gong blew me (and the majority of the audience) away at Eppyfest 2017 (when their soundcheck on a hot June afternoon nearly got the whole festival shut down before it started). Tonight, however, Gong weren’t the headline act (well they were, sort of – but more about that later!).

They came on at about 7:20 and proceeded to sonically remove the top of our heads, subtly rearrange our brains and after about an hour, leave us firmly planted on Planet Gong.

They played just over an hour, a five track set which was focused on the last two studio albums (the reason for which, again, will all become clear).

The last time I saw Kavus live in Bristol was with Knifeworld, when they played the Exchange to 40-odd people. It was so heartwarming and gratifying to see him rule that stage like the psychedelic rock God he was born to be. His vocals and guitar work are integral to the current Gong sound, and from the audience he looked like he was loving it. So were we Kavus, so were we!

The band are in fine form, with Kavus and Fabio Golfetti trading riffs, whilst Dave Sturt and Cheb Nettles are an absolutely brilliant rhythm section, at times Nettles is metronomic, building bit beats and sounds for Sturt to anchor down, whilst Kavus and Fabio’s guitars build into a mighty wall of sound, and then there was Ian East’s variety of instruments blending together, you really would think there’s more than five of them on stage.

Having grown up listening to early Gong, this current line-up are the embodiment of the spirit of Gong, whilst the new material is sublime and works so well in a live setting. You can see how confident this band are, and they have both the songs and the musical chops to continue representing the Gong legacy, heading off down new psychedelic avenues, building a new catalogue of songs that fit perfectly into the oeuvre.

Then after an hour, off they went, the lights went up, the stage was rejigged slightly, and then out came Gong again, with Steve Hillage and Miquette Giraudy. Yup, tonight Matthew, Gong are the Steve Hillage Band.

For another two and a bit hours we were treated to the best night of live music I’ve experienced this year. Hillage’s set was a crowd-pleaser, full of absolute bangers and a complete masterclass in taking your history and bringing it to life for an appreciative audience.

The covers, the Beatles’ It’s All Too Much and Donovan’s Hurdy Gurdy Man, were peerless in their approach and performance, and there was something rather magical about listening to the whole set with three guitarists, and the difference in styles between Hillage, Torabi and Golfetti. The way they played worked perfectly as a blend of sound. What impressed me about this gig was the sheer energy and verve that Gong had, from doing an hour on their own, and then coming back on to play the complex and intricate Steve Hillage numbers. They were like Duracell bunnies, still bouncing around the stage and brimming with energy, even after the second encore.

I immersed myself in Steve Hillage very recently (2018 to be precise when, flush, I bought the epic Madfish box that gathers together 20-odd discs of Hillage magic) and I do regret not having grown up with this music, but seeing him live, with that glorious guitar sound he gets, and the way he worked the band, more than made up for that. And, of course, his show would be nothing without the keyboard work of Miquette, who was an absolute joy to watch. She was so clearly enjoying the set, at one point having a wonderful solo-off with Ian East, and she is such an integral part to the Steve Hillage sound. 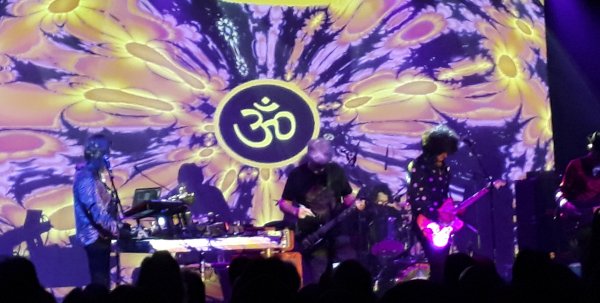 Choosing the current incarnation of Gong as their live band was inspired; other than Hillage, Kavus Torabi is the psychedelic guitarist of the age, and it does make sense cost-wise, but more than that, the current Gong incarnation obviously know and love the music, and the way they interacted with Hillage and Giraudy was a joy to behold. The 7-piece played their souls out for us, as they bounced from tracks like The Salmon Song to the driving Motivation, with room in the set for both the Solar Musick Suite and the Lunar Musick Suite, whilst if you wondered why Gong didn’t finish with Master Builder, all made sense when one of the first encores ended with The Glorious Om Riff, an absolute psych classic, and this live version was intense, immersive and absolutely brilliant.

The fact they did Man in the Sky as well, at the start of Encore 1, was brilliant, Miquette’s legendary “Óh me oh my, there’s a Man in the Sky” was lapped up by the adoring crowd. Even better was the fact that I thought the set would finish on The Glorious Om Riff, and we would head out into the night, but instead we got a second encore starting with Hello Dawn, followed by the Angel’s Egg classic I Never Glid Before.

This was an immense night of musical dexterity, full-on psychedelic sounds and sheer quality. Gong are an absolute blast to watch, with Kavus the ultimate rock God frontman, and the performance as the Steve Hillage band with Steve and Miquette was a masterclass, the band looked to be having a blast, Steve was on fire throughout the gig, and the chemistry between him and Miquette was wonderful to see. I am so glad I went out to see this gig, and feel my life is enriched and better for having been there.

If you get the opportunity, get yourself out to this line-up, the Gong/Steve Hillage Band performance is the best gig I have seen this year and is up there amongst the best gigs I have ever seen. 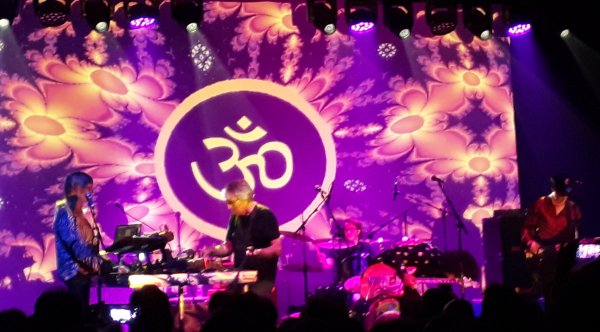