A warm but overcast (and a bit blowy) Thursday evening in Cardiff.

What better time and place for some top quality psychedelic loveliness?

A queue waiting for the doors to open is a good sign and it turns out to be a very large gathering of space cadets, ready to partake of the evening’s delights.

First up, Mr. Ed Wynne and his band. I was thrilled to see that Ed was supporting tonight, he has been making me smile – and groove – for thirty-odd years now, Ozric Tentacles a band that always gets my toes tapping whilst I grin like a Cheshire cat. With his first solo album Shimmer Into Nature recently released, Ed is out treading the boards with a four-piece band, including his son Silas on keyboards and ‘whooshiness’. With top quality bass and drums, this is Ozrics in another guise, and just as tasty, the perfect way to start the evening. 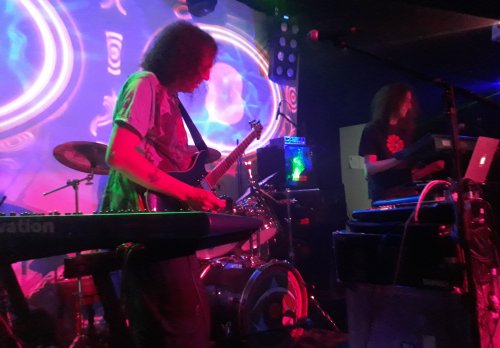 The set was short but not lacking in invention and interest. I’ve always found Ozrics to be one of those bands where the performance is the key rather than the set-list, and as a result they can just play whatever they like with no expectation. And so it was tonight, the stage was cramped but they played up a storm, with brilliant projections and lights playing across the full width of the stage behind them.

And what a lovely noise they made; the atmospheric interludes were opulent, the rhythm section nailed the headlong drives and Ed soared on his solos – mind-expandingly wonderful, as I knew it would be. Doubling on keys on occasion, Ed let fly with some splendid frenetic passages as the beats grew faster, culminating in a fine piece of typical Ozrics dub that got the crowd dancing.

As bonus treats go, Ed and his band put on a delicious dessert, even before we’d had a chance to sample the main course. 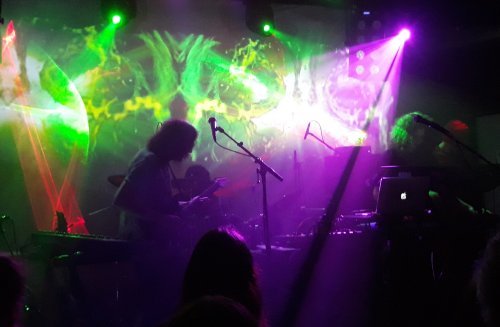 So to Gong, who have forged themselves anew, solving that tricky problem of having no founding members. Indeed, possibly even trickier, for a band with a history extending back over 50 years, none of those involved have been in the band for more than the last 10. Before his death in 2015, founder and talisman Daevid Allen expressed his wish that the band should carry on without him. And so they have, lovingly embraced by the fan-base and releasing two albums to date, the latest of which, The Universe Also Collapses, was released on 10th May.

And what an album it is; following on from the first post-Allen album, 2016’s Rejoice! I’m Dead, The Universe Also Collapses is a glittering burst of expertly presented psychedelia. 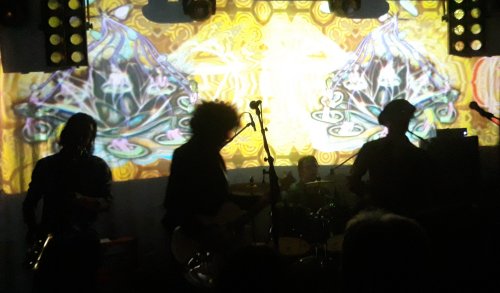 Now I’ve never seen Gong before, in any of their guises, but I’m more than familiar with Kavus Torabi, his work with Cardiacs and his own band Knifeworld (among many others) is always worth investigating. His guitar chops are exemplary and he exudes star quality. A great frontman, he completely ‘gets’ Gong, and based on tonight’s performance, this is probably the place where he excels the most (although he ain’t too shabby in any of his other projects). Daevid Allen was right to choose Kavus to front the continuing band, his legacy is in safe hands.

As it is with the rest of the band. Guitarist and Glissando Gourmet Fabio Golfetti has been in the Gong orbit for over a decade now, joining the band in 2012, Fretless Bass Maestro Dave Sturt, formerly of Jade Warrior, joined in 2009, Sax Supremo Ian East has been a member since 2010 and Drum Monster Cheb Nettles since 2014. Together they make a righteously uplifting noise, the lights and projections turning it into a magisterial performance that expanded the venue and the minds of those within it. 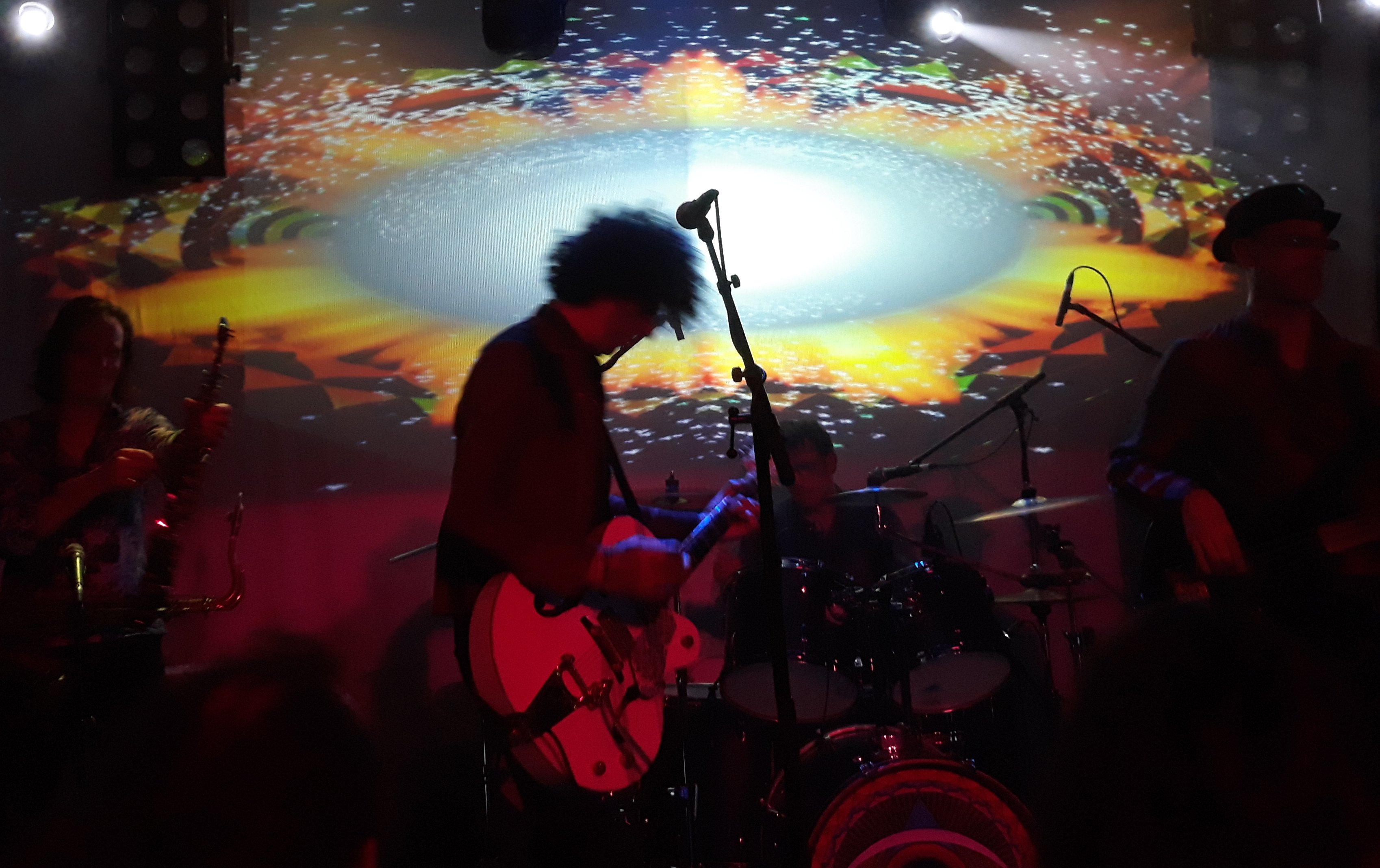 With a set culled largely from the two latest albums plus the classic Camembert Electrique from 1971, the band laid on a feast of musicianship and style, swept along on an uplifting wave of positivity. They rocked out, they set up swirling atmospherics, they gathered everyone together in a synergy of music. Seriously, this was special.

As Golfetti teased spacey sounds from his guitar, Torabi adding the intricate riffs, Dave Sturt was a revelation, a wonderful and sweeping precision performance. East blew up a storm, from squealing free-jazz to more soothing tones, with Nettles no doubt losing a good few pounds battering around his kit for the whole of the two-hour set in an, as always, sweaty Globe. He is really good.

The show started in fine form but turned into a celebration of community in the love of music, band and audience feeding off each other’s energy. As Kavus said, “if only the rest of the world could work like this…” 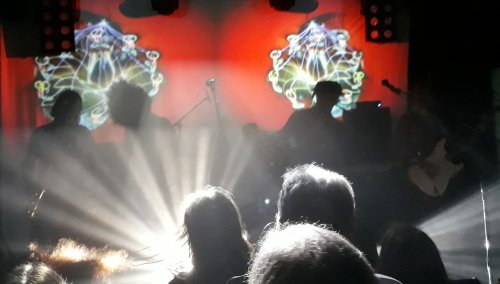 The songs build and Build and BUILD to extravagant and euphoric climaxes, they deploy trance and drones, encouraging the audience to join in, causing an almost hypnotic state with much dancing and swaying, accompanied by closed eyes or distant stares.

Music is the nearest thing I have to a religion, the sense of empowerment that can be produced when it is all done right can be extremely moving, and as the evening progressed, the band just got better and better, it genuinely became a spiritual experience.

Things changed; the Earth slipped off its axis, the walls of the Globe melted away and we spinning audients were swept off into space, whirling as we went, to the furthest depths of the unknown. And I’d only had a pint of Guinness – I can only imagine the outcome if you’re whacked out of your gourd. 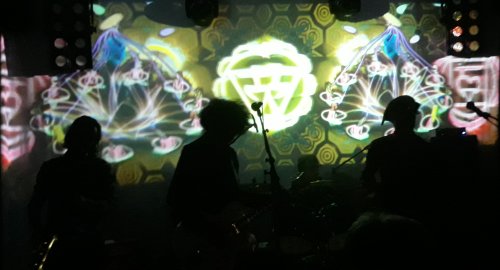 When the veil of otherness had dissipated, there was much cheering, much clapping and a warm fuzzy glow inside each and every one of us – band and audience. Stepping out of The Globe, we found ourselves, almost surprisingly, in Cardiff, but a better Cardiff where the sun always shines and people smile at each other a lot more.

It was Tuesday week, about tea-time, the Flying Teapot waiting to transport us home