On the eve of his tour in support of the recent Flowers at the Scene album, TPA’s Tony Colvill took the opportunity to have a chat with Tim Bowness about the album and his thoughts for the tour.

Hi Tim, Thank you for agreeing to answer some questions for TPA around your album, Flowers at the Scene, and the forthcoming tour.

I can make an assumption on the title of the album, but what is your reason for that title?

The title relates to the song of the same name on the album. There isn’t an overriding concept or unified theme running through the album, but the title immediately suggested a strong cover image to me, so that’s the one I went with for the whole collection.

The lyric chronicles the aftermath of a stabbing of a child in a park. It’s about the repercussions of senseless tragedy and how it affects family and friends. It’s trying to describe the painful reality behind an all too familiar two-line headline in a local newspaper.

The cover artwork, as well as evoking leaving flowers at the scene of a tragedy, depicts flowers in a more romantic or domestic fashion. The main image was deliberately ambiguous. It could represent old lovers happily reunited, parents at the funeral of their child, an expression of gratitude between friends, etc.

The tracks are very varied, and you have worked on them with a wide spectrum of musicians with no particular abode in terms of genre. How did the involvement of these artists arise?

I always choose musicians who I think can enhance the music and take it somewhere fresh. I never use guests for the sake of it. What I’m looking for is somebody who can fulfil my ideas for particular songs while also adding something a little different.

On this album, for the first time ever, I recorded a lot of different players performing the same parts on the same pieces. As an example, four different drummers, two bassists and two guitarists played on the title track and there are quite a number of unreleased variations of the song featuring different combinations of players.

This process was interesting in that it honed my ideas of what I wanted musically from my collaborators and also defined and questioned my tastes as I went along. 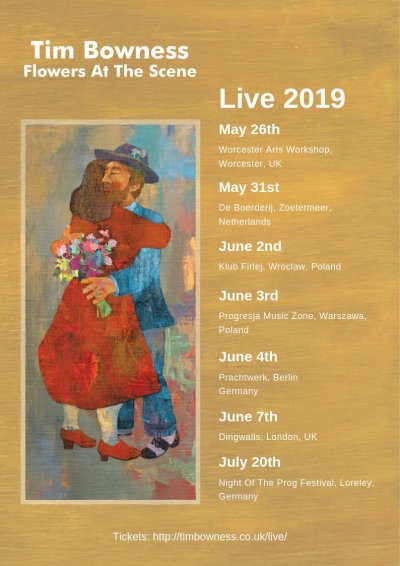 The tour supports the album, as they do. With such a broad range of musicians on the album, what can we expect from a “fixed” band on tour?

I never like to replicate the studio pieces in a live context as I don’t see the point. For me, every performance has to be unique. As such, I always work to the strengths of the live band I’m using and the material evolves as we perform it (partly as a response to audience reactions).

Can we expect any surprise guests on tour?

I’m hoping that each gig will be different and that some guests will join in on certain songs. At the moment, it’s looking like Andy Edwards will join us on a piece or two in Worcester and Ms Amy Birks will join in at Dingwalls.

You don’t seem to be restricted by style or genre, is that a deliberate attempt to break down boundaries? One of your contributors has notably crossed over to the “mainstream”, did you write with this in mind, or are you writing music you love, and acceptance is hopefully coincidental?

I always write things instinctively and with one exception – 2017’s Lost In The Ghost Light – I’ve never been conscious of the genre my music operates in.

With Lost In The Ghost Light, the ‘story’ (which was also meant as a homage to the golden age of the Rock album) specifically chronicled the career of a musician who’d emerged from the 1960s Underground Progressive scene. The music partially echoed the sort of music I imagined the protagonist of the album to have made over the years.

So, aside from Lost In The Ghost Light, I’ve always written what I feel and what I love regardless of genre.

What I do is crafted instinct. After the initial ‘feel-based’ writing process, ideas are refined and/or built upon.

In the early days of no-man, we were promoted by the mainstream media (Radio One sessions, Melody Maker Single of the Week, Esquire interviews, etc.) and we were signed to a fashionable label (One Little Indian). Our first single was the seven minute long multi-genre Days In The Trees, so even then Steven [Wilson] and I just wrote and released what excited us rather than what we thought might bring us success. I’m not sure we could write to order even if we wanted to!

I find a lot of artists producing progressive music in the current period seem, to my ears, to have borrowed and welded melodies and rhythms from earlier periods together, the music on Flowers At The Scene is refreshingly devoid of that, so has anything influenced the songs?

To an extent, the 2016/2017 recording of Plenty’s It Could Be Home (which comprised re-recordings of some of my earliest 1980s material) was the greatest influence on the making of Flowers At The Scene. Once that album had been completed, I continued to write with fellow member Brian Hulse as the process was so enjoyable. What we were coming up with was nothing like Plenty and nothing like Lost In The Ghost Light. We were both excited by it and it worked well with material I was writing elsewhere at around the same time (early to mid-2018).

As mentioned above, I write what I feel in real time, so there isn’t a sense of deliberately operating within a genre or deliberately evoking a bygone era. 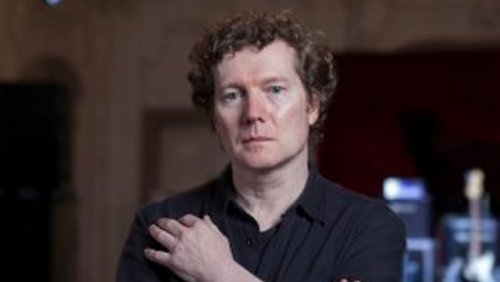 Do you think that the mainstream media that broadcasts music needs to change? The avenues for existing and new artists seem controlled by corporate policy and playlists (paid for allegedly), how do we break new artists?

Playlists seem to be the new payola.

The answer is a resounding ‘yes’ as regards whether things need to change. We have far more media (24-hour radio and TV stations, web resources, etc.) and yet, in a mainstream sense, there’s far less music being properly covered than there was on the likes of the weekly television shows, such as The Tube or The Old Grey Whistle Test.

The only positive growth area has been in specialist magazines such as Prog, Classic Pop and Electronic Sound. Though they’re meant to be genre specific, they have a broad remit which covers music of the past and the present.

Where do you see yourself if – heaven forbid – you need a pigeonhole?

I’ve no idea, to be honest. I just release what I personally enjoy and find exciting and hope that others get something out of it too.

I was always inspired by musicians who played with a diverse set of musical possibilities and genres (sometimes within the same album) while retaining their own strong identity. Artists such as Kate Bush, Peter Gabriel, David Bowie, Godley & Crème/10cc, Joni Mitchell, Frank Zappa and The Beatles are great inspirations with regard to that. I like a broad range of things, but I’ve never wanted to operate within the safety net of a particular genre.

Worcester and Dingwalls in the U.K., and several dates in Europe? Do you think we need more venues with flexible capacity in the U.K., with bands playing every other night or more mini-arenas that may not fill?

More venues with flexible capacity would certainly be useful.

Where would you like to play in the U.K.?

So many places (and so little time!). Playing in Scotland and Liverpool for the first time would be nice. Elsewhere, San Francisco, Chile and the Faroe Islands! 🙂

I understand the need for balance between always touring, and life in general, any thoughts?

I’ve never liked the idea of long tours. Playing live can be thrilling and can sometimes creatively feed into the music, but constant touring can be tedious on a personal level and sometimes detrimental to the music (eliminating interesting details in order to have more impact). Ultimately, I enjoy the process of writing and recording new music more than I do playing live. 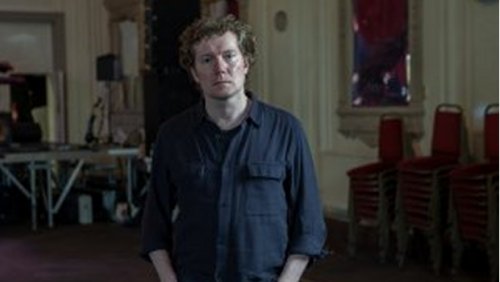 Musicians are fairly notorious in their focus, not really listening to their peers? Who are you listening to now or who do you rate? Or how do you relax?

I still love making and listening to music and it’s still a major part of my life.

My tastes are fairly eclectic and cover multiple genres and eras. Looking at my iTunes ‘most played’, over the last month I’ve been listening to anything from Santana to Warren Zevon, Underworld to Labi Siffre, Louis Armstrong’s Hot Fives to Swans, etc., etc. Inevitably, I also have long-term favourites that I regularly come back to and those include The Blue Nile, Pink Floyd, David Bowie, Kate Bush, John Martyn, Peter Gabriel, American Music Club, Joni Mitchell and Miles Davis.

In terms of contemporary artists, Eric Chenaux and Devon Welsh (both musically ambitious Canadian singer-songwriters) I rate very highly. As for the Progressive scene, I like Big Big Train and really admire their focus on unusual arrangements and melody.

I think you have at times a similar vocal style to Paddy McAloon (Prefab Sprout) and lyrically your words are on a par, what inspires your choice of subjects?

Again, beyond Lost In The Ghost Light, I’ve never gone into anything wanting to write about a specific topic.

I keep lyric and titles notebooks, but more often than not I write lyrics to my melodies (in order to preserve the integrity of the music). Phrases emerge and the song’s meaning becomes apparent after a while. From that point on, I attempt to craft what’s arisen into what I think it wants to be. If it makes sense, I’m serving the song rather than imposing myself upon it. That said, I’ve no doubt that aspects of my own life and preoccupations (or fears) make their way into what I write. Also, once I’ve worked out what the songs about that can lead to more refining/writing and sometimes tying other songs into a theme.

I’ve always loved writers like Philip Larkin, Jean Rhys and Harold Pinter who managed to convey a great deal of meaning using relatively simple and accessible language and that’s something I aspire to. The Liverpool poets of the 1960s were also an early inspiration with regards to this.

As for Paddy McAloon, I’m a huge fan of his work. I Trawl The Megahertz and Steve McQueen are particular favourites of mine.

First gig is Worcester on 26th May. Which do you prefer, small or larger venues?

Smaller, but probably something in-between is my ideal. Growing up, I loved venues local to me such as the Manchester Apollo and the Liverpool Bluecoat. Primarily, because they were comfortable and attractive venues that allowed the music to be heard clearly. I’ve always been one of those boring buggers that wanted to be immersed in the music, so sound is important to me. I don’t want to be bombarded by noise. When I was younger, I attended a lot of Jazz gigs (Eberhard Weber, Jan Garbarek, Ornette Coleman, John Surman and many others) partly because the attention to sonic detail was so much greater than it was at the average Rock gig.

When no-man last toured, I really enjoyed playing theatre style venues such as the Islington Town Hall and the Leamington Assembly.

Thank you Tim for answering our questions, it is a really good album that I have enjoyed listening to on my commute, from the relaxing to the foot tapping. I wish you every success with your tour and hope you shift huge amounts of merchandise.