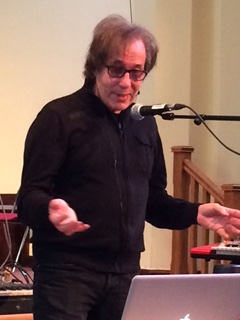 Richard Barbieri, late of Japan and Porcupine Tree, made a lunchtime appearance at the beautiful St.Paul’s concert hall at Huddersfield University which was billed as a recital and workshop. The expectation was of the unknown. Barbieri was last seen at the back of Mr Wilson’s backing band and collaborating with Steve Hogarth of Marillion but what is a ‘recital and workshop’?

There were plenty of people there to see. Students, who only had an hour between lectures, technos, who appeared more interested in synth types, and the Japanese. Or should that read Japan-ies (you know what I mean). I quickly began to think that I was the only Porky there.

St.Paul’s Hall is a church situated on the university campus which has been a concert venue for some time. As you would expect the acoustics were perfect and would be tested to the full by Barbieri. 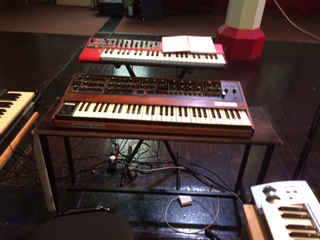 On entering the hall I was pleasantly surprised to find a number of synthesisers squared off on tables to the front of the stage against a backdrop of the original church organ. A mishmash of wires and plugs linked the keyboards. No spotlights, no banks of speakers, no support. Just a bloke who has made his way in popular music by twiddling knobs.

Richard arrived carrying a thermos flask of potion and reacted in surprise at the number of people in the hall. Beginning to ‘lecture’ from his note book, he looked just like you’d expect a university music lecturer to look. 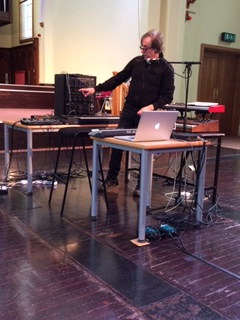 His intention, so he told us, was to play some new music which he would record. (He was to tell us later that he records everything he plays. Storage is not a problem but the disposal of unused material is!)

He then wound up the synths. ‘Winding up’ seems an almost clockwork statement but the equipment he was using, other than the Apple Mac, was ’70s and ’80s kit and sounded absolutely fantastic. Thus began a lunchtime feast of electronica.

It soon became apparent that Barbieri is no Emerson, Wakeman or Vangelis. In fact he places his fingers on the keys like a child at his second piano lesson. The admiration he receives does not come from keyboard dexterity, it comes from the sounds emanating from the speakers as a result of the constant twiddling, stroking, prodding and switching of the synth equipment. If not obvious to the audience, Barbieri tells us that he wanted to be part of the music scene but was not a musician. With the invention of the synthesiser he quickly recognised his ability to work with sound and texture without ‘playing 200 notes a second’. 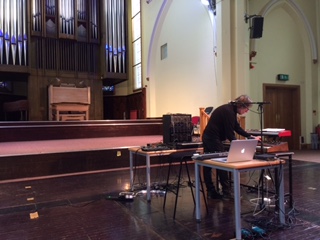 As if by a chef cooking our lunch, we were introduced to the ingredients. The Cystic 700, the Prophet 5 and the Noord. Each spoken about as one would about a child. The Cystic 700 gave Richard the ability to ‘sample and hold’ and the Prophet 5 maintained its warmth, still being used regularly by Richard today but by few others.

What appeared to give him almost as much enjoyment as the Prophet 5 with its ‘telephone switchboard’ was his five station loop machine which took his simple keyboard strokes and transponded them into non-keyboard sounds. What was circulating around the St. Paul’s Hall, thanks to the in-house sound system, was, at one point, a cross between Donna Summer and
Kraftwerk. By introducing sampled voices, in particular the weather forecast, we were almost up to date with Public Service Broadcasting! 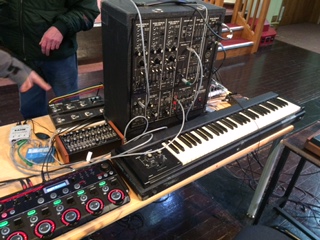 Barbieri shared with the audience his composing techniques, starting with a simple idea and letting the synths take it away. The way he built soundscapes by plugging and un-plugging, flicking off then on again and generally twiddling was fascinating. The students had to leave after an hour – something about lectures to attend! – which left the die-hards; the Japan People and the odd Porky.

Questions from the floor resulted in an admission that Mr Hogarth and he were working together again, and when questioned by the odd Porky about the remnants of PT making music together again he said he would not rule it out. The Japan-ies had their questions and so did the twiddly geeks.

It could have lasted for hours but the University Don brought proceedings to an end. A two-hour lunch for £3? One of the best I’ve ever had. Thanks to Richard and Huddersfield University for a wonderful event.