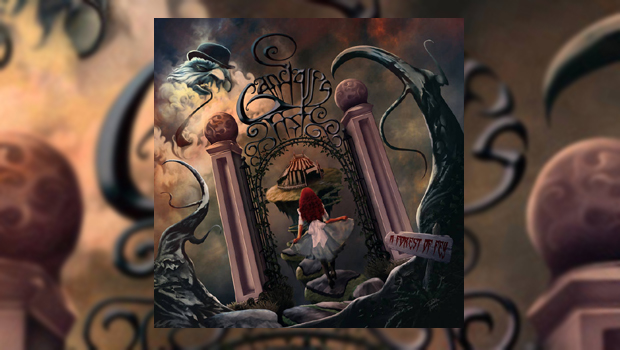 Gandalf’s Fist – A Forest of Fey

Now I admit to having a problem with the name of this band, although you can blame that on an association with Julian Clary’s “infamous” joke featuring Norman Lamont. But never mind, it wasn’t even a good joke. Gandalf’s Fist have been around a long time and this is their fifth full album. Now for those who loathe ‘Airey Faerie Nonsense’ – and I am not one – a little escapism does no harm, and most of these things are if you look beyond the veil, allegorical.

Multiple influences and spoken parts that add to the whole rather than being intrusive, if anything adding to a multi-layered atmosphere. Gandalf’s Fist are borrowers, in the best possible sense and taste. We have a myriad of artistes appearing in mirror notes on this album, that is not to say that GF have stolen from others, but as I said borrowed, taking genres and styles and making them their own; we have, or so I think I hear, Tull, Sabbath, Maiden, Hackett, Genesis, Gary Moore, and a smidgeon of Supertramp. These borrowings only highlight the talent that GF have in abundance, style and technique displayed to a very high standard. The guests that have been added to the core band probably go some way to explaining at least a few of the perceived influences. Troy Donockley (Nightwish); Matt Stevens (The Fierce & The Dead); John Mitchell (Lonely Robot).

Opening with a scene that seems to be from my childhood (and indeed the childhoods’ of many of you of a like age), Mother shouting for you not to get too far ahead, Childhood Ghosts, for the gentle intro that it is, still contains menace and drama. The nature of the beast is the way that the tracks segue, either through the music or a spoken passage, and through its gentle progressions we enter the forest realm of the Fey (Faerie folk to you and I) shades, an appropriate term, of Nightwish and Lacuna Coil that appeals to my darker self (‘Self’, not ‘elf, pay attention!). The vocal ranges are great, from a hoarse metallic growl to a Bon Jovi type of power ballad, whether lead or backing Melissa Hollick does a great job on the female side while Dean Marsh covers the majority of the male leads. It is actually quite difficult to break the component parts down in the songs, but then, in an album that is essentially a story, the question should be “why should you?”

The album comes with a nice booklet, even in the downloaded PDF format, with good artwork throughout the package (if you like this sort of thing, and I do). Skipping ahead, because you don’t want me to spoil all the fun, The Circus in the Clearing brings a sense of the macabre and a feeling of something slightly sinister. Like dark chocolate, a delightfully bitter taste; pass the port, Tarquin. A fairground organ introduction? I should never have watched Stephen King’s It before embarking on this review.

I recently downloaded their entire catalogue from Bandcamp on a whim at a very good price, and there are still good offers available on their back catalogue; I will venture into the forest to hear some more when time allows. Given the range of styles, I am surprised and pleased how tight the drumming is, so brownie points to Stefan Hepe (or is that one too many mythical creatures), an excellent drummer in my view. Dean Marsh has a great voice throughout (Luke Severn doing a fine job on track 5) and his guitar work, together with that of the guests, makes for a fine album. Everyone’s contribution makes for something good.
 
Forest Rose is Bon Jovi meets Jethro Tull, for menace my money is on Tull, with Melissa again providing a softer woman’s touch. It is an interestingly constructed piece in the way in which it changes direction but still flows smoothly.
The mixtures of light and shade throughout this album delights me. The words, well if you like fantasy fiction they are what they are. The stories that we are read in our childhoods are much older than we were led to believe, Jack & The Beanstalk having its roots in Sumerian storytelling, always with a little darkness to touch the soul (for the uninitiated Sumerian is about 4,000 years old or, for creationists, just about when the world began).

The Poison Tree, the closing piece, takes its words from poet and artist William Blake. I always loved Blake as a child, much to the surprise of my English teacher who believed I was a science fiction reading philistine. A dark ending to darkish album but yes, I’d buy it.

A Forest of Fey is GF’s 2014 Album, we would have reviewed it earlier but we got lost in the woods. 2016 and Gandalf’s Fist has just announced the pre-order for their next album, The Clockwork Fable. They are storytellers, balladeers and very clever musicians; concept albums are notorious love or hate beasts, this one is the former for me, these minstrels in the gallery have entertained me for a number of days and I will probably look out for The Clockwork Fable even though at this point a three CD concept album is quite daunting.

There is always a little room for a dark fairy tale in my life.