This was an evening for dispelling ‘Ghosts’. I say this for many a reason, all with little logic. The eighties were not my decade, musically I did not feel that involved. Japan were my sister’s band (and also my then unmet other half’s) so I was predisposed to not liking them, although I secretly had a slight admiration for the music they produced. In the spirit of exploration I agreed to attend this show, aware of Richard’s work with Porcupine Tree and having heard the odd bit of Rain Tree Crow, so not quite into the dark.

GRICE were up first, and Mrs C had noted the drum kit – not what she was expecting for a Barbieri gig. I’d checked out their prog credentials before-hand via a review by Sir Roger of Trenwith, so not completely blind. I cannot in all honesty pigeonhole GRICE, the sound is unique, and the performance grew as it progressed. Opening with first 12 Syllables and then Alexandrine, it was a slow opening. Perhaps I should not have been surprised given the ambient music and psychiatric narrative that preceded their appearance (and again during the interval). Not your usual four-piece, armed with Apples and a big Mac they were geared up for providing at least one of my five a day. 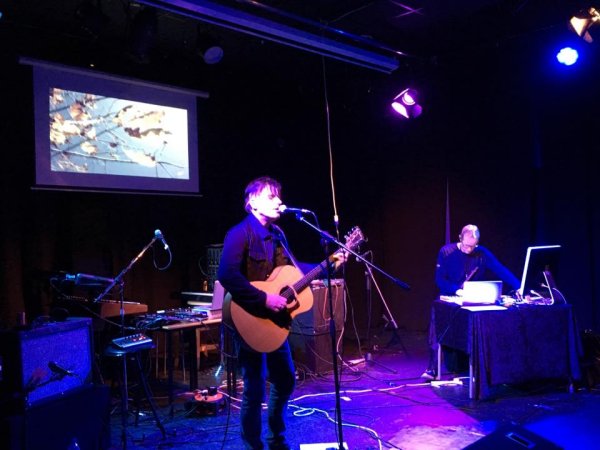 Change My World, and they certainly did, to a small audience (about 60) GRICE played as if the auditorium was full, with more tracks from their repertoire of album and EPs, including Propeller from where it all began with Grice Peters. A steady build of tempo, a couple of new songs. At times they were reminiscent of King Crimson, progressive with a vocal that resonated, words that spoke and blended with the music. Maybe it was because of the small audience that the music felt involving and intimate, but even without the presence of the main act I would venture to see GRICE again.

And so, the interval, the opportunity to see the merchandise, which when sold often pays for these tours, and get any dirt on GRICE. Merchandise stalls being a prime source for the inside track. Sadly, I must report, there is no grime on GRICE.

After a short break, during which all instrumentation other than the keys had exeunt stage left, Richard Barbieri took to the now sparse stage; keyboards, a few cabs and boxes, and a set reminiscent of a Thomas Dolby video from the ’80s. How much would ring a bell? Pavlov’s conditioning strikes again! 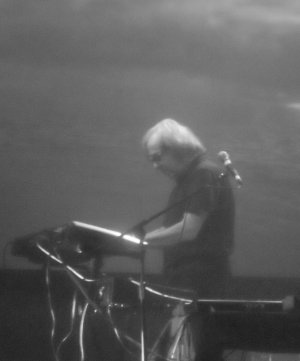 First up, from latest album Planets & Persona, Part 3 of Night of the Hunter in an improvised form and then straight into Solar Sea from the same source. Ambient chill would be my best description, and in no means derogatory, the loops, tweaks and buzzes filling the spaces in an under filled venue. From my vantage point it was fascinating, a variety of equipment, ancient (1979) and modern combining in an aural soundscape; Mr Barbieri shows why he is a major influence in the music industry, though I suspect too modest to take credit.

At this point in the tour, the stage should have been filled with more musicians, but circumstances have not allowed, as the ethereal sounds of Japan’s Ghosts grace the atmosphere. Post show, Richard describes to me how this piece is continuously evolving, to be enhanced by the addition of other instruments; Roger’s review of the Birmingham show (below) some 12 days later will perhaps reveal all. It is both nostalgic and timeless, containing sections of The Night Porter you can see that the art rock of Japan was nearly classical.

Interspersed with anecdotes and humour, the set moves on. A mixture of nostalgia, Experience of Swimming and material from the new album. The fact that all this music is being provided by one man and a series of boxes is wonderful. I observe the stage set like a pared down BBC Radiophonics Workshop, producing more that encapsulates my ears.

It ends, applause, and Richard returns to the stage. He tells us that it is the first time he has had an encore as a solo artist. The final piece is Porcupine Tree’s Idiot Prayer; I really should explore PT more. In the bar afterwards, eavesdropping, Richard is asked whether there will be more Porcupine Tree, and the cryptic (or not) reply is “if Stephen wants it”. Merch bought, a brief exchange of words with the artists, and the end of a lovely evening before an early rise for the journey to HRH Prog. As a sceptic/philistine, I am now a convert, my guilty respect for the band of my sister’s and my other half’s youth, at peace. The Ghosts have been laid to rest…until next time.

Birmingham is an odd place. Away from the very centre, the UK’s second city has the strangest of vibes, where it feels much like a ghost town as spirits echo through huge Victorian brick built edifices and arches preserved as temples to former industrial power and glory. During our twenty minute walk from the centre to the venue, once past the fairly central St. Phillip’s Cathedral we came across probably no more than five others out and about, and on the way back, no-one at all. If this was London, even on a Sunday, as this was, the streets wherever they were, would be teeming.

The venue was a cosy modern theatre with eighty seated spaces. This was the line up’s second gig of the day, having earlier performed an afternoon matinee, and I would guess this one was about 75% full.

Support was provided by the wonderfully involving art-pop of Grice Peters, aka simply GRICE, whose acoustic guitar was put through all manner of pedals and treatments, both by the main man and by “Captain many hands” Duncan Chave, who played an Eigenharp, which is a wind controlled midi device, as well as programming the sounds and controlling the visuals. The collage of sounds the duo created swirled around under Grice’s heartfelt vocals, creating the kind of post-modern angst that one associates with Tim Bowness, a comparison I have made before while reviewing Peters’ last album, the rather fine Alexandrine.

Much of the set was taken from that album and its predecessor Propeller, and occasionally the tunes would break free of the arty ambience with some strident chording from Grice, as on the powerful Highly Strung. A very interesting set, and I hope Grice gets to release more music soon, as he is a highly talented chap, although he did seem a little ill at ease in his role as a front man having to interact with the audience, which is quite understandable.

After a short interval, and my companion’s inevitable swoop on the merch desk, we re-enter the cosy auditorium for Richard Barbieri’s set, this short tour being in support of his rather lovely new album Planets + Persona. Richard was more than ably supported by Lisen Rylander Löve on all manner of electronica and percussive tinklery, in addition to her treated vocalisations and confident saxophone playing. Lisen was part of the now sadly defunct sound art sculptors Midaircondo, a Swedish duo and a name unknown to me before tonight’s gig, and having been thoroughly mesmerised by their final album IV, released in 2015, a name I intend to investigate further. Lisen comes into her own during a fabulous rendering of the Japan classic Ghosts, where she replaces David Sylvian’s vocals with her own electronically distorted voice and some visceral tenor saxophone blowing. 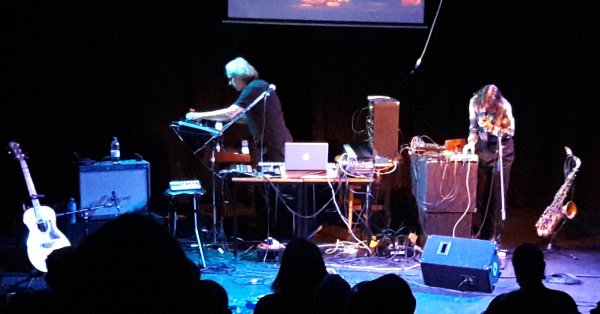 Watching Richard perform, his hands moving swiftly from keyboard to synthesiser controls, looping devices, to the inevitable Apple Mac laptop, and back to another keyboard was akin to watching a master puppeteer at work, his hands flying dexterously all around this esoteric equipment. I had not a clue what he was doing but the sounds and beats he was generating were quite mesmerising. Attempting to peer at us professorially over his glasses at the beginning of one song, he tells us jokingly that “I might be able to program a synthesiser, but I can’t raise my eyebrows”.

The wonderful 360° degree video to accompany Solar Sea from the new album was given an airing, but of course it loses something unless the viewer is able to manipulate it, as you would sat in front of a PC, or on your tablet. The tunes from Planets + Persona come alive in performance, sounding more organic and involving, especially when Lisen gets going on her saxophone, or shakes and rattles sundry handfuls of percussive flotsam. At one point she dropped one the Tibetan bells she was tapping, and the noise it made hitting the floor appeared to fit in seamlessly. It was all planned, natch!

Richard’s encore was a thrumming version of Porcupine Tree’s Idiot Prayer, presaged with someone describing an acid trip à la Voyage 34, which initially led me to think it was that track, but later research shows otherwise.

All in all, a thoroughly enjoyable Sunday evening, and if you ever get the chance to catch one of Richard’s or indeed GRICE’s shows, you won’t be disappointed. In the meantime there’s always Planets + Persona to sate your desire for intelligent non-snooze-inducing ambient music of high quality.

[And you can read Roger’s review of Planets + Persona HERE.]