Steve Hackett recently announced a major tour for next year which will celebrate the 40th Anniversary of Genesis’s Wind and Wuthering album. TPA’s John Wenlock-Smith caught up with Steve to get the low-down on this tour and other projects that is planning and working on at the moment, read on for more…

Good morning Steve, how are you?

So, what have you been up to recently?

I’ve been recording a new album at home. The living room is the home studio at the moment until we build another floor on the top of the house, council willing! There is a lot of building work going on in our street at the moment and the lady next door wants to extend hers too but it’s all about getting planning permission really.

You support her application and she supports yours then?

So this new album that will be out next year, what can you tell me about it?

Well, for a rock album it’s pretty multicultural. There are a number of people from different areas and a number of instruments from around the world that I’ve used as well. I like to think that it’s accessible as well as having things that don’t normally appear on rock albums, like the Peruvian Charango and the Arabian Oud. I’ve got a couple of people, one Israeli, one Palestinian, a guy from Hungary, a guy from Azerbaijan and a guy from Iceland, so it’s a bit of a United Nations! Flying in the face of the current political situation, which seems to be anti-foreigners, this is the antidote to being anti-foreigner.

That’s good, you’ve had world influences in your music for a long time and I think it’s good because people get to hear things they wouldn’t normally listen to.

Exactly, when I was a kid growing up listening to pop music I wasn’t ready for a number of things thrown at us by The Beatles. I thought how strange, but after a while you hear strange things from India and things like the one-stringed Chinese violin and things that sound blown from the Middle East. Then you begin to recognize them and want to work with them, so I’ve recorded a Koto myself and Chinese koto, so I’ve had my koto working!

It’s been wonderful, in a way I’ve been liberated and it explains a glossary of terms in a way. I don’t think that Rock should be routine, I’d like to think its shoulders are broad enough for people to take on these other things. There needs to be a natural orientation towards it, rather than thinking “what’s the most remote thing I possibly can?” and using it. I will only use something if it’s good.

Are there any lengthy songs on this album?

Yes, a few epics and who knows, once I’ve stuck it all together I will see what things can run concurrently and what things apparently seem to be one song. Don’t forget that Supper’s Ready was actually 7 songs put together to make one long epic. I quite like doing that, but for radio it’s not particularly great. I’ve had several DJ’s tell me that segue-ways are very difficult to work with for them.

DJ’s are never happy unless it’s a three minute pop song though.

I’m not going to start trying to do those. There is no point in limiting yourself to that or stuff that sounds like it’s from a soundtrack. I’m influenced by film stuff and other places where orchestras are used and many ethnic stuff, I’m open to all genres.

That’s good, I think you have to be listening to new music and open to new influences, it has payback for you.

When I was a kid there was a resistance to big band and jazz, but I’m different. As I get older I realise what these things can do, what they can bring to your music.

I’ve been listening to some jazz, Miles Davis. I wasn’t ready for it when I was younger but now I am. I still don’t understand it all but at least I enjoy it.

He did many things that were very different, seemed to reinvent jazz from album to album. When you listen to Black Beauty or Live Evil, that stuff where he goes completely atonal and yet manages to pull it off. Along the way playing with some stellar teams who are now bandleaders in their own right, people like John McLaughlin, Lester Young, all those keyboard players.

Yes, there just aren’t enough hours in the day and its maddening that I can’t record more quickly. I will record for a little bit, then I’ll listen to it and then think this is what’s wrong with it and then go back and revise a little bit. It’s like writing a book, a lot of rewriting, certainly it is with me. I will go back and do things again unless I get a truly spontaneous wonderful guitar bit then I won’t replace that, but most of the time I go on refining.

Talking of writing, your old sparring partner Mr (Phil) Collins has written his autobiography, have you get any plans to do that?

I’m working on one.

Really, that’s good! Are you going to do an audiobook as well? You’d better!

That’s a good idea, I gather he is reading his.

Well you have an easy voice to listen to, it’s not jagged or jarring.

Well thank you for that, no one has ever paid me that compliment before so maybe I should do that – a talking version.

They are very popular.

We have Audible and we play that all the time. I’ve heard Brian Blessed’s Absolute Pandemonium about 20 times but I always fall asleep before it finishes.

I bought your Blues with a Feeling album a few weeks ago and you told me ages ago that you started out playing harmonica but I didn’t realise how good you were at it.

Oh I’m glad you like the harmonica, it’s a passion but I’m not sure that a progressive audience will appreciate the greats who have influenced my style. I’ve been in the presence of two harmonica playing geniuses, both my father and indeed grandfather played and also Larry Adler. I went to one of Paul Butterfield’s gigs in 1968, Bloomfield was really the template for what I try to play on Blues With A Feeling. His heroes were Little Walter and Sonny Boy Williamson who is unequalled on acoustic harp. Yes, Larry Adler and even Tommy Riley, not names that come up much these days, but Larry Adler did get to work with George Martin and with a whole host of special singers. I remember him sitting at the piano playing Rhapsody in Blue (Gershwin) on the left hand and playing harp in his right, quite stunning when I saw it on TV and he was quite elderly at the time too! He was telling me how to get octaves on the harmonica.

So maybe you’ll think about another blues album, eh?

Get Mr Bonamassa along – he will help you out!

Bonamassa I think is great. He and I have spoken a couple of times. I think that of the current crop of young Blues players, he has the passion and the fire that I found in many people who became guitar heroes.

He is very prolific, a strong work ethic.

Who, me or Bonamassa?

Bonamassa, but you do too.

Yes, he’s a busy boy certainly, but wouldn’t it be great to make more albums every year? Sometimes I’ve done some that are rock and others that are acoustic or classical. I’ve been lucky enough to work with a great orchestra or two, I love it all basically!

You still have a fire and a passion for music, Steve.

That’s it, yes. Andreas Segovia was an influence on my early stuff and also the passion and fire of Paco de Lucia, stunning and with all those guys you go “How did you do that?” and you try and figure out a few things yourself.

I play the guitar badly and I watch what you do and think “If only”.

You know what, in the days when I could barely manage a couple of chords and maybe a third on a good day on my dad’s beat up old guitar with a vicious action, I got more pleasure out of very little, a cowboy tune or Dylan or Beatles song. It’s not about the amount of notes or the dexterity or the hoops you jump through, all those proficiency tests. It’s really all about sitting down and playing Blowing in the Wind. In those days, I had the harmonica and the guitar underneath to accompany myself, and that’s what used to thrill me after school. When the real work used to start not the homework! So it was the little that pleased me, you can’t beat a great simple tune.

There is a beauty in simplicity.

And, if you can only play two chords, when you manage that third one…

…you can join Status Quo!

Brilliant quote! I can’t top that one. I was going to say about a quantum leap forward and if it isn’t broke don’t fix it. Your quip was much better than mine, I can’t beat that! 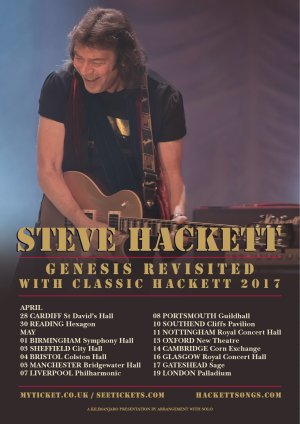 Time has almost gone Steve, so let me ask you about this tour next year.

What songs are you doing from that album? Have you decided yet?

Well the ones being talked about are One for the Vine, a song called Inside Out that didn’t make the album, but I think it was part of those sessions, Blood on the Rooftops, In that Quiet Earth and Afterglow. So I am going to do quite a bit of it really, not all, but quite a lot, along with some other old favourites, some from Genesis, some of the new album and some of my old stuff too.

So it should be a good show then, Steve?

Yes, I very much hope so. It will be a thrill to play the Palladium and other places that I’ve not played before. I remember seeing Cliff and the Shadows there back in the days of Saturday Night at the London Palladium.

Your shows will be getting as long at Springsteen’s if you’re not careful! Well, my time’s gone, I’d better let you go. Thanks for talking with us Steve.

Thanks John, nice talking with you again.

[With photos by Tina Korhonen and Cathy Poulton]