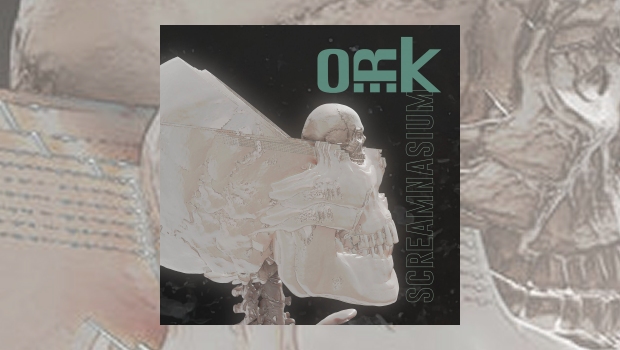 O.R.k.’s last album, Ramagehead, was one of my favourite records of 2019, so I have been eagerly awaiting their latest offering since it was first announced. Their previous effort included a track with guest vocals from System Of A Down’s Serj Tankian, and if it wasn’t for the pandemic, O.R.k. would have been supporting SOAD and taking their music to a much larger audience than in recent years.

O.R.k. is built around the solid foundations of a stellar rhythm section, namely ex-Porcupine Tree bassist Colin Edwin and one of King Crimson’s current drumming trio, Pat Mastelotto (Gavin Harrison being the Kevin Bacon-style meat in their musical family tree sandwich). The line-up is rounded out by award-winning composer/vocalist Lef, who also produced the album, and Marta Suitubi’s Carmelo Pipitone on guitar. This is an eclectic mix of musicians that pulls from alt rock, cinematic soundtracks and art rock as much as it does from pure prog, and their music is all the better for it. You can never quite put your finger on what it is, which is a sign of truly progressive music. with a small ‘p’. At times, vocalist Lef reminds me of Chris Cornell and Jeff Buckley, which makes O.R.k. something very different from other prog and prog metal bands.

The album opens with lead single As I Leave, which is a big attention grabber, carrying on the bombastic style that was so prevalent on their previous LP. The song is built around a bass groove and some playful drumming, before Lef’s huge voice really lets rip as things hot up. A strong start and a sign of things to come. “Did your dreams get old?”

The album’s sophomore track, Unspoken Words features a spiky guitar riff which oozes attitude, and when coupled with the driving bass and drum groove hits you with a ten tonne wall of sound. This one had me thinking of Pearl Jam’s Vs. album, largely due to the drumming being reminiscent of their song Go.

Consequences is the first real change of pace and a slightly more mellow song. Guest co-vocalist Elisa is – dare I say it – doing a Ninet Tayeb by adding her exquisite voice to proceedings. The combination of her and Lef duetting is beautiful and both their vocals are brimming with emotion. Lyrics like “Save me again, survive” help to reinforce the feelings that the music gives you.

I Feel Wrong is where the Jeff Buckley comparison is most noticeable, much of that is down to the feel of the early parts of the song, from the vocal phrasing to the guitar playing. This song could easily sit alongside other songs on Buckley’s Grace album to my ears, and that’s some of the highest praise I can give.

Don’t Call Me A Joke was the only single released prior to the album that left me a little cold. Like most things, it works much better in context within the album’s running order and comes at just the right time. The big singalong chorus and infectious backing vocals serve to lift the spirits and drive things forward into the second half of the record. Hearing this song on the album and not as a standalone has turned it into a firm favourite now.

Every album written during lockdown has to have their obligatory pandemic anthem, and one assumes O.R.k.’s is the rather sumptuous Hope for the Ordinary. This song is positively dripping with light and shade, and is all the more effective for that. When the tempo shifts partway through it’s really powerful and the production pulls you into the soundscape they are creating. This song has far more shifting sections than you expect from a four-and-a-half minute track. A standout song of 2022, and not just from this record.

The keyboard intro to Deadly Bite signifies a slight change of tone, and this is another song that builds to a bigger guitar sound and more powerful vocals as we hit the chorus. That makes it possibly the most by-the-numbers track here structurally, but the lyrics “Dreams are parasites, Dreams are deadly bites” hit hard.

The way that Something Broke opens is suitably disarming, to the point that when the band kicks in fully you are hit with an almost visceral jolt. I loved that. The overall groove to this song is wonderfully animated and it’s hard to sit still while listening to it, it really gets under your skin and quickly into your bones.

The next song, Lonely Crowd, starts with some haunting piano, leading into the power of Lef’s vocal range before the full band kicks in to full effect. And when that happens the hairs stood up on the back of my neck. This is definitely one of my favourites on the record.

Someone Waits, the only song here to run longer than five minutes, rounds off the record in cinematic style, with the addition of Jo Quail’s cello. Her presence makes this a real contender for track of the album, and O.R.k. finish their fourth record with the same high musical bar that they started it with.

I usually judge music on the third full listen, by the physical reaction I have from listening to it. Screamnasium doesn’t have intricate guitar solos to do my screwed up noodling face to, but it has lots of air drums and air bass moments. And at least one chance to get up and dance. I’m calling that a win. Lyrically, I never quite got a handle on what each song was about, but I did feel the emotional weight across the record and the themes of unfulfilled dreams.

This is a supergroup at the height of their powers doing exactly what a supergroup should do, bringing all the different elements of each individual musician into play to create something new and unique. At times there are shades of various musicians I have an affinity for, from outside what we call Prog, along with the more anthemic end of Belew-era King Crimson, but only on the surface. It’s like all the music I ever listened to has been thrown into a melting pot and this is what came out. Concise, crafted songs that should appeal to a wide range of rock fans inside and outside prog circles. This isn’t a supergroup you need to come to via the back catalogue of its members, it’s very much a band in its own right.

In a year when Edwin’s former Porcupine Tree bandmates seem to have unceremoniously abandoned him with no real explanation, he’s made a record that can stand shoulder to shoulder with Closure/Continuation. The same level of musicianship, song writing and production quality, but much more likely to put a smile on your face. More subtler and diverse than Ramagehead, once this album gets its hooks into you, it’s really something special. I will be watching O.R.k.’s career with interest and I would love to hear this record played live when they go out on tour next year.