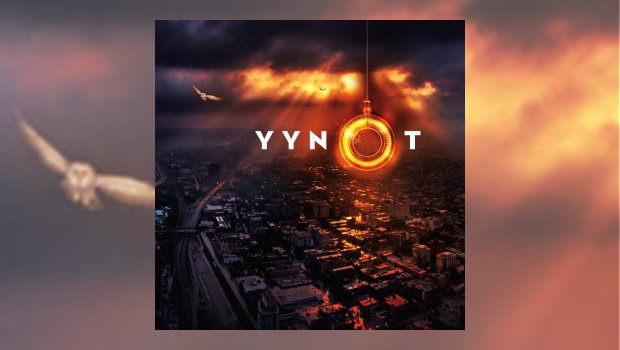 I discovered YYNOT on CDBaby, as I often do when searching for new music to review, and when I first heard Rocky Kuner’s vocals, I was intigued at how similarly she sang like Geddy Lee. This piqued my interest further and I read how YYNOT like to perform Rush songs, so I watched them do a cover of The Temple of Syrinx on YouTube, from the Eau Gallie Civic Center in Melbourne, Florida. Rocky confirmed my initial suspicions that she could handle some of Rush’s best work. Check out their website.

Furthermore YYNOT have been featured as ‘Tribute Band of the Month’ at RushCon.org, and their original songs have won national airplay in Rush’s home country of Canada. Billy Alexander (guitars, vocals and keys) and Tim Starace (bass) collaborated to create Rush covers on YouTube before starting YYNOT. Drums on the album were largely played by Chris Moore and Tony Morra, but current drummer Joel Stevenett was found on YouTube by a Rush online group who suggested that he join the band. Billy found 19-year old Rocky Kuner performing a jaw-dropping version of Deep Purple’s Highway Star and the rest, as they say, was the future, the band having played some magical places, including the Whiskey A Go-Go in Hollywood.

YYNOT is the real thing; not only a very good cover band, but a group of dynamic artists in their own right, so I knew I had to review their debut album, and I was immediately impressed with their original music, which has the sound and feel of classic Rush.

Although their Rush cover work is monumental, this band is poised to expand beyond that boundary with this debut album. It is one of the better debut albums I have heard this year. Hourglass opens with the spirited charge of a horse racing from the gate, with blazing Rush-like lead guitars and thumping drums and bass, before Rocky sings, “Some may say true freedom lives in the mind. No palace made of gold can truly make one feel the sublime. The destination calls and it’s whispering for more. Yet one arrives to learn the journey was reward…inside”. Yes, I thought so too: all the energy of Rush’s Freewill, captured with the eternal message of Led Zeppelin’s Kashmir. Great lyrics are so important and this debut is off to a powerful start, it’s a great song full of Rush hints and original music.

Rocking drums and bass chords, surrounded by lively electric guitar, opens Invisible Heart with a bold presence. Kuner sings, “No one can know what you hold inside. If you’re always hiding your scars. The world turns to dust and the sky into night. When you live with an invisible heart”. Deeply emotional lyrics set to more Rush-like themes, Alexander plays a stunning guitar solo with Starace perfectly inflecting bass, drums supporting with dynamic thunder. Kuner brings feeling to the lyrics of Etheria: “It’s in the way mankind sometimes acts unkind. It’s on the open airwaves talking cheap and blind. It’s every act of anger blamed on someone else’s lies. It’s burning, wasting energy while running out of time”. This time her voice must fight for room as Alexander rips another powerful solo, like a jet taking off from an aircraft carrier. Starace’s bass sounds like Geddy Lee, providing fullness to the sound as Chris Moore’s drums round out the core. When Kuner sings, “And travel to Etheria”, you’ll swear you’re hearing Geddy.

To Come Back Home opens with cool keyboards before Alexander fires up some wonderful acoustic guitar. Kuner sings, “Drifting away. Lost without a trace. I just want to feel. My feet touch the ground”, this time in a softer, warmer voice, just what we needed and a nice break. One of the best songs on the album, it’s full of warm banks of keyboards, Starace’s bass riffs melding well with Stevenett’s drums.

Kingdom Come opens with an excerpt from The Three Stooges, before roaring drums and electric guitar fill the air. A Rush–like riff extravaganza follows in the best song on the album, before acoustic guitar intercedes, supported with heavy bass. That ‘falling back’ Rush guitar sound from the beginning of Cygnus X-1, Book II, off Hemispheres, brings back great memories, then Kuner sings, “There’s no need to live in haste. For giving up on a wish unsung. Dreams can change yet not go to waste. And wherever threats in the night come from. Hold strong until Kingdom Come”. I hear themes of Rush in the lyrics as well and the supporting video is perfect.

The Curtain Falls is full of more good writing and music, Kuner singing, “Synchronized insanity. The rise and crash of hopes and dreams. The haze of passion swept away. By a truth we could not see. We stare into each other’s eyes. Until finally we agree”, while awesome Rush-like music fills the soundscape: original music with hints of the best. Violin from Macie Slick warms the entire production. Another Trip Around the Sun features powerful instrumental sections which will take you back to Rush’s golden moments, later Kuner sings, “With every day. There’s hope for tomorrow. Finding our way. On time that we borrow. Let’s take a trip around the sun”. Uplifting and original combined with reminders of the sound of one of progressive rock’s best bands.

Run on Love is a fun, almost country rock love song. Bluesy lead guitar and thumping bass is captured well by Kuner; “Time to let go of everything that slows me down. All the negative energy. There’s too much of that around. Time to get down to whatever really turns me on. Let’s get this party on. Turn the music loud!” Absolutely! YYNOT, the band’s signature instrumental showcase, concludes the album. Hold on to everything that might take wind, as the hurricane of guitar riffs, bass and drums will feel like lift off. Everything but the kitchen sink is included in this devastating instrumental extravaganza. Bet you are ready for Album II. I am.

YYNOT’s debut is an excellent surprise. They are a monster Rush tribute band, you will swear you are hearing the original band on their covers, but give the album a chance. Multiple listens will allow you to appreciate their original contributions. You’ll always hear the similarities, but if you concentrate on the lyrics you will clearly hear the difference. Besides, Rush isn’t making this kind of music anymore.