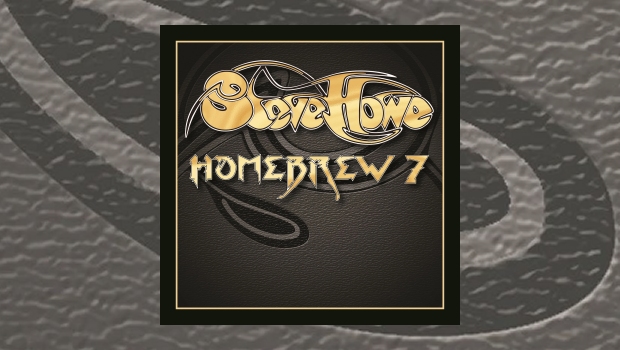 Legendary Yes guitarist Steve Howe has recently released the seventh edition of his Homebrew albums. Homebrew 7 marks the 25th anniversary of the guitar legend’s first album in this series. This set largely contains recordings from Steve’s home archive of demos and tracks, originally recorded for one of his many solo or group projects with Yes, Asia, ABWH or GTR. Homebrew 7 is slightly different from its predecessors to the extent that none of the tracks have been released in any shape or form before, nor are there any plans to re-record them in the future.

“Many are things I’ve enjoyed saving until the right moment,” says Howe, “and the Homebrew series allows this. Some tracks have matured with my nurturing but others have been recently rediscovered.”

This collection features songs from the late 1970s through to 2016, across Howe’s vast array of playing styles. Each of the twenty-one tracks is dated and accompanied by Howe’s background notes, plus details of the instrumentation. The total playing time is 50-minutes. Most of the songs are solo recordings by Howe with occasional contributions from sons Dylan and Virgil on keyboards and drums respectively, with Phil Spalding on bass guitar (Half Way). The booklet contains the lyrics for the four vocal tracks and is also illustrated by Howe’s own photography. It’s an ultimate solo project anyway, because not only was everything written by Howe, he also arranged, recorded and produced the whole thing.

It would go too far to analyse all the tracks individually, there are just too many of them and they are quite short too: the average playing time does not exceed two-and-a-half minutes, you do the maths, but I would like to highlight a few that stand out for whatever reason. There’s the opening track, The Glider, a rocking song that definitely has more potential but is ultra-short at just over a minute-and-a-half, which is a shame. A comment that will often turn out to be applicable.

October, featuring Howe on his favourite Gibson ES 175D, is heavily orchestrated and somewhat reminiscent of a mini version of his Double Rondo from 1979’s The Steve Howe Album. The next song, Half Way, has been re-worked more often before and is one of four vocal tracks, a great theme with the master’s signature soloing. Deanscape is inspired by friend Roger’s drawings. Here the (guitar) synthesiser is at work in a far from characteristic song.

The slide guitar in Tender Hooks is lovely, one of Howe’s best weapons, in my humble opinion. A Lady She Is is by far one of the best songs, dreamy electric play against a background of acoustic guitar and even some mandolin. Not altogether coincidentally, it’s also one of Howe’s own favourites. A vocal tribute to the county where he has lived for many years, in a modest cottage, 1983’s Devon Girl. The full instrumentation, guitar/synthesiser, drums and bass plus the vocal harmonies are all played by the man himself.

A Matter of Fact has Steve’s signature guitar playing once again, this time on Fender Telecaster, the most proggy song yet. On From Another Day we find Steve singing again, accompanying himself on acoustic guitar. This dates back to the period of The Steve Howe Album and apparently did not make the cut. Modern and highly distorted sounding guitar playing on Foregone Conclusion, clad with iconic steel guitar; certainly an interesting studio exercise. Space Void is the oldest (1978) and the shortest track, at just over one minute, and also by far the odd one out; a piece from a sci-fi movie, maybe?

If I wasn’t allowed to use the word ‘short’ there would be huge holes in my story. However, that’s not surprising at all; the entire album is based on songs, or rather musical ideas, that have been shelved for whatever reason. Falling between two stools, a bit like that. In some cases, they are fine themes that need to be worked out. In other cases, they remain what they are now: ideas. Not (good) enough to be developed further for one of his bands or solo albums, too valuable not to be released to the public.

Homebrew 7 offers an insight into what the legendary guitarist has been up to over the years. It also gives the true fan an idea of which songs deserved a better fate, as a basis for a song for Yes, Asia or The Steve Howe Trio. But that does not alter the fact that from time to time it is quite enjoyable, those little gems Howe presents us with. And I should certainly not forget him playing the bass guitar. An eclectic collection of musical ideas spanning a period of almost thirty years, with as a distinctive feature, compared to the other albums from the Homebrew series, the fact that they have never seen the light of day before.

And in case you were worried about a successor, don’t; when asked in an interview if there is sufficient material for Homebrew 8, the legendary guitarist answered: “Yes, there is always more”.