Dissolution: the breakups, the heartaches, the dark side of the relationship, our all too human issues with technology and social media, open dissolution in a public forum. Heavy fodder for an album of music but delivered with aplomb by the Thief once again. Opening with notes from the dark end of the piano you’re already anticipating something much darker than Your Wilderness, and it is, and edgier too, but let that not take anything away from it, although if you are going through a breakup this may provide affirmation of your feelings or solace that others feel the same. I know I felt something of the long past, the sadness, pointless anger, and yes, Dissolution. Happy Days.

Bruce Soord is essentially correct essentially when he says, “The title ties into how we’re now bound by this hideous technology that means everybody knows everything about everybody, and everything is played out in the open, and it’s horrible and invasive.” But that said, it can also be beneficial, the openness displayed allowing friends to understand, and those that will offer genuine assistance. A superb tool if used correctly, if not, just a way of watching people come apart at the seams, and, sadly, in public. A balance, a means to assess state of mind and attempt to avoid the mental illnesses that society seems readily enough to inflict. Time for a reassessment of how we live and share? Bound? Tethers can be cut.

That said, I am not disagreeing with Bruce, it’s just a different perspective in a complicated world. A lot of negativity can be generated from social and other media and the things we interact with in our daily lives, but also a lot of good, I know I have found many good friends from those pages, lifted many a gloom, and been inspired to take on new challenges. Ying & Yang, there must be balance. I do agree though that for some there is a time to step away and be alone.

The atmosphere created is balanced and nuanced, the music gritty, and yet when needed also mellow. Dark music for dark places, and a sound that I would say is distinctly The Pineapple Thief’s own. Threatening War drives that anger, the hurt felt in both words and music. Your Wilderness was a grower, now much loved, much of Dissolution hits you straight between the eyes, not a bad thing and, perhaps because that is how it feels at times, representative of the madness and melancholy of people parting their ways.

Given the personnel nature, expectations of greatness are perhaps rightly warranted. The band have not disappointed, for such dark subject matter there is still joy to be found in the materials delivery. Gavin Harrison’s drums are fantastic, easily sitting high amongst the plethora of superb percussionists the genre seems to be blessed with. I think progressive, the bands press notes say Art-Rock, if anything demonstrating that broad brushstroke terms are mere labels for convenience.

Like its predecessor Dissolution works best for me in a single sitting, both in the savouring of the last track to the anticipation of the tasting of the next one. All That You’ve Got is great; power and the powerless, anger, recrimination and reflection, it is an argument that many of us have had. Far Below – you just cannot let go. Great drum and keyboard breaks in here, just the right length. Pillar of Salt is principally acoustic, short and sweet – or should that be bittersweet?

I do find myself revisiting those quieter moments, Pillar of Salt, Not Naming Any Names and Shed A Light, Pillar… reminding me a little of Paul Weller’s Wildwood. It serves well in that company. As a collection they feel like a composite piece, the contribution of bassist Jon Sykes and keyboardist Steve Kitch being fully part of the sum of the whole.

‘Joyous’ is the wrong word given the thematic, but it is a beautiful listen. 2016’s Your Wilderness is considered a breakthrough, Bruce considers it a reboot of the band, and says of the words of this one “I really put an extra bit of my heart and soul into the lyrics. It’s probably one of the bleakest records, lyrically, that I’ve done.” Perhaps, but I think ‘thought provoking’ is more appropriate.

White Mist is the album’s epic piece featuring the talents of American experimental guitarist David Torn. With ebb and flow, and maybe a little of Mr Harrison’s King Crimson connection shining through the influences, it is the Art Rock on which precious foundations are built. Best listen for this track has been the studio, the stereo sound washing through the speakers in an undisturbed environment. Door shut, the nearby A30 disappears, it’s good through headphones as well.

I really like it, and in a world where I am required to place albums I hear in merit, Dissolution has easily snuck into my 2018 top ten. It will take something very special to displace it, but who knows in this era of resurgent progressive music. Unlike the old school, this is the new curriculum. I also feel a sense of irony, both The Pineapple Thief and Encircled have produced albums around a similar theme, both concerned about our relationship with technology, and both are great audio treats. For Dissolution, snuggle down with a nice Rioja, wallow in the sadness, and as the last drop passes your lips on the way to digestive oblivion, smile in the positivity of Shed A Light. Where there is light, there is hope! The absolutes are what we make them, the materials our own to mould.

Bruce says of Shed A Light, when reflecting on our media enriched (!) society; “That song is about people giving up far too easily, which is something exacerbated by the whole world of social media. People don’t spend the time they need to alone, reflecting on themselves and the people around them. It’s saying that you can either carry on living this lie or look at yourselves and make something of what you’ve got. I feel like we’re at a real crossroads. It feels that there’s been a real reaction this year. People are starting to realise that it’s gone too far. Since I finished writing the record, the concept has really come to the surface. Everyone is talking about the issue of privacy. Even Simon Cowell is saying he hasn’t had a phone for 10 months. People are waking up and saying, ‘This is hideous, I don’t like it and I don’t want it.’”

Dissolution is released on 31st August and will also be available on bluray, and presumably 5.1. That, I think, will really be worthy of a listen.

So, top ten, darker, with a hint of light, placed on turntable, in player, or the medium of your choice, it is your turn to determine what I believe is a great album. And remember that as time moves forward “The daylight has changed for everyone”. 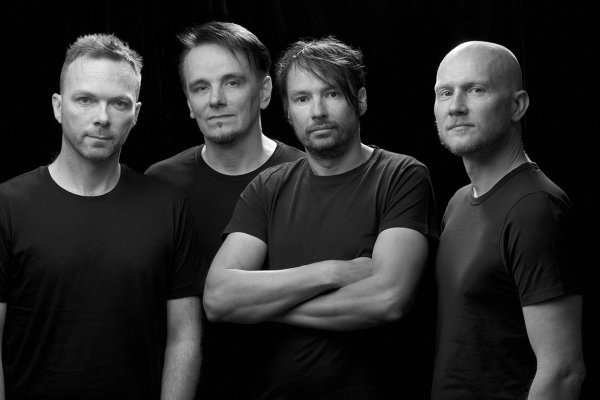