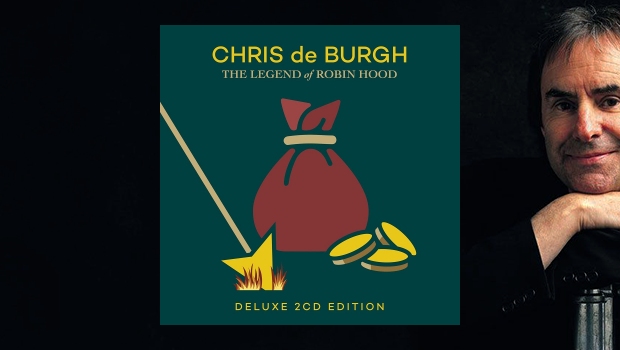 I am in the car with my daughter, a mother of two. “Dad, what kind of music are we listening to? Is that something from Robin Hood?”. To my surprise she got it right first time; it is indeed Chris de Burgh’s new concept album, The Legend of Robin Hood. ‘Is that a plus or minus? Recognisable or trite?’, I can already hear you asking. ‘Chris de Burgh; is he still alive?’ And: ‘Is it prog?’ All these questions will be answered, please bear with me.

To start with the penultimate question: Yes, he is still alive. Very much so, not only is there a new album, but the now 73-year-old bard/singer-songwriter (currently living in Wales) still regularly performs to packed houses, a tour scheduled in October for some twelve shows.

I’d kind of lost track of him to be honest, especially in the ’80s and ’90s I enjoyed following this man, but for the past two decades I’ve only managed to do so from a distance. He has not been idle in the last twenty years, but the prog content was reduced to a minimum during that period.

This only changed recently, purely by coincidence. He was commissioned by a German company to co-write a musical about Robin Hood. After entrusting eight songs to paper, the thought gradually arose, why not create an entire album? And so it came to pass, 23 songs saw the light of day and a new album was born.

Chris de Burgh, even from his stage (he was born Christopher John Davison) has a thing for castles. He was born a British Irishman and lived there for many years. The fact that his ancestors worked for the monarchs of the time may have something to do with his preference for these kinds of stories. Think also of the title of his 1974 debut album, Far Beyond These Castle Walls, but also 1979’s Crusader. An accomplished writer, he plunged with gusto into the full life story of the legendary folklore hero of Sherwood Forest, from his birth and childhood to his death by an arrow from a dastardly arch enemy. On 12th March 2020, de Burgh finished recording the album at Peter Gabriel’s Real World Studios in Bath.

This time Chris de Burgh let himself be carried away by the legendary story. Okay, there is a central theme, but the music can also stand on its own, as a new collection of old-fashioned and recognisable Chris de Burgh material. The Legend of Robin Hood is already the singer-songwriter’s 27th album, put together with the assistance of a number of well-known and versatile session musicians.

Medieval influences can be heard (The Tale of Robin Hood) but also traditional stories, children’s songs, folk (The Man with the Double Face), Celtic sounds (We’ve Got the Money), classical (The Robin Hood Overture), a number of ballads (Only a Child, Open Your Eyes, Where My Last Arrow Falls) and undoubtedly somewhere in there is still a good sing-along and future audience favourite (Legacy). He even sees an opportunity to slightly adapt and insert an existing rock song (Revolution/Light a Fire! from 1982) plus a real Covid song (Live Life, Live Well).

The Deluxe edition contains a bonus CD with live songs from 2017. It is good to hear that the sweet-voiced singer can also draw on a different source. With Don’t Pay the Ferryman and Bethlehem, he also shows he’s capable of a potent rock sound. Of course, Lady in Red, his big hit from 1986, is also present. He gained world fame for it and will probably never get rid of the stigma of being a ballad singer, but the song certainly did him no harm.

And what about the prog content? That remains an unanswered question. Well, this has decreased quite a bit over the years, if I’m honest. Still, there are sufficient moments on this album when fans of the genre get their money’s worth. Chris de Burgh has been inspired to write an excellent new album, his best in recent years. Even my daughter has to admit it.