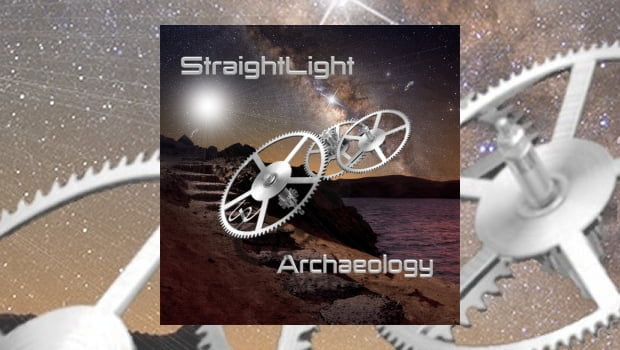 As a lover of progressive rock music and an occasional reviewer, it is always a real pleasure to ‘take the road less travelled’ and explore less well-known prog rock bands and artists. The likes of Bandcamp, internet radio and smaller, independent labels have a wealth of quality music on offer, but without that all important buzz of publicity (even through social media sites such as Facebook and Twitter) to bring it to a wider audience. So much is sadly destined to remain undiscovered.

One such discovery of a few months ago was an album called Archaeology by an American band called Straight Light. It is wonderfully accessible slab of smooth AOR-style progressive rock that the USA have always done so well – all the way back to mid-’70s and the ‘pomp rock’ of Styx, Kansas and Starcastle, among others. Multi-layered guitar and keyboard complexity, without swamping the melody, with warm, soulful vocals reminiscent of Michael McDonald (of the Doobie Brothers, Steely Dan and mainstream solo success).

The story of Straight Light goes back to 1973, when a group of enthusiastic young musicians got together, took a chance on going full-time and had a real go at taking their brand of prog rock to a wider audience with a major record contract. But it was not to be, as the American music industry moved away from progressive rock. By 1980, and after several personnel changes, the band had called it a day and that seemed to be that.

However, in 2007 vocalist and guitarist Brent McDonald and keyboardist Bart Garratt decided to have a go at resurrecting the project. Over several years of internet-based song writing and music sharing, brand new music with the spirit of the original band was painstakingly created until there was enough material for one album, and possibly two.  Joined by Bill Roelofs on drums and percussion, amongst others, the album Love Over Power came out in 2016 and was well-received by the old fanbase, whilst picking up a new generation of listeners. Archaeology was scheduled for a 2019 release, but a raft of circumstances – and a firm desire by Brent and Bart to have no filler material on the album – led to it being delayed until the summer of 2022.

Archaeology‘s title track kicks the album off strongly with rich, ’80s keyboard chords and supporting rhythm guitar, but in no time at all Brent’s warm and soulful vocals wash over the instrumentation and define what Straight Light are all about. There are hints of funk and jazz in the snatches of lead guitar, and smooth harmonies take us to the catchy chorus:

“Moving forward through the ages
‘Til we reach the here and now
When the foundations are uncovered
We’ll be right back at the beginning
Where it all began
Hidden from view, but never far away.”

Unashamedly mainstream and melodic, the retro-character sparkles with modern production values. Brent’s guitar soloing and Bart’s keyboard flourishes (with echoes of ELP here and there) are undeniably full-blown prog and are given time to flow and develop before a reprise of the main theme – “Time is no match for archaeology”. It is a personal statement from Brent and Bart of the power of introspection, finding inspiration in the band’s previous musical history and rediscovering the talents of life-long friends. Lovely sentiments indeed.

Melungeon has a darker, more muscular feel, with heavier riffing from Brent prominent from the start, and powerful drums from Bill to propel the track through. Bart’s keyboards are given even room to explore here, but the lyrical content, highlighting aspects of racism – the Melungeon people’s struggle to remain free during the days of slavery – keep the song well-grounded. Some enjoyable proggy moments too!

“Can You spot the foe from friend?
One mistake could be the end…
… See the color of my skin
That’s the world that I live in…”


Acoustic guitar patterns introduce Modern Prometheus, but there is a brooding menace here, as the slower tempo builds and the song gains gravitas. The warmth of the lead vocals and harmonies are juxtaposed against the insistent intertwining of guitar and keyboards. Taking its inspiration from Mary Shelley’s Frankenstein novel, the lyrics are written from the monster’s perspective and are both articulate and moving.

“Take me as I am
Prometheus, don’t turn away
Please open your heart and find a place for me”

Polybius takes its name from a supposedly CIA-planted mind-control video game in Portland, Oregon in the early ’80s. Urban myth or not, the track has an infectious and funky swagger throughout, the vocals and music integrating very effectively. Brent plays one of his most expressive guitar solos and Tere Bertke’s bass is very effective in shaping the song’s structure. Whilst not especially proggy, it is still deceptively complex despite its overtly accessible and user-friendly façade.

Not to be Denied creates an upbeat and optimistic feel, and Bart’s lighter vocals provide a refreshing contrast to Brent’s richer tones. There are some lovely melodic and soaring guitar lines to enjoy as well as more keyboard virtuosity. A refreshing AOR feel pervades throughout and the vocal interplay and complex musical ensemble work is highly enjoyable.

Everyone Sees starts with an infectious rhythm and lightness of touch, but once again there is a hidden depth and intricacy to the song that gradually surfaces and rises fully after the mid-point with Bart’s keyboards twisting and turning, eventually joined by well-judged bursts of guitar. It’s another song where the progressive nature of the music arrives by stealth from seemingly a mainstream musical structure. The lyrics celebrate our unique skills and talents and how together we can do great things.

Brent handles keyboards, guitar and bass on Control, and the piano-led introduction takes us into another rich and melodic amalgam of vocals and music with pulses of keyboard chords and undulating bass. There is musical grandeur yet again, but the Doobie Brothers-style vocals always provide an intriguing counterpoint. At over 8-minutes long, there is plenty of time for guitar and keyboards to soar and sweep over you, whilst Bill’s drumming maintains the urgent pace of the track through to the vocal fade-out. Brent says the song was inspired by the plight of the Jews during the Holocaust and how it relates to current events.

“Do we want control of our lives?
Or someone taking everything that’s real”


Behind the Lines concludes the album with a burst of acoustic guitar before a mid-tempo rhythm from bass and drums and some driving guitar work provides the musical framework over which Brent’s ominous and defiant vocals push over. They highlight the struggle between playing it safe or having faith in not compromising your beliefs or potential. In many ways it is a microcosm of what has come before, with rich musicality running through a deep and meaningful lyrical content, and it rounds off this enjoyable release nicely.

Commercial, melodic and accessible, but don’t be fooled with the smooth, soulful AOR sheen of Archaeology that flows over you like warm treacle. It has a deceptively complex and progressive character, with enough sparkling guitar and keyboard noodlings to satisfy any prog rock aficionados who like their melodies and harmonies to the fore. Fresh and modern, but with clear links to the ’70s origins of the band, it is definitely worthy of further exploration. Check out the Website for details on how to get this quality melodic prog release.