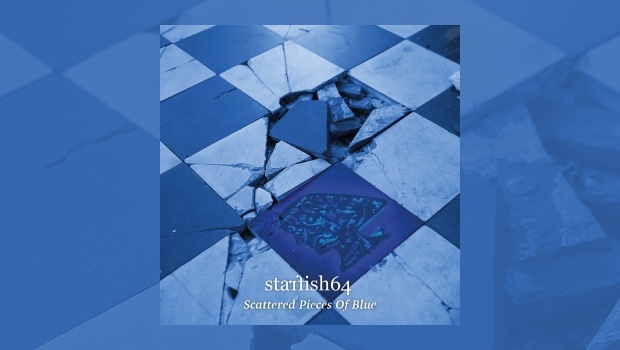 Compelling and intriguing are the first thoughts that come to mind when I recall my introduction to the music of the German band Starfish64. It was 2018 with the release of The Future in Reverse, that I found to be a beguiling work of progressive rock with its melodic, absorbing, and dreamy atmospheric music, and if this was a bellwether for Scattered Pieces of Blue, I was in for a treat!

Formed in 2006, Starfish64 was supposed to be the moniker by which singer-songwriter and multi-instrumentalist Dieter Hoffmann would express his music as a singer/songwriter. Over time it evolved and stabilised into a progressive/art rock band. Currently the group consists of Dieter Hoffmann (vocals, keyboards, guitars), Henrik Kropp (drums), Martin Pownall (bass) and Dominik Suhl (guitars). In a recent interview, Hoffman said that, aside from the core line-up, he likes to keep things fresh and open and use other musicians as needed. Scattered Pieces of Blue is a perfect reflection of this process.

The earlier releases are quite intense and emotive lyrically with topics reflecting real-life challenges such as loneliness and mental health struggles and the toils of life, in general. The melancholy-laden, in many cases dystopian subject matter throughout all their music is treated with the utmost compassion and empathy, all delivered in an ethereal beauty.

Scattered Pieces of Blue is the band’s eighth album. It is cornucopia of atmospheric, eclectic pop, rock, electronica, and psychedelia, all wrapped up in a 10-song cycle clocking in at a little over 41-minutes. Recorded between December 2020 and January 2022, it is lush, lyrical, and extremely moving. The cover art is very intriguing and appropriate for this release; smashed indigo blue and white mosaic tiles reminiscent of a chessboard. As a fan and a consumer of progressive music, aside from the music itself, I am drawn into an album by its artwork, and specifically in this release, which sets the mood for what is to come.

The album begins with Blue Piece (Of Something in the Air) a whirling and haunting psychedelic piece, driven by pulsating drumming and utterly sensational keyboards and bass creating a textured, driven, and moody atmosphere. This song is mesmerising and almost intoxicating with Hoffman’s monotonous vocal delivery to added effect. The dramatic tempo shift almost three-quarters through the song and the judicious use of reverbing sends the tune to another dimension.

Birdsong, the second cut and the only single off the album, begins with a gentle monotonous rhythm and a soft introduction of keyboards, drumbeat and a guitar that is sensuous and inviting, setting the scene. It’s Hoffman’s vocal delivery and the tune’s stunning lyrics that make this song a standout. It’s literary and it’s magical. I actually “feel” the fresh air as Lily opens up her third floor apartment windows and notices the “quietness” from the usual busy streets below and takes in the wonder and exquisite beauty and cacophony of the birdsong.

“The sunlight paints the chimneys of the roof,
Kaleidoscopic mirrors
All the windows at front side of the houses
The Larks have gathered
Starlings on the highwires
And the swallows
They all join the birdsong”


The song builds gently and methodically with a steady bassline throughout and ends on beautiful guitar and piano solos, tucked astutely within the framework of the song. There is a timelessness and immutability here that is just marvellous and enchanting. It has a meditative, floating, euphoric quality to it. I found myself repeating this song time after time while doing this review. To take time to slow down and notice the beauty of the world around you in quietness and solitude. It is such an uplifting song.

The third track, which is exquisitely segued here, Sunrise Over the Weathered Roofs of Platania is a gorgeous piece of acoustic guitar playing by Hoffman, with vivid and crisp signature tones of the Martin guitar and nylon strings making a smooth, velvety sound. Just absolute bliss.

That bliss and calm are broken, however, with the sombre and darker Forget Me Not, a sharp, broody tune reminiscent of the late 1970s and early 1980s New Wave acts, such Talking Heads, INXS, Eurythmics, and The Church. The subject matter of a jilted lover and his fixation on a failed relationship, stalking, brings an intensity and a sense of uneasiness to the song. The pulsating drums create a driving rhythm and the combination of keyboards and synthesiser complement each other superbly and add to the build-up of tension, with an utterly fantastic bassline providing the canvass for the hypnotic vocal. This is a brilliant track musically and nostalgically harkens back to those earlier times.

Blue Piece (Reprise) is an aural and atmospheric interlude which is quite enchanting. Synthesisers paint a mysterious, dark background with the introduction of narration, building up the story with intrigue and drama. The voice slowly dissipates and fades with an echo effect and a drastic tempo shift, minimising the music as a subtle piano keystroke closes out this moody track, segueing (again brilliantly) into the bittersweet and melancholy Happiness, another gorgeously emotive atmospheric gem. The music is stunning, with its sense of longing and sadness. Hoffman’s searching and expressive vocals are perfectly suited for this tune, and the use of the flugelhorn is as brilliant as it is heavenly.

Time’s Up Utopia begins the second side and is the longest of the tracks of this release. It is simply sensational; spacey, unorthodox, and literary. It has a soundtrack quality to it; an inhabited world and a fast-approaching asteroid are about to collide, a subject richly covered by science fiction writers and film makers is now superbly told in this musical epic.

Intricate keyboards with a gentle rhythmic drumming cadence create a spacey atmosphere, very reminiscent of Tangerine Dream and Kraftwerk. Hoffman’s vocals are delivered in a gentle anguished acceptance of the fact the end is near. The tempo shifts during the chorus and with introduction of a female vocal for harmony and builds with exquisite keyboards undergirding the track. One could feel both the anxiety and the tension as Hoffman’s sings,

“One last hoorah for utopia,
This brave new world,
Is going to burst in one final blast”


The song fades with a tinge of sadness and loss. A brilliant piece of progressive music that leaves one emotionally drained and engrossed in the story with the music as the driver.

The last three tracks keep the momentum sustained and bring the album to a satisfying close. Intersection One, a keyboard-driven reprise of Time’s Up Utopia, allows the listener to grab their breath and absorb what just happened. Number Forty-Five is a psychedelic beauty and one of the heavier songs of the set. The drumming rhythm paints the canvas for this tune. With a wicked bassline and a jangling guitar that almost sounds like a sitar here, the rhythm and beat are utterly infectious. Hoffman glories in the fusion of the sixties folk rock sound of the Byrd’s and the new wave sound of the 1980s on this track.

The last track, Space Junk, is a guitar driven gem that starts with a Gordon Lightfoot-like acoustic guitar rhythm and escalates dramatically into a rock anthem with Floydian licks and and a dark moody atmosphere, which I wished was a bit longer, but nonetheless closes the album superbly.

Scattered Pieces of Blue is mesmerising, cinematic, atmospheric, and poetic. The arrangements are articulate and the production and engineering razor sharp and pristine, with stellar musicianship, second to none. It is also sprinkled with acoustic guitar passages, a beckoning and recognition to Hoffman’s love of the singer/songwriter genre. Hoffman’s voice, both solo and in harmony with others, is very distinctive and blends in quite well with this brand of progressive music. The brilliance of Hoffman on this album is his unique ability to integrate disparate styles of music and mould them into his musical voice and vision. It takes a few listens to appreciate the breadth and scope of this magnificent album, but it is well worth that investment.