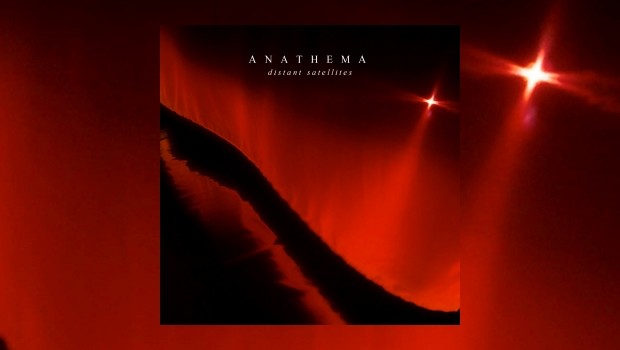 I have been battering the keyboard at this reviewing lark for a few years now. As such I get sent albums from every corner of the disparate genre known as prog. You would think being a prog writer I would be well aware of Anathema, but actually they have largely passed me by. I recall thinking that We’re Here Because We’re Here was OK, if you like your stadium-sized shout-alongs, but Distant Satellites is the first album of theirs I have listened to in any depth, so I arrive with very few preconceptions, which makes a nice change.

Distant Satellites has already had thousands of words written about it; in Amazon reviews, in FB groups, magazines, prog websites, etc etc, so many in fact that it has made me wonder what all the fuss is about. My first impression, listening to The Lost Song Part 1, is in what way is this progressive, or even “prog”, a style of music often sadly more akin to regression than progression? That first track, with its strident vocals and anthemic feel sounds like the sort of stadium-pleasing fare that Coldplay bore everyone to death with. Part 2 has some nice female vocals courtesy of Lee Douglas, and lyrically, this is all very lovey-dovey and poppy. Prog it ain’t.

Another thing I cannot get a handle on is the oft made claims of a similarity to Radiohead. If Anathema were half as experimental as the wilful Oxford troupe, then maybe the “prog” tag would be appropriate. Dusk (Dark Is Descending) as well as being nowhere near as threatening as the title implies is more chest beating stridency over a simple descending three chord pattern of the kind you can imagine wafting over Glastonbury as punters doze in the sun (or more likely, mud). Maybe that’s where Anathema want to be, and I don’t blame them for that at all.

The Guardian, bless ‘em, describe this album as possessing “a fearless sonic curiosity”, but they wouldn’t know true progressive music if it slapped them with a kipper. Frankly I have little time for “prog” as a style, I much prefer something that is genuinely progressive in whatever genre it happens to be. This album is, to my ears, nothing of the kind, and is a tilt at the bland stadium rock of Chris Martin’s lot and while well made, it is built around very simple music that may float the boats of the hordes of Coldplay fans, but it leaves me cold.

Lee’s vocals return on Ariel, a slower number led by piano that is actually rather nice. One thing I have noticed by now is the anodyne nature of the lyrics. Every song seems to be a search to express deep feeling that falls well short and only ends up sounding forced due to the constant bombast applied to the music.

The dynamics of the album are somewhat repetitive, a lot of the songs arriving at weary sounding tub-thumping crescendos from quiet beginnings, and until track seven are all of roughly the same length, which doesn’t help. One plus point is that Vincent Cavanagh and Lee Douglas can actually sing rather well, something quite rare in the prog world these days.

Calling a band “Anathema” is asking for trouble, and they go one further with a song called that, too. As you would expect the lyrics to this one are autobiographical, the author proclaiming “it gave us a purpose sometimes, it gave us a reason and a rhyme, looking for meaning in song, searching and searching so long, but we laughed, we cried, we fought, and we tried, and we failed…” There’s honesty for you at least. Even on this song the cloying romanticism of the lyrics elsewhere creeps in with the pay-off “…but I loved you”, giving the words a double meaning. Yes, we get the point by now! Musically, this is the most interesting tune on the album, with a nice orchestral-electronica arrangement and a decent guitar solo. Too overwrought by half for me, but well executed nonetheless.

You’re Not Alone dares to be a bit heavy, which apparently Anathema were once upon a time. The guitarist remembers how to riff for three and a half minutes in a semi-rousing fashion. That one and the next are instrumentals so at least we are not subjected to lazy and endless “I was lost, then I found you” lyrics for a few minutes. Firelight is a couple of minutes of organ chords, and the album is now treading water, waiting for the inevitable return of lighters aloft stadium rawk. Interestingly, the title track starts with some techno beats, Vincent Cavanagh crooning “And it makes me wanna cry, caught you as I floated by”. Now there’s a surprise…

Distant Satellites the song is over eight minutes long for no good reason as it goes hardly anywhere at all, the tempo barely altering. I’m almost nostalgic for the quiet start building to a toe-curling crescendo! “I’m alive inside these dreams” sings Lee, and all this emoting comes over as so much empty bluster, particularly this far into the album, it wears you down. I have listened to the album a number of times before writing this, but it fails to grab me, as you’ve no doubt noticed by now. It is with some relief, both to me and I’ve no doubt to you dear reader as well, that we arrive at the last track. Take Shelter is a far more reflective number and at least is a little different to what preceded it. Lee returns to tell us she “lost myself in you” (groan) to the accompaniment of Clannad plus electronic beats, building to the expected triumphal climax.

As I am relatively new to this band, I have nothing to compare this album to, but it did prompt me to search out Grooveshark for We’re Here… from four years ago, and it seems to do what Distant Satellites does, but better. The dynamics are far better and it is much more musically varied making me want to listen again, unlike this new one. I still can’t see what all the fuss is about and Distant Satellites is the kind of mainstream album that should shift a whole load of units in Tescos as it is crammed to the brim with far too much sugar, just like a lot of produce in that store.