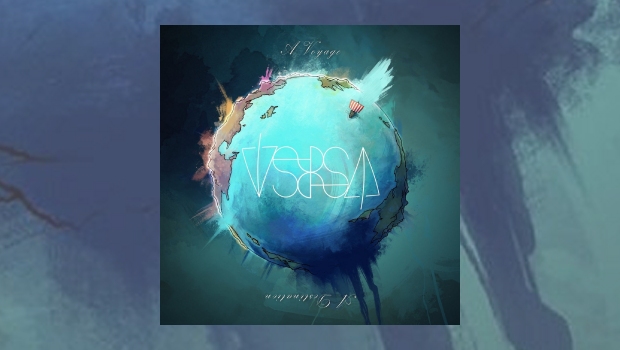 This album from Canadian band Versa, A Voyage / A Destination, is their third (and first for a decade) but the first I have heard, and I suspect I’m not alone in being new to them. Approaching the album with no expectations or preconceptions, I’ve found it rather a breath of fresh air. Actually, I suppose I had some expectation, given the guest list, which is impressive, and includes Jim Grey (Caligula’s Horse) and Marjana Semkina (Iamthemorning) on vocals, Nick D’Virgilio (Big Big Train, Spock’s Beard, etc.) on drums and percussion, Eric Gillette (Neal Morse Band) on guitar and vocals, and Lars Fredrik Frøislie (Wobbler) on organ. With that kind of cast, one would expect something pretty proggy. In reality, there are more post-rock sounds and influences, but with a prog twist for sure.

Opening track, the epic Pool of the Naiads, is the most typically prog song I suppose, and makes a great introduction to the record. Eric Gillette appears on this one, handling vocals and guitar on a song which is quite distinctly different to his usual style. It begins in a mysterious folky way, with a flavour of the sort of soundscape Lunatic Soul achieved on Through Shaded Woods. This is soon left behind for full blown prog however, courtesy of Lars Fredrik Frøislie and his distinctive organ playing. As the story of the water nymphs unfolds, the pastoral tones return, shades of Jethro Tull perhaps, and with the beautiful melodic tones of Hollas Langton’s violin, which is a feature of the album. Also noteworthy is the use of trumpet, which immediately brings Big Big Train to mind with their use of brass. At around 15-minutes long, this track is undoubtedly epic, but it doesn’t outstay its welcome, and the closing five minutes as the themes build to a climax is very impressive, leaving me with the firm belief that this band are worth keeping an eye on.

The next two instrumentals are more succinct. The first, Sea of Vapours, is a beautiful piece, built around repeated guitar picked lines and flute, which then gives way to the violin for the main melody, and it is a sumptuous shimmering thing. Lantern Season has a similarly delicate feel, glistening as it soothes the troubled brow, and again the similarity to BBT is undeniable.

As lovely as it is though, it is a prelude for the final song, the nearly 27-minute long epic title track, Voyage. This begins with what is described as chromatic percussion courtesy of Nick D’Virgilio, playing out a minimalist repeated pattern, and sounding for all the world like a glockenspiel. Jim Grey and Marjana Semkina share lead vocals on this piece, and their voices work superbly well together. A theme emerges, and slowly builds (as Versa tend to do) with drums, keys, guitars, violin and trumpet gradually working up the tension, with chanted vocals. Nick’s drumming style is unmistakable and keeps the momentum pushing on until at around the ten-minute mark, it all stops. Piano and guitar start a slow rebuild, with violin and flute again playing a central role, and the effect is hypnotic and mesmerising. At the half-way mark, we restart again, this time with tremolo picked guitars from Matthew Dolmage and Benjamin Rancourt to the fore, which tremble and shimmer in a remarkable way. The effect is ethereal and wondrous, although for me the following ten-minute segment is overly long. If the idea is to convey a sense of a seemingly endless voyage, with no land in sight, they certainly achieve it, but quite honestly, I think this song would have more impact with some judicious pruning. The dynamics of the opening ten-minutes sadly never return, and although this confounds expectation of some sort of ending (a good thing), it rather fizzles out and I’m not sure it quite works.

Having said all that, it hasn’t stopped me returning to this album many times over, and I do enjoy it. It isn’t what I was expecting, and some of the originality in the compositions is very effective. I believe the intention is to release a follow-up early next year, and I will definitely be checking it out because the best moments on A Voyage / A Destination are sublime. In the meantime, I do urge you to give this a try, as it is a bit different to your average prog release and worthy of investigation.