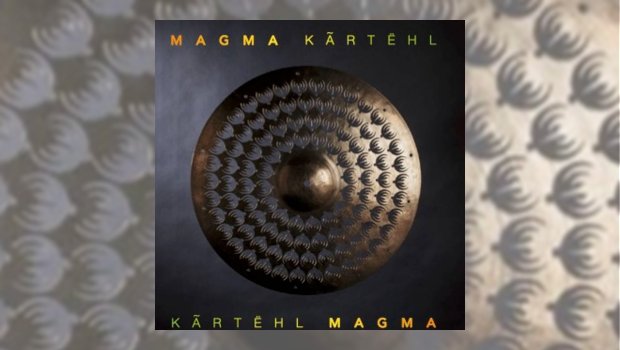 The history of Magma can be traced right back to 1969, and during that time they have forged their own path with consistency and dedication. To describe their music to a new listener is difficult as they sit in their own space, the blending of classical themes, jazz and progressive rock giving rise to the term “Zeuhl”.

As we all know, activity was curtailed during 2020/21, so for Magma more than eighteen months without being able to play a concert allowed them to change their focus. They began the preparations to create a new album, and this one became a group effort with other members contributing to the music. In the past, leader Christian Vander never made the deliberate choice of being the sole composer, but none of the many musicians who have been part of Magma’s journey offered any compositions to the group. This new and current line-up, which was formed in 2020, has now gelled into a superb live outfit, but they have also begun to contribute to the songwriting.

This album consists of six new tracks, all medium length, no long epics here. Three were written by other members and the rest by Christian Vander. Also included are two bonus tracks from Vander’s personal archive, recorded in 1978. These bonus tracks hail from around the time of the Attahk album sessions. An important note to make is that the royalties from the track Dëhndë will all be donated in full to the Foundation Initiative Autisme. Kartëhl was recorded and mixed at UZ studio between March and June 2022 by Francis Linon, mastering taking place at Greasy Records by Marcus Linon with production by Stella Vander Linon.

As it is so difficult to describe, what Magma do needs to be experienced on a personal level by the listener so that they may get into it and gain a connection. That said, there does appear to be a shift in focus for this album. Overall there is a feeling of positivity and the music appears brighter, although there are times were the core darker themes of the music remain. This is a good thing, showing that even after all the long years of their journey they continue to adapt and produce music of high quality. They appear to be mining areas that they have visited in the past, which has given rise to an interesting new feel to this release.

As I mentioned, this is a newish line-up that has now become a formidable band, where more than half of their number are vocalists. This is clearly demonstrated in the change of direction that this album has taken; the vocalists are all over it, in a positive way. Couple this with Christian Vander’s drumming, which continues to be sharp and forceful throughout, driving the songs, ably supported by Jimmy Top’s bass, Rudy Blas’s guitar and keyboard contributions from Thierry Eliez and Simon Goubert and you have a heady mix.

The opening song, Hakëhn Deïs, demonstrates the positive direction being taken, starting with an almost happy rhythm, Christian Vander taking lead vocals with some lovely supporting vocals. Jimmy Top finds his groove with some great bass work, which continues into the next track, Do Rïn Ïlï üss, which was written by singer Hervé Aknin.

Irena Balladine has a lovely lounge jazz feel, the vocals leading the band’s crisp delivery of the song, which at five minutes in length appears to finish too soon, the urge to hit replay on it being strong. The Thierry Eliez penned Walömëhnd Em puts us a bit more back into familiar Magma territory, although not as dark as past works, it does have that notable vibe.

The next track is Wïï Mëlëhn Tü, written by Simon Goubert. It has an almost sinister start with an eerie chorus of voices over sparse piano and Vander’s drumming, with Hervé Aknin taking the lead vocals initially. Gradually, other instruments join in, causing a slight shift away from the sinister feel as the pace increases half-way through. The remaining songs are of a high quality too, and originally created in 1978 one wonders why they been hidden for so long. Also, how many more gems does Vander have in his personal collection?

This is an album with a newer direction, but containing enough of Magma’s uniqueness to be readily identifiable. With each play through the songs grow in stature. These songs definitely demonstrate what Magma can do so well and will sit comfortably alongside older pieces within the live setting. Magma have given us what I believe will be a well-received album which should please their dedicated legions of fans – and maybe win a few more. Who knows?!